Russell’s victory was his third consecutive Virtual F1 win following Spain and Monaco, giving him a 22-point leading the in the unofficial points standings after Charles Leclerc endured a disastrous race to 14th place.

Russell claimed pole position from Red Bull’s Alex Albon by a quarter of a second and held the lead at the start.

Albon slotted into second place, holding position just over a second behind Russell in the early stages. With both drivers starting on softs, Albon was the first to stop at the end of lap six while Russell stayed out, concerned about dropping into traffic.

Albon opted for hard Pirellis, coming out just behind the second Williams of Nicholas Latifi, while Russell stopped a lap later and decided to take mediums for the run to the end of the 26-lap race.

Russell was able to extend his lead to over four seconds thanks to a combination of his tyre advantage and the time Albon lost passing Latifi – with the gap peaking at just over 5.5s with five laps to go after the Red Bull driver made a small mistake.

Russell several times expressed concern about the deterioration of his tyres, but any concerns about Albon attacking him late on were allayed by a three-second penalty for the Red Bull driver.

Russell crossed the line just under four seconds ahead of Albon, with the gap adjusted to 6.857s in the final reckoning.

“I was a bit worried because I went onto the medium,” said Russell. “Alex went onto the hard and ordinarily you would expect me to gap him quite a lot in the early phase, but he stayed with me and I thought he was going to come back at the end.

“But he was fast, he was quite a long way ahead of the next one. I enjoyed it all, and good to win.”

He pitted on the same lap as Russell and had to battle his way through several drivers who ran long, including team-mate Anthony Davidson, but ultimately took a straightforward third place.

McLaren driver Lando Norris claimed his best Virtual F1 result with fourth place despite technical problems pre-event that he was concerned might have prevented him from getting to the end and also absorbing the impact of a three-second penalty.

He made a good start from ninth to fifth, then passed the Haas of Pietro Fittipaldi a few laps later to take assume fourth place.

Renault driver Oscar Piastri, making his Virtual F1 debut, took fifth place after a late charge, passing Fittipaldi with the assistance of the DRS on lap 17 to take the position. Although he had a five-second penalty added at the end of the race, Fittipaldi suffered the same fate.

Latifi finished seventh despite eight seconds of penalties, ahead of the second McLaren of content creator ‘Tiametmarduk’ with Davidson taking ninth ahead of Racing Point’s Jimmy Broadbent.

Real Madrid goalkeeper Thibaut Courtois survived a spin after being passed by Broadbent to take 11th, ahead of AlphaTauri debutant Pierre Gasly.

Leclerc had several incidents in the early laps, including collecting Fittipaldi when he had a half-spin, and committed to a two stop-strategy – complaining of understeer he suggested was potentially caused by the set-up of his sim given all cars had identical in-game set-ups.

AC Milan goalkeeper Gianluigi Donnarumma was 16th for AlphaTauri ahead of Deletraz – who claimed fastest lap.

The final Virtual Grand Prix will be held next weekend on the date original scheduled for the real-world Canadian Grand Prix. 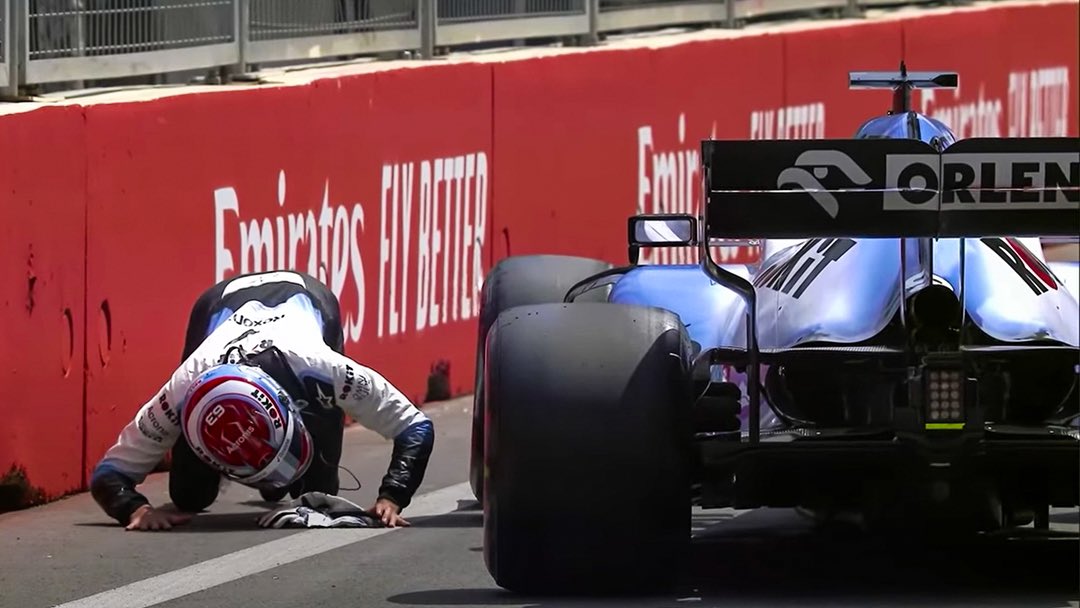