Hamilton was given a 10-second time penalty at Silverstone for being “predominantly” to blame for the collision that ended Verstappen’s race and sent him to hospital for precautionary checks.

However, Red Bull felt that the punishment was insufficient as Hamilton recovered from the penalty to win. It had also reported a $1.8m repair bill for the damage caused to Verstappen’s RB16B.

Red Bull lodged its petition to review last Friday, and a video meeting with the British Grand Prix stewards was held on Thursday at the Hungarian Grand Prix. 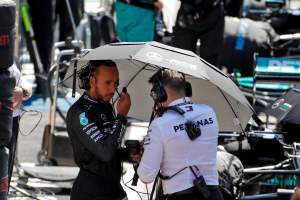 To succeed in getting the review, Red Bull needed to convince the stewards that it had “a significant and relevant new element which was unavailable to the parties seeking the review at the time of the decision concerned”.

But it has been unsuccessful. It means Hamilton’s 10-second time penalty stands and so does his race victory, which narrowed the gap to Verstappen in the championship to just eight points.

The stewards dismissed it on the grounds that Red Bull’s “new evidence” was presentations created by the team specifically for the petition.

These were partly based on GPS data available to the stewards at the time of the original decision, including the trajectories of Verstappen and Hamilton into Copse and “various alleged comparisons” between the lines taken by Hamilton and Charles Leclerc when Hamilton passed the Ferrari on the inside of Copse later in the race to win.

The view from above of *that* incident#BritishGP 🇬🇧 #F1 pic.twitter.com/O7QhraSNq0

Red Bull also created “simulations” of the incident and completed a “re-enactment” of Hamilton’s line driven by its test and reserve driver Alex Albon.

The stewards also said they noted “with some concern, certain allegations made” by Red Bull.

It is unclear what those allegations were but the stewards said that while they may or may not have been relevant and may have been addressed directly in any decision had the petition for review been granted, they are not being commented on because the petition has been dismissed.