Hamilton and Verstappen collided on the opening lap at Silverstone, with Verstappen eliminated on the spot but Hamilton going on to recover from a 10-second time penalty to win the grand prix.

On Thursday evening, the British GP stewards threw out Red Bull’s bid to have the incident reviewed, citing evidence that was “created” not discovered.

They also said they “noted, with some concern, certain allegations made” by Red Bull in submitting its case. 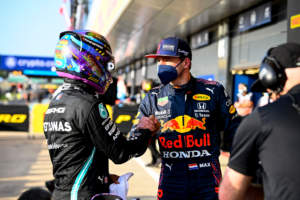 In the aftermath of the grand prix Red Bull had lambasted Hamilton, calling his driving “dirty”, “desperate” and “amateur”.

Mercedes issued a statement shortly after that verdict was published welcoming the stewards’ wording and criticising Red Bull’s conduct.

“In addition to bringing this incident to a close we hope that this decision will mark the end of a concerted attempt by the senior management of Red Bull Racing to tarnish the good name and sporting integrity of Lewis Hamilton, including in the documents for their unsuccessful right of review,” the statement read.

“We now look forward to going racing this weekend and to continuing our hard-fought competition for the 2021 FIA Formula 1 World Championship.”