Perez shows what Aston’s losing – and risking with Vettel

It’s fair to say that there has been a groundswell of sympathy coming into the Mugello weekend for the plight of Sergio Perez in the whole Sebastian Vettel-to-Aston story.

Seven years of helping the team punch above its weight, invariably as its leading scorer, and just as it’s on the verge of something big, he finds himself squeezed out between a four-time champion and the boss’ son.

The perception of injustice was only intensified after Tuscan Grand Prix qualifying where, despite being in the team’s old-spec car and Lance Stroll in the new – which was described by technical director Andrew Green as ‘a good step’ – Perez outqualified his team-mate by a scant few hundredths of a second. 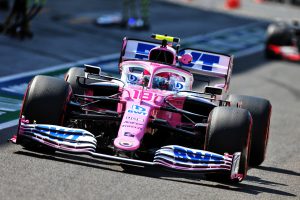 There were extenuating circumstances that might have worked against Stroll – and their positions on the actual grid will be reversed as Perez takes a one-place grid penalty for his collision with Kimi Raikkonen in practice yesterday – but it will have come as a satisfying outcome to Perez and underlined yet again his unerring ability to get the job done. Particularly as his replacement Vettel struggled all weekend and qualified half-a-second and nine places behind his Ferrari team-mate Charles Leclerc.

In the six dry qualifying sessions in which they’ve both competed, Stroll has outqualified Perez only once this season. The margins have tended to be small but they are in Perez’s favour. His average advantage in those six sessions is a scant 0.045s.

Stroll is well ahead in the points table. But aside from the two races missed by Perez to coronavirus, this is mainly thanks to the safety car cards gifting Stroll a podium at Monza while simultaneously denying Perez what had looked certain to be a very strong result.

Stroll is a perfectly capable racing driver. He has some talent, has pretty good racecraft, is quick in the wet and has scored two podiums in his Formula 1 career already. It would be fair to say that his deficit to Perez has narrowed this year too.

But as yet there must be question marks about his consistency, attention to detail, possibly even his motivation. But he’s got a secure seat for the future and is thereby perfectly placed to improve his game.

His higher position in the championship was the justification for him – and not Perez – being given the update for Mugello. There were only enough of the new parts – sidepods, brake ducts, front and rear wings – for one car coming into this weekend. Both cars will be to this spec in Sochi for the next race.

The update is reckoned to be a powerful one and it was clear through the practices and into qualifying that Stroll was regularly the faster Racing Point.

In both Q1 and Q2 he needed to do only one run whereas Perez needed to go out twice to make his graduation to the next sessions secure. This meant Perez had only one set of fresh soft tyres for Q3, whereas Stroll had two.

Perez went out between everyone else’s first and second runs to ensure a clear track and his lap shaded Stroll’s by 0.045s – but with Stroll looking to improve on that banker lap on his next set of tyres.

He was denied that lap by the yellow flags for Esteban Ocon’s Poggio Secco spin, so leaving the pink cars sixth and seventh.

As ever, Perez played the team game perfectly afterwards while simultaneously making his point, saying: “It’s a good result. Unfortunately I’m giving back the position, happily so, to my team-mate.

“We didn’t seem to have quite the pace we wanted today. I think my lap in Q3 was good, putting everything together.

“The upgrade package looks good so I think it’s going to be a good step forwards in Sochi so hopefully we can close up the gap to the Red Bulls”.

“It was a little bit frustrating out there today,” said Stroll. “I think we could have qualified in P4 or P5 without the yellow flag on the final runs in Q3. I’d set a comfortable banker lap on my first run and I think I was set to improve significantly on my second.”

Vettel’s difficult run at Ferrari continued as he was left trailing in 14th, over 0.3s adrift of the Q3 cut-off and 0.5s slower than team-mate Leclerc.

It’s probably fair to say that Leclerc is a tougher team-mate than Stroll and the comparison between Perez’s and Vettel’s performances here shouldn’t be coloured too much by that.

But Vettel does need very specific traits from a car to be at his best, traits that are sorely lacking in the current Ferrari and which Leclerc is doing a quite brilliant job in driving around.

Leclerc was probably gifted a grid place at Stroll’s expense in that he got his second Q3 run in, unaffected by the yellow flag. But he still had to deliver a superb lap to go fifth-quickest.

Although the contrasting performances of Perez and Vettel lend further fuel to the arguments of those believing Racing Point has not made a good decision, the reality is that Lance Stroll being a racing driver is the only reason the team is now in position to deploy the resources it has always dreamed of and he was never going to be one required to make way for the recruitment of the high-profile champion.

The other part of that decision – Vettel replacing Perez – has an element of risk. But Lawrence Stroll has never been shy of making a calculated risk.