Perez’s 1m30.187s on C4 tyres was just over a tenth quicker than what Valtteri Bottas had managed on a softer tyre to top Saturday’s running. 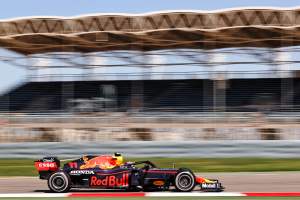 Ferrari’s Charles Leclerc spent the majority of the Sunday morning session in first place, courtesy of a strong low-fuel effort just 20 minutes into the day.

The Monegasque used the medium C3 tyres to log a 1m30.486s, which was instantly both Ferrari’s best time of what had previously been a fairly low-key test for the SF21, and three tenths quicker than what Leclerc himself had managed on C5s the day prior.

None of the other teams were this fast out of the blocks, but Perez did progressively up his pace over the next couple of hours and finally surpassed Leclerc midway through the third hour with a 1m30.309s on the same spec of tyre.

Within the next hour, the new Red Bull driver would fit the C4s too, and though the change of compound brought only a minor lap time improvement it was enough to put Perez top of the overall test leaderboards – after which he focused on pitstop practice.

That’s @SChecoPerez done for pre-season #F1Testing ✅ Completing 49 laps for the morning with a fastest time of 1:30.187 🤘🏁 pic.twitter.com/u13MOB6Dyf

While McLaren didn’t complete a sweep of Bahrain test morning sessions after topping the first two with Daniel Ricciardo, Lando Norris was just half a second off Perez’s pace with a C3 effort.

AlphaTauri driver Pierre Gasly did back-to-back fresh C4 runs and was quicker in the first than in the second, ending the day and his test programme in fourth place.

The rest of the pack were a second or more down, with the C3-shod Alpine of Esteban Ocon leading Haas rookie Mick Schumacher, who logged his team’s best lap of testing yet on C4s, and Bottas, who didn’t bother with any of the softer compounds.

Williams driver George Russell logged 77 laps in what was his first session of the pre-season test, as he ended up eighth-quickest.

Alfa Romeo’s Kimi Raikkonen and Aston Martin’s Lance Stroll appeared to focus entirely on heavy-fuel running and thus propped up the timesheets. But they were first and joint-third (with Leclerc) in the mileage rankings, split by Bottas.