During the three days of testing, we’ve been able to have a close look at the packaging of the rear end of the Red Bull RB16B, which was such a closely-guarded secret when the car was originally launched.

Looking at the rear suspension, it does follow the Mercedes lead in moving the rear lower wishbone forward leg rearward. The best way to describe it is as reversing the normal suspension layout. 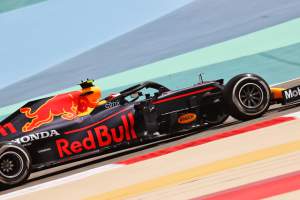 You then have a toe-link behind the driveshaft, which is adjustable to change the toe settings. It mounts between the upright and the gearbox or rear crash structure.

All of this will have a V-shaped upper wishbone with a single outboard mount to the upright and a double mount inboard.

What Mercedes and now Red Bull have done is to move the lower wishbone behind the driveshaft (red). It doesn’t have a typical V-shaped wishbone, but instead, both legs of the wishbone are contained in a bigger aerodynamic shroud (yellow).

It will still have three mounting points with two inboard mounts to the gearbox or crash structure and a single outboard mount to the upright. The adjustable toe link (green) is now in front of the driveshaft.

The outboard end pick-up is on the upright and the inboard pick-up on the gearbox is in a similar position to last year’s lower wishbone rear leg, which was nearest to the driveshaft.

This different configuration will have an effect on the loads in each component but all this is resolvable, maybe not that efficiently but acceptable to save Red Bull spending tokens on a new gearbox or crash structure.

I’ve sketched how this configuration might work, with the forward leg of the wishbone curved-forward around the driveshaft to use the same mounting point as last year.

The top wishbone is very similar to last year.

All of this is to reduce the blockage between the tyre and the body profile and also set up more of a turning moment in the airflow rearward of the driveshaft to help the diffuser’s performance.

We have gone through the reasons for the suspension changes and how it’s all about reducing the blockage and this is what it all adds up to. But looking at the packaging of the rear end as a whole and the design detail, this looks really good to me. The top wishbone to top of upright and pull-rod detail is a thing of beauty.

We can also see the slot gaps across the top trailing edge of the diffuser. These slot gaps curve around into the side vertical wall.

All of this is to allow that extra flow across the upper surface of the diffuser to work the underneath of the diffuser harder and connect the outer section to the low pressure behind the rear tyre. Doing this will make the whole back of the car work as one, effectively increasing the volume of the diffuser.

The lower half of the wing-shaped vanes mounted on the inner surface of the rear brake ducts have been reduced in width for this year. But combined with the ones on the top half of the duct, they are still very powerful.

They have two real purposes in life. The first is to pull airflow out of that area inside the rear tyre and reduce the amount of flow being pulled into the diffuser. The second is to generate a small amount of downforce, which goes directly into the upright

This is very valuable downforce as it doesn’t suffer from any lag by going through the suspension system, which is always on the move.

If we look under the diffuser, we can see the strakes that have been shortened by 5cm. This means they can be level with the outer section of the floor, which is called the step plane, but as we can see they are actually shorter and the lower edge is angled upwards as it goes rearward.

We can also see some small slots in the lower edge, which will set up a series of vortices. The reason for the angle is to allow the vortices room to initiate and to increase in size as they go rearward.

Sometimes you can make something work better by reducing its size and using the more or less invisible vortices to make up for that reduction.

Mar 14 : Why it really is advantage Red Bull after F1 testing
Thank you for your feedback!