For Lando Norris, 2021 is both a career-making opportunity and the toughest challenge he’s yet faced.

On the one hand, Carlos Sainz Jr’s departure gives him the chance to establish himself as McLaren’s main man.

But on the other, he’s pitted against one of the toughest team-mates anyone can face in ex-Renault driver Daniel Ricciardo.

Norris is as well prepared as he could hope to be at this stage of his career to take on Ricciardo. Though still only 21, his first two Formula 1 seasons were impressive and he stacked up well compared to the highly-rated Sainz.

“I’ve seen Carlos do many things better than Daniel, but there’s also a lot of things that Daniel probably does better than Carlos” :: Lando Norris

But while the statistics, particularly in qualifying, were relatively even, Norris was still the junior partner in terms of his overall performance. That’s to be expected given his relative inexperience and the fact Sainz has become a superbly well-rounded driver.

In qualifying Norris had a slight edge in the head-to-head comparison, but once you adjust this to eliminate anomalies Sainz had the advantage – though not by much.

On race day, Sainz outscored Norris 105 to 97 last season – despite Sainz’s large amount of misfortune – although in 2019 bad luck for Norris exaggerated the 96-49 points split between the two. At their best, the level is similar but Sainz has been more consistent.

All things considered, that still represents a strong start to Norris’s F1 career and creates a platform from which he can realistically aspire to take on Ricciardo.

He makes no attempt to hide Ricciardo’s experience advantage, but there’s no doubt he will also fancy his chances given the advantage of being the incumbent driver at McLaren.

“It’s a little bit into the unknown because I’ve only had one team-mate in Formula 1, so it’s hard to know what to expect from somebody different,” Norris tells The Race. 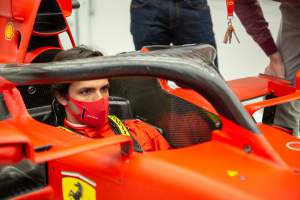 “But I rate Carlos extremely highly, as do Ferrari. I don’t feel like I wasn’t going up against anybody competitive and Daniel is going to do something incredible [in comparison to Sainz].

“I’ve seen Carlos do many things better than Daniel, but there’s also a lot of things that Daniel probably does better than Carlos.

“He’s a different driver, but he’s not going to be tenths faster than Carlos. Maybe there’s better consistency or better feedback, he’s able to do a better job in qualifying or he’s better at tyre saving, there’s these small things that he can do slightly better in.

“A lot of it is just going to be from his [Ricciardo] experience of being with a lot of different teams in Formula 1 and at a Red Bull team which has won races lately.

“I can’t wait for the opportunity to learn from someone like that, rather than feel worried or anything like that.”

Norris has certainly used being up against Sainz as a learning experience. The ebbs and flows in the battle between them – won by Sainz but with Norris not too far behind – reveal much about their relative strengths and weaknesses.

They also had a capacity to cover each other’s weak points in terms of what car limitations they struggled to compensate for.

“We have different driving styles so sometimes a track or certain corners suits Carlos much better and sometimes they suit me much better,” says Norris. “Sometimes, one of us is more in a rhythm or much happier with how the car is and even when it’s not the perfect car, we’re still happy.

“There’s certain things that need from the car. When I don’t, I struggle a bit. It’s the same for Carlos.

“When one of us is off the pace or generally struggling or looking like they’re not in a good rhythm, it’s because there’s some certain things on the car or way the car is set-up that’s just not giving that driver that confidence to be able to lean on it.

“I think that’s what I suffered with a little bit in the middle of last season, it was from some of the upgrades, the newer parts that we had.

“Carlos and myself were very close on pace. When one of us is much ahead, sometimes it’s because they’ve done a very good job and they’ve nailed the lap. But more often than not, it’s because one of us is struggling with the set-up or the confidence in the car. That’s our excuse!”

Interestingly, there is a very clear difference in the limitations they struggle more with. Going right back to his early FP1 outings with McLaren in 2018, it was clear that Norris wasn’t afraid of the car moving around.

Sainz has always been at his best with good rear stability and sometimes struggles in conditions where Norris’s skillset is ideal. No driver likes rear instability but some are better equipped to deal with it than others. By contrast, when the car is more limited by understeer, particularly mid corner, Norris can find it more difficult to generate the required rotation.

Presented with this comparison of their driving styles, Norris reveals a little more about their differing approaches.

“I’m not going to give everything away obviously, but it’s along the right lines,” he says. “Carlos is quite a smooth driver, but quite an aggressive one. He forces the car quite a bit, so when he doesn’t have that stability that’s when he loses that bit of confidence.

“It’s a similar thing for me, but impacts Carlos that little bit more. In certain corners, you really need entry stability, when you can’t do what you normally do, or want to do, then it becomes a problem.

Norris has been working on broadening his skillset as a driver. Even in 2019, such as in the post-season Abu Dhabi test where he talked of experimenting with his style, he was working on this. And given the 2020 McLaren was one of the trickier cars to drive on the limit, that has clearly paid off even if there’s more to come.

“It’s something I’ve been trying to do, have that adaptability to drive some corners like Carlos does,” says Norris of broadening his style.

“Some corners, Carlos can really maximise and do a better job than me and there’s corners that Carlos can’t match what I can do. It’s giving me that wider operating area, to be able to maximise every corner if possible and be able to change my driving style from what I’m comfortable with.

“It’s learning from Carlos in some ways, how he drives and being able to change my driving style to match what he does sometimes. It’s not to drive like him, it’s just having those one or two corners where I need to lean a bit more towards his driving style rather than trying to do my driving style.”

As well as the outright pace, the Sunday battle with Ricciardo will be particularly demanding. The Australian is outstanding on race day and has a deserved reputation for decisive passing moves.

That capacity to be aggressive and judge it right was one area McLaren wanted Norris to improve on in 2020, with mixed results.

And even though Norris has proved to be an effective tyre manager, it’s possible Ricciardo might have an extra dimension to that side of his game. It’s going to be another learning opportunity for Norris.

While what happens on track will be the defining factor in the battle between Norris and Ricciardo, the off-track elements are also important.

This is the other area where Norris needs to take another step, having already improved significantly from 2019 to 2020. He is a more assured character in terms of offering the team feedback and giving input to the technical direction and dedicated more to this side of his game last year than in his rookie season. 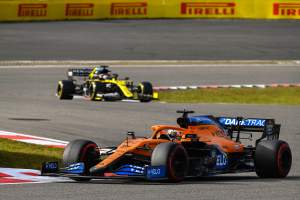 Even if there might be a natural desire to defer to the experienced newcomer, Norris can’t afford to carry a junior partner mindset into 2021 or he risks being permanently cast as one.

“I’ve been able to lead my own conversations a lot more, lead in decisions and future projects,” says Norris of his contribution to the team off track.

“Not just thinking about how to maximise that car in the race, but what to look ahead to and prepare for in the next races and next year and in the future.

“Almost one of the biggest things, apart from the on-track stuff, it’s the off-track confidence and being able to say what I want from the car, what I need from the car to do a good job for myself.

“In 2019 and even 2020, I was very critical of myself and saying I’m not doing a good enough job, but there comes a point when I have to be – not selfish – but have got to say I want this from the car and I’m blaming the car for not giving me that confidence.

“I’ve learned how to just say ‘I will be doing a better job if you can make this better on the car’, because it will give me better confidence. Maybe it’s not better on the car, but mentally for myself, for my own performance. 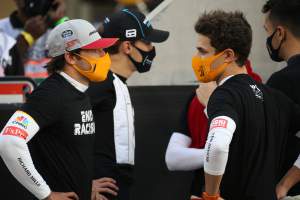 “Things like that improve performance and improve consistency. That’s almost one of the biggest things that has changed.”

How Norris will fare against Ricciardo remains to be seen. But F1 drivers are competitive beasts and Norris will be very well aware that this is his chance to cement himself as the key driver for McLaren as it continues its climb back up the F1 grid. Regardless of how McLaren performs this year, the intra-team battle will be significant.

But even if he ‘only’ performs as well compared to Ricciardo as he did against Sainz, and in a worst-case scenario he’s still likely to do well given his qualities, that will still be a job very well done.

There’s a tendency to view team-mate battles as a zero-sum game when it isn’t the case and what really matters is the comparative level.

Rest assured, Norris won’t be going into the new season aiming to be close behind Ricciardo. This is his moment to shine and it could play a decisive role in how he’s perceived as a driver in F1 for the long term.