Norris stands by criticism of lost P3: 'I let everyone down' - The Race
Skip to content
Formula 1

Norris stands by criticism of lost P3: ‘I let everyone down’

Lando Norris felt he “let everyone down” with a crucial track limits infringement that cost him and McLaren a surprise third place on the grid for Formula 1’s Imola race.

Norris was one of the Saturday stars at the Emilia Romagna Grand Prix as McLaren flipped an unspectacular Friday into a qualifying session that it spent rivalling Mercedes and Red Bull.

New signing Daniel Ricciardo struggled to match Norris throughout, and the young British driver briefly grabbed a provisional front-row start on the final runs in Q3.

That lap was eclipsed by Sergio Perez but Norris should still have started ahead of Max Verstappen, only to lose the lap because he went beyond the white line at the Piratella left-hander. 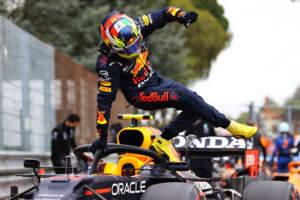 Turn 9 had caught out more than half the field in final practice, Norris included, and he was hugely critical of himself after falling to seventh on the grid, one place behind Ricciardo.

Norris told TV crews after qualifying he “let everyone down”, that he “didn’t want to make any mistakes and made a big one”, and was feeling “pretty disappointed in myself”.

Asked by The Race a little while later if he felt he’d been harsh on himself in the moment by stating he let the team down, Norris said: “No, I still agree with what I said. It’s what I did, it should have been P3. So, I’m not happy about what I’ve done, am I?

“I think there were a lot of positives from the session, the fact I actually could have been P3 I think is a huge positive for us. Just how the whole of qualifying went I think was very strong, and it wasn’t just Turn 9 which was a good corner, the rest of the lap was also very good, sector one was strong. 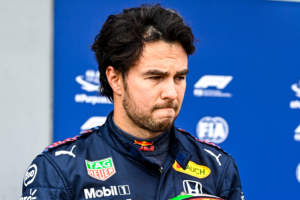 “It’s not an easy track to overtake on. Of course, I agree with the comment that I made because it’s exactly what I did.”

Norris was one of six drivers to lose a lap time because of a Turn 9 infringement in qualifying, while there were four other deletions for track limits at Turn 15.

He said it “came as a surprise” because his line “wasn’t too different” to previous laps and he did not expect it to be deleted.

“I didn’t know at the time,” he said. “I didn’t think of it when I was doing my lap or anything.

“But I think the reason I think that is because all my other laps were very close and very similar, obviously just a few centimetres further left.

“When you’re driving the car you don’t really feel those couple centimetres all the time.”

Norris said the profile of the corner, the width of the track and the kerbing all play a part in Piratella being so difficult to judge as a driver and reckoned it’s made to look easier than it is.

His team boss Andreas Seidl admitted there was an “initial short disappointment” seeing the lap deleted, but gave his self-berating driver a hug afterwards.

“That’s typical Lando,” Seidl said when asked by The Race about Norris’s criticism.

“That’s part of his character that he’s very self-critical. I’ve seen it also in previous years.

“At the same time, he’s a guy who manages to put that aside, at the latest tomorrow morning. And with a full refocus on the task ahead.

“He did a sensational job in this qualifying session, he was flying, it’s great to see how comfortable he feels in the car.

“And situations like today, he got a hug from me after the session, which he doesn’t like. But I’m sure he will be back to focus tomorrow morning.”