Sergio Perez was surprised to land a career-best Formula 1 start at Imola and inflict a first team-mate qualifying defeat on Max Verstappen since 2019, given he still feels “miles away” at Red Bull.

Perez endured a chastening first qualifying session for Red Bull at the season opener in Bahrain three weeks ago, getting knocked out in Q2, and appeared to be struggling for one-lap performance again through this weekend’s Imola event.

He was almost six tenths slower than Verstappen in final practice and struggled at the start of qualifying, needing two runs on softs in Q2 to outpace Verstappen on mediums.

“I wasn’t expecting to be here at the moment because I feel that I’m miles away from where I should be, things are not coming naturally yet” :: Sergio Perez

The decision to forsake mediums in Q2 was made as Perez felt running the soft tyre would be vital extra preparation for Q3 given he is less comfortable in the car and missed out on Q3 in Bahrain, and avoided the complication of switching between compounds.

Perez came alive in the final part of qualifying as a result, lapping just a tenth slower than Verstappen on their first runs and pipping his team-mate to second on the grid with a last-gasp improvement.

He was a quarter of a second quicker through the first sector and a tenth faster in the second sector than he had been in Q2, and even felt a small error at the final corner was all that cost him pole. His last Q3 lap was slightly slower in the third sector than his first lap and his Q2 pace.

Asked by The Race to explain where that step came from in the final part of qualifying, Perez said he had just understood “where to get the time”.

“I have a pretty good reference in Max, he’s just getting 100% all the time out of the car and I am just adapting myself to it, just learning step by step,” said Perez. 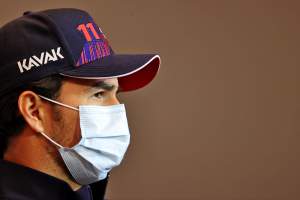 “I wasn’t expecting myself to be here at the moment because I feel that I’m miles away from where I should be, things are not coming naturally yet.

“So it’s a good boost in confidence, not just for myself also for the team to make them feel that they have both drivers and we can push the team forward together. That’s the important bit.

“And hopefully from here on, we just keep that progress, and tomorrow we do another step in race performance.

“It’s the target just to keep improving step by step. I’m not in a hurry. I know that I’m not where I should be.

“But certainly it’s positive to be up here, just in my second race with the team.”

“If there is a place that you don’t want to come in your second race with a new team, it’s probably Imola” :: Sergio Perez

Perez, the 2020 Sakhir Grand Prix winner, had produced an excellent comeback drive in Bahrain after starting from the pits following a formation lap car shutdown, as strong race pace has been easier for him to achieve than qualifying performance.

He explained after the unexpected Imola result, the first time since Canada 2019 that Verstappen has been outqualified by a team-mate, that he is making “big steps” and “learning something new” every time he drives the Red Bull.

“If there is a place that you don’t want to come in your second race with a new team, it’s probably Imola,” Perez said.

“It’s one of the most difficult circuits around to put a lap together, as Lewis [Hamilton] described everything is so narrow you’re millimetres all the time from the grass.

“So to be here in my second race is a pretty good step from our side, which shows definitely we are making good steps, but I think at the moment the most important thing is that we will keep making those steps, we understand why we went quick, and we can keep that level of consistency in just getting better.”

Verstappen’s final run was badly compromised after just a few seconds as he had a slight wobble through Tamburello chicane and ended up dipping his left-side wheels over the grass.

“I mean I know that Honda makes good lawnmowers, but I don’t think this one is suited for that! At least I tried,” Verstappen joked.

That left him 0.16s down on Perez after the first sector but he was still matching Hamilton – who had lost time himself through the first couple of corners. 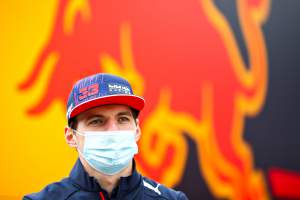 Unfortunately for Verstappen it was just the start of a “scrappy lap”, with the main messiness coming at the Variante Alta just after he had set the best middle sector of anyone.

“I haven’t had that in a long time so we just need to understand why that happened,” said Verstappen.

“It has been going really well for a very long time. Unfortunately we are not robots. I can’t programme myself like that.

“Sometimes it happens that you make a mistake.”