Yuki Tsunoda’s practice crash in Monaco prompted Red Bull to commit to relocating him from the UK to Italy as the struggling Formula 1 rookie needed a “big change”.

Tsunoda’s much-anticipated first F1 season started with a strong drive into the points on his debut in Bahrain but it has stalled since then.

A radio outburst, qualifying crash and spin during the grand prix were the main takeaways from the second race at Imola, then Tsunoda was left baffled by his lack of pace in Portugal.

His frustration boiled over in Spain, where he ranted over the radio and briefly suggested he didn’t have the same machinery as team-mate Pierre Gasly after a poor qualifying. 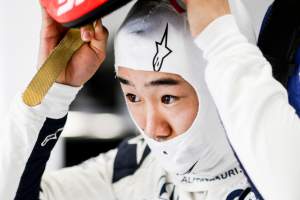 Then in Monaco, Tsunoda hit the wall in Thursday practice and lacked pace over the rest of the weekend. His 16th-place finish extend his point-less streak to four races – while Gasly has scored points in each of those grands prix.

Tsunoda has revealed that on Saturday in Monaco, after a Thursday FP2 crash he called a “stupid mistake”, he was told by Red Bull he would be moved from Milton Keynes to Faenza – something Tsunoda says he was keen on doing earlier in the year.

“When I crashed in FP2 it was not a good thing,” he said when asked by The Race about the move and the perceived benefits of it.

“Red Bull was not happy with that. We were talking to Red Bull and AlphaTauri, that it’s good to have a big change for me, because I think in the last three or four races, I haven’t had good races and [I needed] to change something.

“They decided for me to move to Italy, to have more chats with the engineers and to also go to the factory and have an opportunity to talk about the car.

“That’s a really good decision for me. Actually, I was asking Red Bull from the beginning of the season if it was possible to move to Italy, but they said at first ‘no’ so I was staying in Milton Keynes.

“But actually I can now I can go to Italy and spend a bit more time with the team. So that’s positive for me.”

Tsunoda will come under closer supervision from his team principal Franz Tost, who scheduled his first week in Faenza after the Monaco round.

Tost scheduled “most of the plan” for Tsunoda in that week, the young Japanese driver said.

“From 9am, a gym session until 11,” Tsunoda said. “I never had this experience of a big morning gym session.

“And 11 to 1230 was engineering meetings. Then lunch, and also English lessons. My English is not perfect. So I think it was good, an opportunity to learn English.

“I didn’t enjoy last week! But it is what it is. The engineering meeting especially makes for a really good understanding of the car. And that was really good preparation for this week.”

Tsunoda’s other focus so far this season has been getting his use of the team radio under control.

He recently told F1’s official Beyond The Grid podcast it was “the main topic” for him, accepting he was “fully out of control” with his outburst in Spain.

“I don’t know why but I had to shout at them. This is definitely now my weak point and I have to now really improve on this.

“From there it was getting better. It could be [even] better.”