Formula 1 world champion Lewis Hamilton says he doesn’t understand the constant increases in the weight of modern cars and believes these also clash with sustainability targets.

An engine minimum weight increase and revised tyres contributed to a 6kg weight gain for this season’s cars despite them being carried over from 2020 to save costs amid the COVID-19 pandemic.

Next year F1 will introduce a major technical overhaul and the minimum weight will rise significantly – and even more than planned – with a 38kg increase to 790kg.

Mercedes driver Hamilton said it was bad for racing and the increased energy wastage also didn’t match F1’s push to be more sustainable, as the heavier cars require “bigger brakes, [produce] more brake dust [and need] more fuel to get you to the location”.

“I don’t understand why we go heavier,” said Hamilton on Thursday ahead of the Azerbaijan Grand Prix, when asked by The Race about F1’s trend of consistently gaining weight and how different modern cars are to those from the 2000s. 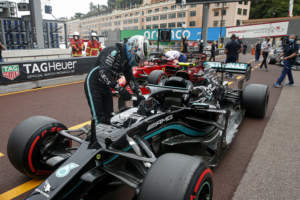 “I don’t understand particularly why we go heavier when there’s all this talk about being more sustainable and the sport going in that direction.

“The lighter cars were more nimble, were not nowhere near as big, and so racing, manoeuvring the car was better.

“The tracks we’re going to are getting wider. Here [Baku] is quite wide in places, of course it’s narrower in other places.

“Monaco was always relatively impossible to pass but now the car’s so big that it’s too big for the track.”

The adoption of hybrid engine technology is the single biggest contributor to F1’s significant increase in minimum weight in recent years.

F1’s minimum weight rose just once from 2002 to 2009, when the first Kinetic Energy Recovery System (KERS) was introduced.

It has risen in 10 of the 12 seasons since, with the switch to V6 turbo-hybrid engines in 2014 sparking a 49kg increase – the largest individual step from year-to-year.

Safety advances and rule changes related to car design, like making the cars bigger in 2017 or stipulating 18-inch wheels for 2022, are also significant factors in the constant creeping up of the weight limit.

Alfa Romeo’s Kimi Raikkonen, who made his debut in 2001 and is the most experienced driver in F1 history, said the gradual rise has disguised the impact – but suggested it would be futile to try to revive that era of car design.

“It’s very difficult to even remember how they felt like,” said Raikkonen of the refuelling-era cars, in response to The Race’s question.

“I’m sure if we drove them today, comparing the two would feel an awful lot different.

“But then when you increase it little by little over the years, it becomes very normal for us.

“What is it, more than 100 kilos now already? It’s a lot. And when you see the old cars next to this year’s cars or even the last few years, it’s how small they look…

“We’re not here to design. We could still race the mid-2000 – or whatever year you want to pick – cars and it wouldn’t make any difference to race.

“You’d just waste an awful lot of money on the way to get there and nothing else has changed.”