Lewis Hamilton called his front-row Formula 1 qualifying result at the Azerbaijan Grand Prix “monumental” for Mercedes, and put it down to a “night and day” improvement from practice to qualifying.

Mercedes looked in for a particularly long Saturday afternoon in Baku, having toiled badly in Friday practice and then seemingly not looking much improved in FP3 this morning.

But Hamilton was immediately over one second quicker in the first segment of qualifying than he had been in FP3, and looked in the mix for pole position – eventually having to settle for second when a Yuki Tsunoda/Carlos Sainz Jr red flag curtailed qualifying early.

“We definitely weren’t expecting that,” said Hamilton, who described his lap as “OK” – in slight contrast to Charles Leclerc’s assessment that his pole lap was “quite shit”.

“And this is such a monumental result for us because we’ve been struggling like you couldn’t believe all weekend.

“You can see it. We kept our composure, we continue to have difficult discussions in the background, and challenging one another, and just never taking no for an answer.

“We’ve moved around, made so many changes over these two days, you’re just chasing your tail and it’s been so difficult.“ 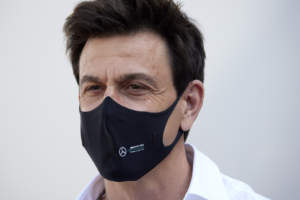 Team principal Toto Wolff declined to precisely explain what Mercedes had changed but said the scale of the “experiments” conducted had been huge.

“We were just experimenting in FP3. The job that has been done back in Brackley and also Brixworth and by the engineers here, designing a programme that we went through line by line by line, some experiments useful, some not, and at the end we had so many more answers to our questions and had a car that was good,” Wolff told Sky.

“It’s all interlinked. There’s not one single thing. It’s about the aero balance, about the right amount of downforce, the temperatures in the tyres and then obviously the balance.”

Hamilton described the improvement as “one of the greatest feelings”, given that his W12 “has not been happy all weekend”.

“It’s been a bit of a disaster. To be up there, and even Valtteri [Bottas] getting into the top 10, that’s a massive leap and that’s just really down to great teamwork”.

When quizzed further in the post-session press conference, Hamilton clarified the big “night and day” improvement was not overnight but rather between FP3 and qualifying, and that the car was “still a disaster” in third practice.

“It was really just about getting the tyres to work. We couldn’t get the tyres to switch on like the others can. The ‘night and day’ difference was feeling the tyres working,” he explained.

Asked by The Race how Mercedes had cracked the downforce balance needed – as on Hamilton’s car it appeared by qualifying to be running low downforce without sacrificing speed in the twistier parts of the lap – Hamilton spoke at length about the scale of the work Mercedes had conducted and how Friday’s crisis had been handled.

“It’s really kind of hard to explain the emotions that I’ve gone through for the past day,” he said.

“And when we’re talking about the set-up changes it’s difficult for us to understand why we’re in the position we’re in, because we’re trying lots of different things and we don’t always get the results that you’re expecting to get. 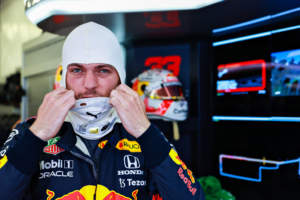 “And then when you do that, I had a lot of anxiety because I don’t know if you’re going to get it right, or get it wrong and it means that you’re out of the top 10 like we were earlier this morning and then yesterday.

“You just have to let it go. We were here last night till 11 o’clock and again for the session 10 minutes just before we’re still making small changes and we just have to shake it off and go for it.

“It’s an amazing feeling. I think we’ve got the right balance. Do we have the perfect wing? I’m sure you could always say you could have a slightly better balance, but it did the job today.”

Wolff said this was the drivers’ own choice and there was “not a lot in it”.

Bottas gave Hamilton a tow on his first flying lap and ended up only 10th having not benefited from a slipstream himself.

“Valtteri was just unlucky today, he could have been in the top five,” said Wolff.

“We have the rule at the beginning of the season that any driver can decide whether he wants to go first or second.

“This weekend it was Lewis’s call and he decided to go second so it was nothing surprising.”

Hamilton added that he now anticipates a different race than the one he had been bracing for after practice.

“Our race pace was a lot better than single-lap pace,” he said.

“We were miles off in a single lap and we were a lot closer in race pace.

“We don’t understand why, but I like to think hopefully we are in that same position.”

Wolff agreed that if Mercedes had managed to pull off its single-lap pace recovery without compromising the long-run form it had showed on Friday, it now looked very strong for the race.

“The long runs were very good. I would say yesterday they were on the same pace as the Red Bulls,” he said.

“So I think we have a decent shot at a good result tomorrow.”