McLaren is taking a “cautious” approach to restarting work on major infrastructure projects, including its new windtunnel and simulator, despite the boost of a £150m loan from the National Bank of Bahrain.

Team principal Andreas Seidl says he is “very happy with the news from yesterday” that the NBB had approved this financing facility, which has solved McLaren’s immediate cashflow problem and which he described as “an extra boost and extra motivation”.

McLaren has greenlit several major projects in recent years, including the new windtunnel and building a new driver-in-loop simulator, as part of its strategy for re-emerging as a race-winning team in Formula 1 – having been in the competitive wilderness since its last victory in the 2012 Brazilian Grand Prix.

The works were put on hold when the COVID-19 pandemic struck, but despite the cashflow boost and the imminent restart of the F1 season, uncertainty over its income means these have yet to be restart.

“At the beginning of this crisis we simply had to put on hold all the infrastructure projects we were working on,” said Seidl when asked by The Race about its infrastructure plans.

“And even now, with not knowing exactly how the income will look like during this year, we’re still cautious there and simply have to wait until we have the green light.

“As you can imagine, I’m pushing hard to get the different infrastructure measures in place again as quickly as possible.

“This will be key on our journey back to the front in F1 as well because we simply have a deficit compared to the front teams.

“I’m quite optimistic that once we are through this crisis, we’ll get back on track with our infrastructure.”

Despite McLaren Group’s financial worries, with the organisation needing to lay off 1200 staff – including 70 on the F1 team – Seidl is optimistic these projects will be able to restart soon.

McLaren has talked of the need to source £275m in new financing, with the NBB loan allowing it to continue to operate as normal while working on the long-term financial picture.

F1’s new regulations, originally planned for 2021 but pushed back to the following year when the COVID-19 pandemic struck, were targeted as a key opportunity for McLaren to take a stride forward in terms of competitiveness.

This year’s car was designed with several key concept changes designed to allow the team to explore and exploit some of the more advanced aerodynamic characteristics that are key to the supremacy of F1’s big three teams – Mercedes, Ferrari and Red Bull – with the aim of being better-placed to integrate these lessons into its cars for the new rules.

Seidl still believes the next 18 months of racing the current-spec cars will allow it to make significant gains, despite the unavoidable financial impact of the current situation on the race team and the question marks over income caused by uncertainty over exactly how many races will be held this year.

“The financial challenges, for example putting all the infrastructure projects on hold, didn’t help but with the funding we have in place now, together with Zak [Brown, McLaren CEO] I’m working flat out in order to get these projects restarted again as quickly as possible,” said Seidl.

“We still need to be cautious because we still don’t know exactly how the income will actually look like this year. The race calendar is something which is quite fluid and dynamic.

“But at the same time I’m quite optimistic that we get all these projects back up and running again in the future.

“Where we simply have a gap, compared to the top three teams, in terms of how we work together, how are we set up as a team, the tools we’re using – do not really see that we have a major delay down to the break we had regarding the plan.”

He stressed that the reaction to the financial impact of COVID-19 has not had an impact on McLaren’s capacity to develop its car and introduce upgrades – a programme that will start in Austria this weekend.

This is despite the added distraction of being the only team to have to modify its car to fit a different engine next year when it switches from Renault to Mercedes. 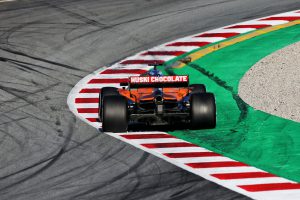 What McLaren has to forfeit because of Mercedes switch
Read more

“The financial challenges we were in and the measures we put in place quite early on, in parallel with the shutdown, didn’t really affect output for this year or next year,” said Seidl. “So, we are on course with the plan we have set out over winter.

“We are planning to bring updates regularly from Austria onwards, on the car, and at the same time we are flat out working on getting next year’s ready with the biggest topic being the integration of the Mercedes power unit.”

While McLaren is not out of the woods yet given its ongoing search for new finance, with the possibility that it might have to sell a minority stake in the team to get that level of cash injection, Seidl is happy with the way the economic crisis has been tackled.

He admits to having been worried about the financial situation, which is indicative of how serious the economic challenges are for a group that has been badly hit – particularly on the automotive side thanks to showroooms closing and car sales plummeting.

“It a was a big challenge and it was a tough period for the team,” said Seidl. “We had to put some measures in place quite early on to make sure we get through this crisis – sending people on furlough, pay cuts for the team and for the drivers.

“Looking back now, I think we did all the right measures in order to get through the crisis. It was obviously not nice for me being in charge of the team, not being able to communicate a lot of these messages face to face to our colleagues. Doing it via email via videos is not what we like to normally do, but there was no other option.

“At the same time, with the positive news we had yesterday about the funding, which is in place now, it’s an extra boost and extra motivation for all of us here in the team now to fully focus again on what we like to do most and also do best, which is focusing on developing a good race car and racing it.

“I got the question many times if I was worried at all about the financial situation of McLaren. Of course, it was a tough period, but at the same time I am in a permanent exchange with Zak and I always knew what was going on the financial side.

“And in the end, Paul Walsh, our chairman, together the shareholders were simply looking for the best possible option in terms of funding or finding the right funding, which not only gets us through this crisis, but also put us in the best possible position to be competitive in the future.”

The hope is that none of this will derail McLaren’s long-term goal of returning to the front in F1. It would be naive to believe that there has been no impact on its recovery plans, but Seidl believes his team is still in a good position because of the wider changes to F1 made as a result of the COVID-19 crisis.

McLaren had lobbied for F1’s cost cap to be pushed as low as $100m for its introduction in 2021, but it regards the reduction from the planned $175m to $145m as positive for the team.

The cost cap will drop by a further $5m in each of the following two years to $135m, which combined with the expected improvements to the distribution of the F1’s revenue that’s shared by the teams should put all 10 teams on a more stable financial footing.

“It is clear the new numbers of the cost cap, which we were pushing for because it puts us in a great position looking ahead [of] being in a position to being financially sustainable and competitive,” said Seidl.

“It means we need to significantly reduce our budget, and with salaries being such a big part of our budget unfortunately, there’s no way around making people redundant.

“But there’s unfortunately no other option. We have to do it, we were pushing for this lower budget, because it will ensure that we survive as a team in a good position.”

24 mins ago Rallycross No Comments