“I think the rude awakening happened in qualifying,” said Aston Martin’s Otmar Szafnauer in Bahrain after the opening race of the season, “when we realised, after analysing the data, that the low-rake cars were hampered significantly more by the regulation change.”

Mercedes’ Toto Wolff was even more explicit. “It’s no secret that what the changes have… of course they’ve been done to peg us back… I think we’ve probably suffered more with the change of regulations than the cars with the higher rake.”

The Aston Martin design is closely related to that of Mercedes and follows the same low-rake aero philosophy and if the theories of Wolff and Szafnauer are correct, then it would seem that Aston Martin has taken collateral damage in a strategy to rein-in Mercedes’ dominance of Formula 1.

Who knows where the original thought process behind the 2021 regulations’ reduction in floor area and other limitations began and whether there was a competitive agenda?

But the stated objective was to reduce rear downforce by around 10% in order to contain the increase in loads on the rear tyres, which had never been designed to withstand an extra season of aero development. The postponement of the all-new regulations – and the new 18-inch tyres that goes with them – to 2022 had made this necessary.

Subsequently, Pirelli produced a stronger construction of tyre for 2021 anyhow. But the reasoning given for this was to allow the teams to run with lower minimum pressures, something they’d all been pushing for.

The way the stated objective of reducing the downforce was met was left to the teams to decide between them. The trimming of the floor was what they agreed to.

So although Szafnauer says that the likely effect of the changes to the low-rake cars was pointed out at the time they were being discussed, it was not actually a given. There were theories both ways.

So in assessing the likely effect of reducing that floor area – and of banning the vortex-generating slots which sealed the floors – would the low-rake cars lose out more through losing more total floor area? Or would the high-rake cars be hurt more because they were more reliant on the sealing to keep the flow attached with their very high rear ride heights?

As can be seen by a look at the graph showing each team’s qualifying deficit to pole, comparing last season’s global average to Bahrain for the opening round of ’21, only three teams were less competitive than they had been in 2020. The other seven were closer to pole in percentage terms.

So globally, we can say that the field in Bahrain was more tightly-packed than last year’s seasonal average. We can see that the identity of the fastest team had changed from low-rake Mercedes to high-rake Red Bull.

Crucially, we can also see that of the three teams which were less competitive than before, two of them were Mercedes and Aston Martin (previously Racing Point), the only two teams fielding low-rake cars.

Haas is the third team showing a loss of competitiveness but we can account for that by its stated strategy of doing only very limited optimisation of its car around the revised regulations, preferring to focus its resources almost entirely on 2022. 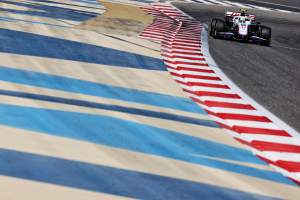 The picture represented in the graph is not in itself proof positive that the ’21 regs are the cause of the shift in favour of high-rake.

It could, after all, be simply coincidence and that Mercedes and Aston Martin have not done as good a job at adapting their cars as the others.

As Mercedes’ Andrew Shovlin, puts it: “Did this set of regulations drag back low-rake cars more than high-rake cars? It may well be the case.

“I know that they [Red Bull] won the last race [of 2020] but generally we were ahead at the end of the year and that’s not the case now.

“So either we took a bigger hit with the rules or they’ve had faster, better rates of development since they applied the regulation changes.”

But it’s strongly suggestive that the rake philosophy is the driving factor in the changed competitive hierarchy.

The specific shortfall of Mercedes to Red Bull in Bahrain qualifying – through Turns 5-6 and 9-10, both interconnected turns – strongly suggests the mechanism by which the low-rake car was losing out and is very consistent with the claims of Szafnauer that the change in regulations have lost the low-rake cars ‘around one second’ relative to the others.

There have always been pros and cons to each approach. But one of the key disadvantages of a low-rake car has always been a narrower window of speed through which its underfloor aero is working well.

Any F1 car will naturally want to understeer at low speed and overseer at high-speed. In order to retain adequate stability at high speed, a measure of understeer needs to be built into the set-up – which simply increases the low-speed understeer.

The way of compensating for that is to induce the centre of aero pressure to move forwards at low speeds. This happens naturally with a high-rake car.

The rake increases as the speed falls (because the rear is no longer being pressed down as hard as the downforce reduces with speed) which puts the front wing (and leading edge of the floor) closer to the ground and at a more aggressive angle of attack, helping to compensate for the natural low-speed understeer. Gary Anderson explains this in detail in our podcast this week:

So any track where the crucial corners have a big spread of speed between them will more heavily favour a high-rake car (hence Hungaroring and Sepang historically being difficult for Mercedes relative to other tracks).

The spread of corner speeds at Bahrain is not extreme. But what Sakhir’s Turns 5-6 and 9-10 have in common is that they are fast corners bleeding into slower ones, where the centre of pressure ideally needs to change very significantly.

It seems that the high-rake Red Bull’s balance remains much more consistent than the Mercedes’ through these two decreasing-speed interconnected sequences. This was where virtually all of Mercedes’ lap time deficit lay. Through the conventional corners where there is simply a set speed at which the car goes through, the Mercedes was every bit as fast as the Red Bull.

So it was not a deficit of downforce per se. It was a balance change through combination corners which was hurting – and that would most definitely be a limitation associated with a low-rake car.

As Shovlin summarises, “It is what it is and we’ve got a car that could win a championship if we make some clever decisions to do some good work with it and operate well over the year.

“But whether or not it’s high-rake or low-rake we can’t do anything about that now.

“What we certainly can’t do is suddenly say we’re going to lift the rear of our car 30 millimetres and work with that because that would write off the season, we’d lose so much in doing that to recover it’s just not practical.”