Formula 1 championship leader Charles Leclerc overcame a spin in the final segment of qualifying to claim pole position for the Spanish Grand Prix in Barcelona.

Leclerc looped his Ferrari F1-75 around coming out of the final chicane on his first attempt in the pole shoot-out, meaning he was left with just one chance to come good on the promise shown by his clean sweep through the three practice sessions.

Leclerc spins off at the end of his first flying lap

He's back in the pits and will get one more chance to nail a quick one #SpanishGP #F1 pic.twitter.com/1rrEWQLo4W

But it proved enough, as Leclerc fired in a 1m18.750s to secure first place by over three tenths, his laptime followed by a yelp of relief on team radio.

Verstappen, who had sat on provisional pole on the opening runs, was thwarted by an apparent DRS failure on his final attempt.

Nonetheless, he was safe on front row, with the second Ferrari of Carlos Sainz coming up a tenth short of deposing him.

George Russell led Mercedes team-mate Lewis Hamilton in Q1, Q2 and the first runs of Q3, before pressing home his advantage with his final effort that placed him fourth on the grid – with Hamilton sixth.

Russell was 0.643s off pole, Mercedes’ closest margin to first in Q3 sessions all season – albeit with Hamilton having been just a few hundredths behind that in the season opener in Bahrain.

Lando Norris was set to make it two McLarens in Q3, at the expense of Schumacher, but had his best Q2 lap deleted for a microscopic Turn 12 track limits infringement, relegating him to 11th.

Esteban Ocon led Alpine’s effort in 12th, ahead of AlphaTauri duo Yuki Tsunoda and Pierre Gasly – with the latter having, like Schumacher, sat out nearly all of FP3 and receiving a “sorry for the car, Pierre” message at the end of his qualifying from his race engineer Pierre Hamelin.

Alfa Romeo rookie Guanyu Zhou was half a second slower in Q2 than he had been in Q1, and thus had to settle for 15th. 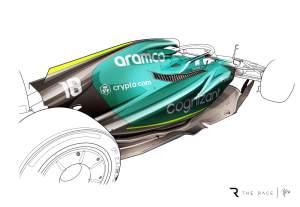 The revised Aston Martins, which have caused a stir this weekend due to their visual resemblance to the RB18’s design, were knocked out in the opening qualifying segment – with Sebastian Vettel 16th and Lance Stroll 18th. Vettel’s Q1 elimination prompted a “you must be kidding!” from the German when he was informed on team radio, while Stroll is subject to a post-session investigation over his potential unsafe release into the path of Norris in the pitlane.

Home hero Fernando Alonso slotted in between the Astons, having trailled Alpine team-mate Ocon by just under two tenths in what was his first Q1 exit since the 2021 Mexico weekend. He had started his final lap way too close to Norris’s McLaren up ahead.

The two Williams cars were cut adrift of the rest, with Alex Albon leading Nicholas Latifi by around three tenths.