The FIA has confirmed that the next-generation Formula 1 engine in 2026 will lose the MGU-H but increase electrical power output to 350kW.

F1 and its governing body have been seeking to finalise details about the next-gen engine and it was understood today’s meeting of the World Motor Sport Council was the target to get the regulations in place.

Though that has not happened the FIA has released a small number of key details about the new power unit, the rules for which have been specifically framed to try to attract the Volkswagen Group to commit to an engine programme with Porsche or Audi.

As previously reported by The Race, the 1.6-litre engines will remain but will lose the complex MGU-H component from the hybrid system.

The MGU-H, which converts wasted heat to electrical energy and is effectively a sophisticated anti-lag system for the turbocharger, is a cutting-edge piece of technology within the hybrid engines but has little-to-know road relevance.

Its loss is being replaced by increased power from the MGU-K to up the electrical power to 350kW (around 469bhp).

A power unit cost cap will also be introduced, as has been expected, although the level has not been officially set. 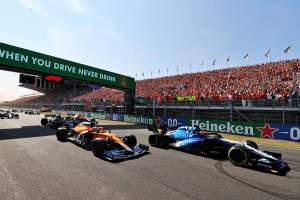 These details are part of the plan to achieve four key objectives outlined by the FIA including significant cost reduction and making it possible for newcomers to join “at a competitive level”.

That is significant because there has been a row between new and current manufacturers over whether the likes of Porsche or Audi and Red Bull’s new Powertrains division should be entitled to budget and dyno concessions to help develop their 2026 engines.

A decision from the VW Group on whether a Porsche or Audi engine project will happen – and whether it will be alongside Red Bull or as a standalone initiative – is expected this month.

The other two objectives are a “power environmental message” based on switching to “100% sustainable fuel” as well as more electrical power, and a desire to “protect the show” with a “powerful and high-revving power unit, car performance, sound, drivers’ ability to race, and avoiding excessive differentiation”.

However, it will be some time before the new power unit regulations are developed fully as a detailed document is not expected to be submitted to the WMSC until early 2022.