Red Bull team boss Christian Horner said he would “keep my mouth shut” if he were Mercedes team boss Toto Wolff, amid the row over flexing wings in Formula 1 and the threat of a protest at the Azerbaijan Grand Prix.

Mercedes and its customer team McLaren have been vocal opponents of the rear wings used by Red Bull and other teams like Ferrari, Alpine and Alfa Romeo so far this season, arguing they are flexing too much on-track and breach the rule governing the movement of aerodynamic parts.

Those teams have defended their designs by pointing out they have passed the FIA’s load tests, while Horner has previously argued that by Mercedes’ logic the world champion team’s own front wing should also be illegal, claiming footage from the Imola round showed excessive flexing there.

The matter has escalated in recent weeks with the FIA informing teams that increased load tests will be implemented from the next race in France, which Red Bull and others have admitted will necessitate a change to their designs.

In addition to the off-track load tests, the FIA has placed stickers on the rear wings of every car in Baku to help the governing body monitor the movement of each rear wing and judge compliance on-track.

As Baku has a unique layout with the longest flat-out section on the calendar and a tight, twisty design for the rest of the circuit, a rear wing that flexes more will offer greater benefit here – hence the implied threat of a protest from Mercedes and McLaren, who are unhappy that the likes of Red Bull have been given more time to change their designs.

Horner told Sky Sports F1 after Friday practice in Baku that “if I was Toto with the front wing he’s got on his car, I’d keep my mouth shut”. 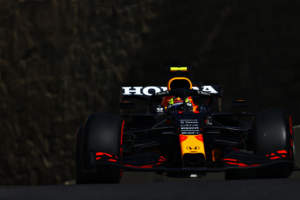 Baku FP2: Everything you need to know
Read more

“A lot of noise has been made about the rear wing, a lot of revisions had to be made,” said Horner.

“If you’re picking on one end of the car, you have to look at the other.

“You can’t look at one part in isolation and say ‘that set of rules only applies to that element on that car’, you have to look at all areas.

“Sometimes, you have to be careful what you wish for.”

Asked to specify his complaints while shown footage of the flexing Mercedes front wing, Horner said: “I’m not sure I have to say too much.

“You can see the sponsorship [logo] on the front wing then it disappears as he comes into a braking area.

“Maybe that’s what it’s for, it’s to expose the new sponsor on the front wing.”

Horner’s previous arguments have been echoed by the likes of Alfa Romeo chief Frederic Vasseur and Alpine executive director Marcin Budkowski, who believe the load tests are sufficient proof the designs are legal.

Budkowski said in Baku on Friday that he would be “very, very surprised” if a protest materialised and stressed that the load tests need to be the limit set by the FIA because every aero part will flex on track when subject to such high forces.

Horner said that a comparison of the Mercedes and Red Bull rear wings in Baku suggested the Mercedes design was flexing even more than Red Bull’s.

Horner added: “There’s obviously been a lot of noise that Mercedes have been driving about the rear wings, and the bottom line is that if the car complies with the rules, it passes the tests, it’s legal.”

“The FIA come up with the tests. That [the Mercedes] if anything, around here looks maybe a bit worse than ours.

“I’d be more interested to see the front of the cars, than the rear of the cars.

“You’re opening a complete can of worms. That’s why there are tests and there are stringent tests, that the cars are designed to comply with.”