The Italian Grand Prix may have been the first Formula 1 victory for the AlphaTauri identity, but a shock Monza win for that team has a famous precedent.

Monza has been the stage for many legendary victories, but the most unlikely of all was when what was the Minardi team, then in its Red Bull-owned Toro Rosso guide, became the only Ferrari customer team ever to win a grand prix with Sebastian Vettel in 2008.

Vettel’s win was one of the most unexpected in world championship history and stands among the greatest F1 wet-weather victories. For while Toro Rosso and Vettel had emerged as a consistent points-scoring combination in the second half of the 2008 season, a best finish of fifth prior to Monza gave no indication a victory on merit was possible.

It was an emotional day. While the Toro Rosso team was no longer quite the minnow Minardi had been, there were plenty of staff still there from that era. After all, this was less than three years on from Red Bull saving the team by acquiring it to become its B-team.

After the race, I remember hanging around the back of the Toro Rosso in the hope of grabbing some comments from team principal Franz Tost and technical director Giorgio Ascanelli and the emotion that had consumed the team was very obvious.

Those personnel still there from the old days undoubtedly felt it was a victory for Minardi and the celebrations were exuberant, a big cheer rising every time a new team member emerged from the garage, occasionally accompanied with water being flung over them! Fernando Alonso also saw it as a win for his old team as he paid a visit to offer his congratulations. 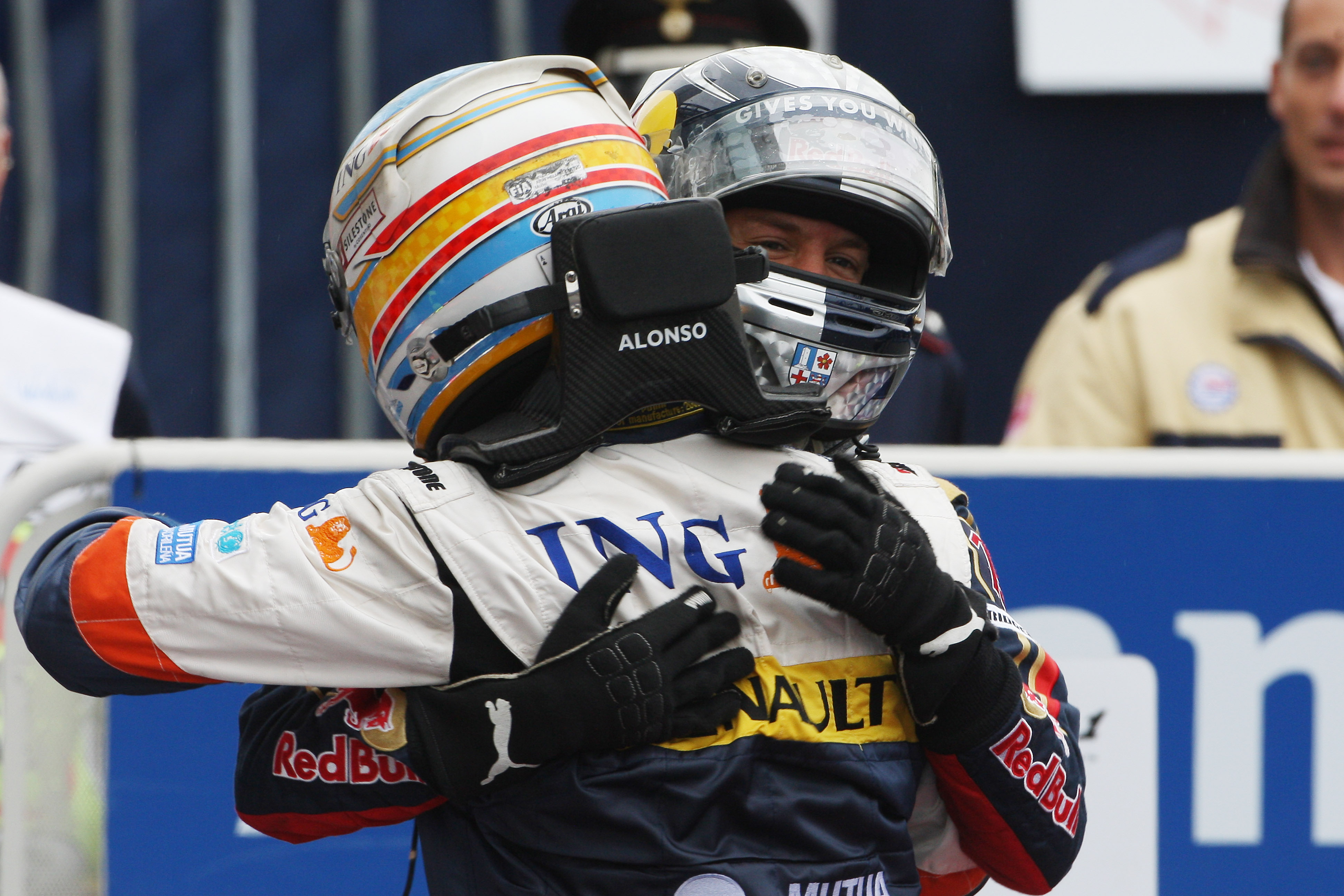 While the Toro Rosso’s relatively low drag and the power of the Ferrari engine – a key advantage over the largely identical car used by Red Bull but with Renault propulsion – and tweaks made to the suspension and brakes compared to the parent team meant the package was well-suited to Monza, Friday didn’t go well and Vettel struggled for grip. But having been 10th in the first two free practice sessions, following overnight changes Vettel was second-fastest in FP3 and went on to take pole position in the wet by 0.076s.

“We had already had some wet practice on Friday and I didn’t feel very comfortable,” said Vettel after becoming the youngest driver to take pole position. “Overnight we did some changes, we did not know what to expect, how much rain there could be, we found just the right thing.

“After free practice today I was very happy with the car in the wet, with a very good balance. When you feel confident in these conditions then it is a huge advantage. That is the key – if you don’t know how your car is, you are not even trying.”

McLaren driver Heikki Kovalainen was Vettel’s closest challenger, team-mate Lewis Hamilton eliminated in Q2 in 15th place after a baffling gamble on intermediate tyres in wet conditions. With Mark Webber third for Red Bull ahead of the second Toro Rosso of Sebastien Bourdais, the stage was set.

Wet conditions on race day meant a safety-car start. After two laps rolling around behind Bernd Maylander’s Mercedes, Vettel was released without the stress of a start off the grid, ensuring there were no first-timer nerves off the line. But by now, team-mate Bourdais was already a lap down after stalling on the dummy grid. 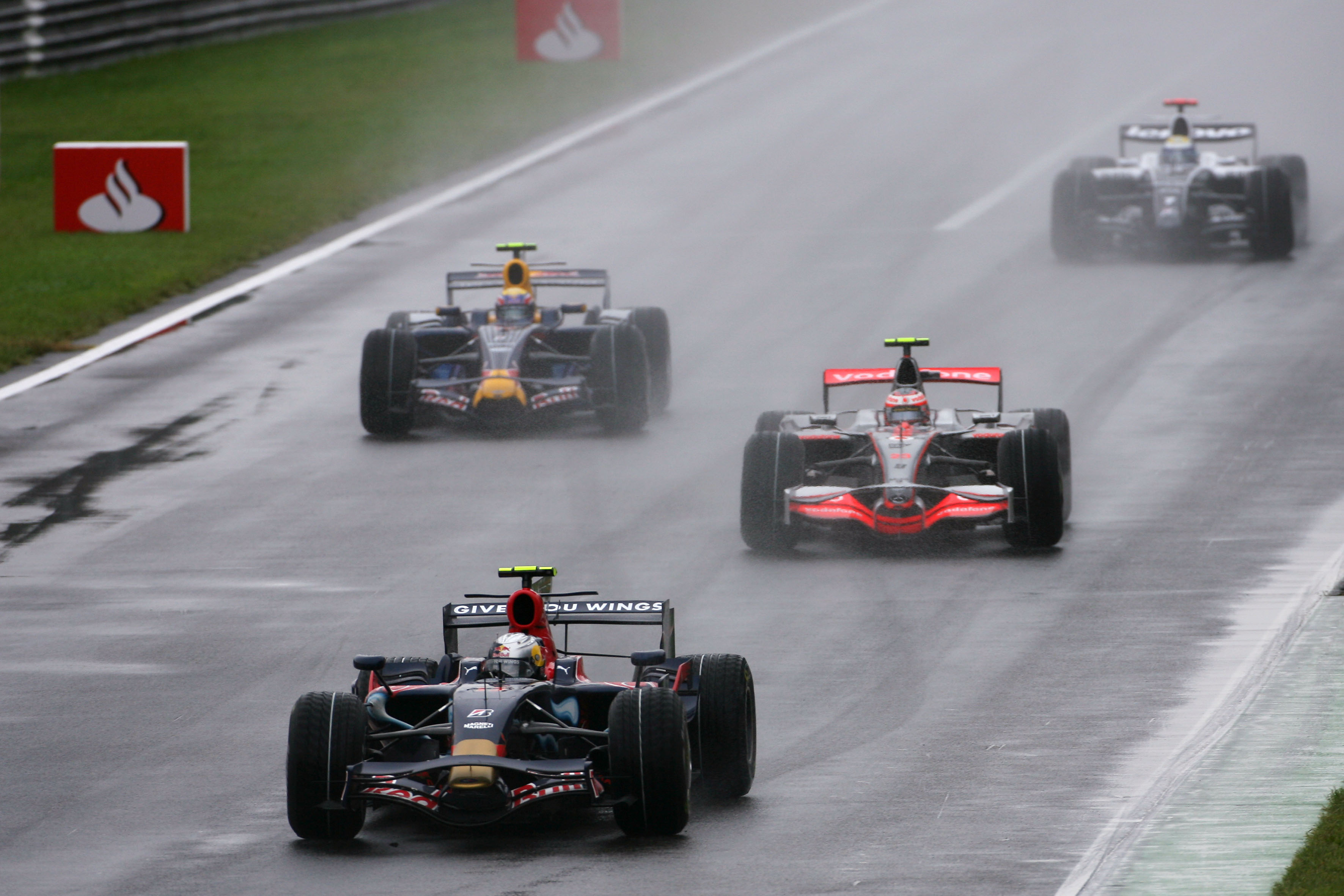 Vettel crossed the line at the end of the safety car period six-tenths clear of Kovalainen. This grew on the subsequent laps to two seconds, then 3.7s and 5.2s as Vettel asserted his authority. Interviewed a few years later about this race, Kovalainen admitted he went into the race expecting to win but was surprised by Vettel’s pace and the challenge prevented by the thick spray early in the race.

Aside from a brief off at the second chicane early on, Vettel drove beautifully. But the key to closing out the victory was the weather and his real competition was Hamilton, despite the McLaren driver spending the first 10 laps stuck behind Kimi Raikkonen’s Ferrari.

As Vettel had his fellow two-stoppers covered, Hamilton posed the real threat as a fast driver making only one stop.

Vettel came in after 18 laps to take on fuel and a fresh set of extreme wets, cycling back into the lead three laps later when Kovalainen made his first stop. Incidentally, the fuel offset that allowed Kovalainen to run longer covered the qualifying deficit and was integral to Vettel’s pole position.

Hamilton made what was scheduled to be his only stop on lap 27, pulling in from right behind Vettel and taking another set of extreme wets safe in the knowledge that Meteo France had emphatically forecast that the rain was to return.

Had the rain come, Hamilton was well-placed to close up on Vettel and possibly be within range to take the lead when the Toro Rosso driver made his second stop – although it should be noted he would have found overtaking him on track should that have been necessary difficult given the Toro Rosso was running dry wing levels and therefore seriously fast on the straights. 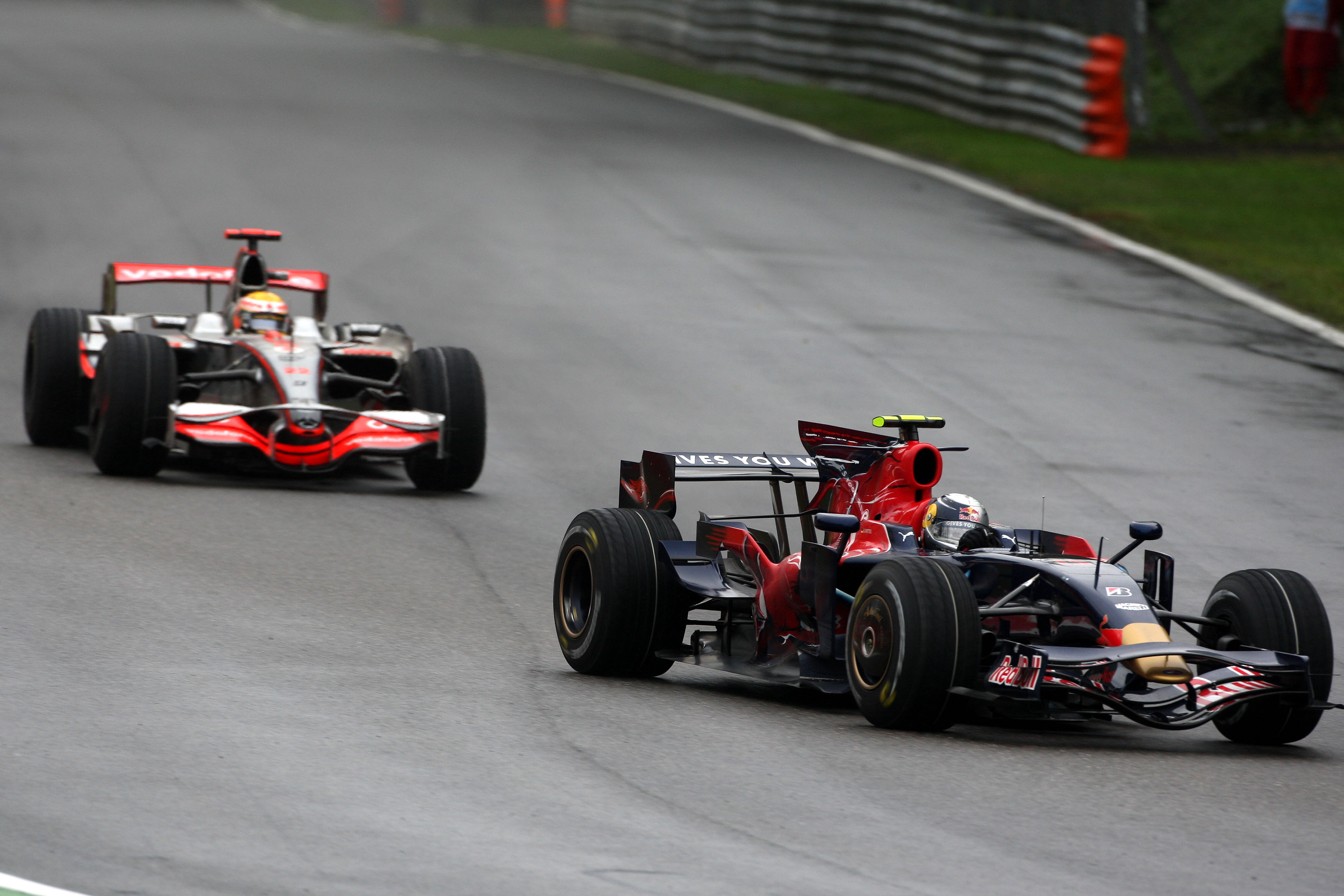 But the rain never returned, the track conditions continued to improve and the regular wet tyre (effectively an intermediate despite the nomenclature) was the order of the day.

Vettel made his second stop on lap 36 to take the inters. Inevitably, McLaren had to abandon the one-stopper and Hamilton came in on the same lap for his own set of intermediates.

The 2008 Italian Grand Prix remains Vettel’s only Monza win with Ferrari power, although he did win there twice more for Red Bull

While Hamilton went on to finish seventh, Vettel crossed the line 12.512s clear of Kovalainen, with BMW Sauber’s Robert Kubica – who benefitted from several one-stoppers having to pit again for intermediates – taking the final podium position.

The celebrations after the race were as enthusiastic and widespread as you will ever see after a grand prix. Vettel, the young talent breaking through with one of the great surprise victories and the old Minardi team, which had never finished higher than fourth, taking the trophy for the winning constructor. 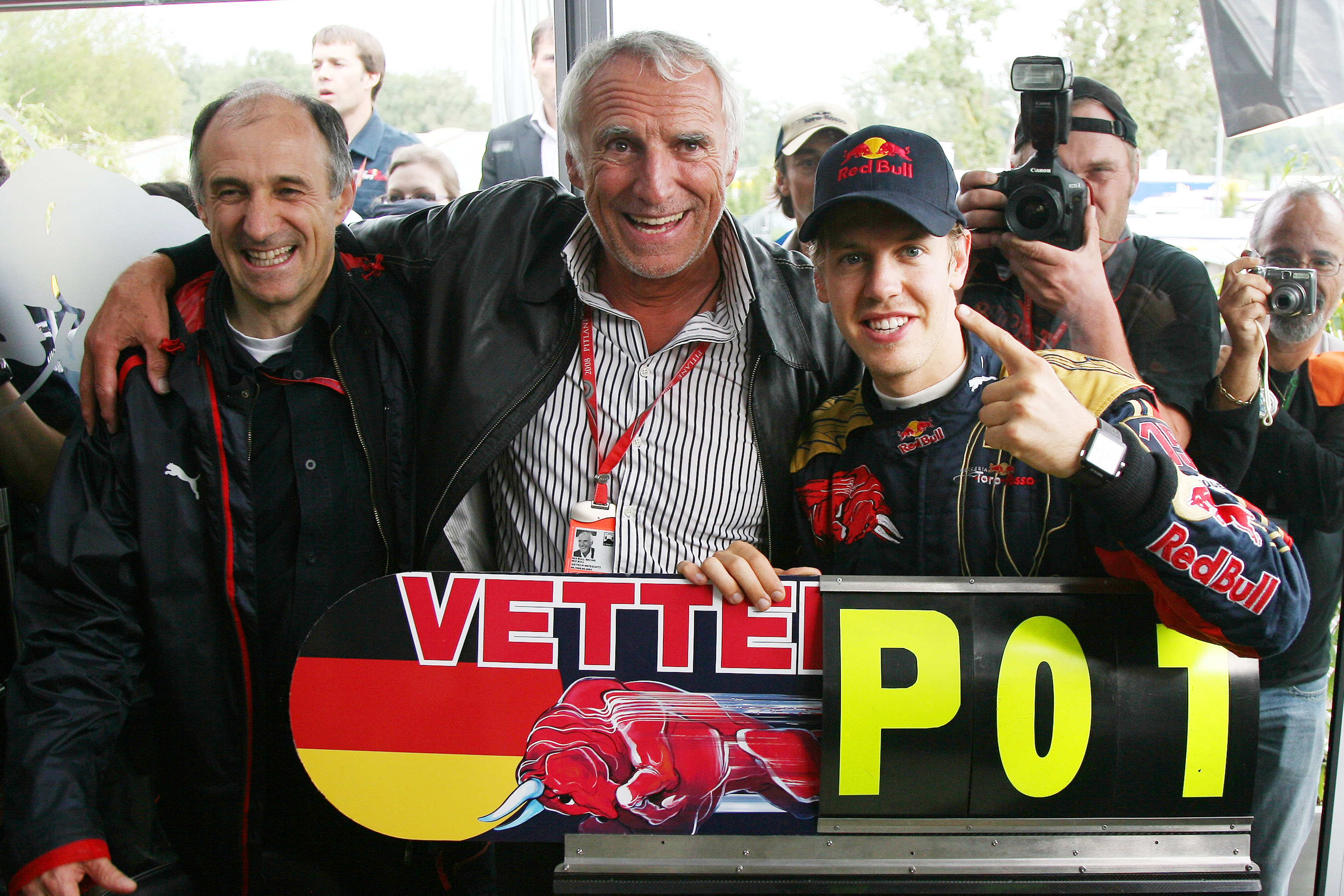 After the race, Vettel singled out Ascanelli for his contribution to the win. The Italian, once race engineer for Ayrton Senna, is often overlooked but it’s worth revisiting Vettel’s comment in the post-race press conference.

“Special thanks to Giorgio Ascanelli, I think I have to mention him,” said Vettel. “What he has done with that crew is unbelievable: everybody is now extremely motivated and just great to give back a result like that. Obviously, a race win is the best you can give to your team, so I’m proud and very happy.”

This remains Vettel’s only Monza win with Ferrari power, although he did win there twice more for Red Bull. The more subdued, world-weary Vettel that will contest the Italian Grand Prix today couldn’t be more of a contrast from the delighted, breakout star of that day at Monza in 2008.