Ferrari’s development of a low-downforce aerodynamic package was key to Charles Leclerc’s unexpected podium finish in the British Grand Prix, but has left Sebastian Vettel’s confidence “quite low”.

Leclerc earned Ferrari’s best qualifying position of the season with fourth at Silverstone and was set to finish there as well before benefitting from Valtteri Bottas’s late tyre failure to steal third.

It was his and the team’s second podium of the season after a fortunate second place in the season opener, but this result was more merited given Leclerc’s performance throughout qualifying and the race.

Ferrari had been expected to suffer a difficult Silverstone event for fears its down-on-power engine would be exposed on the power-sensitive circuit, where the National and Hangar Straights are now joined by a long flat-out run from Luffield to Becketts, and its car would not have the cornering performance to compensate.

After a mixed Friday with “quite a radical approach” to its downforce level, Leclerc looked more in the mix but was hopelessly adrift on long runs – so Ferrari was still being cautious.

But whether it was climatic conditions moving in the team’s favour, perfectly judging the set-up changes from Friday to Saturday, or the circumstances in the race itself, Leclerc surprisingly had a routine grand prix after a brilliant qualifying lap put him on the second row of the grid.

“I’m very happy with it, especially with the tyre management,” said Leclerc. “It was easy.

“We had a very aggressive downforce level coming here, so we had quite a lot of speed in the straights but very difficult around the corners.

“We were quite worried for the race pace, especially for the tyre degradation – but we managed to do quite a good job on that.”

Ferrari reckoned the low-downforce package was worth a couple of tenths at Silverstone and this proved crucial for the whole weekend. It allowed Leclerc to get through Q2 using only the medium tyres, setting him up for the race.

And it helped Leclerc finish clear of the midfield cars in Q3 and rival Max Verstappen’s Red Bull for third on the grid.

He had to lift through Copse in qualifying when the others – even Williams, which had the slowest car of 2019 – were flat out, and the car was moving around a lot, but Leclerc was aggressive on turn-in to hustle it to the apex, then maintain an ultra-impressive minimum speed through the corners (especially in the first sector) that was aided by maintaining a small amount of throttle while other frontunners were off it completely. 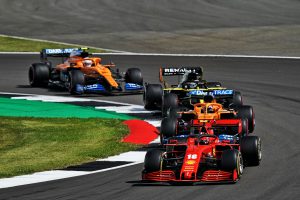 We can say that with confidence because Leclerc was able to live with the Silverstone package and use it very effectively, whereas Vettel was where Ferrari would have probably been without it, if not a bit worse, and as a result had a miserable race starting on softs and showing no real pace thereafter.

The reward for Leclerc’s greater pace, though, was vital track position that he was able to maintain in moments of vulnerability – he was struggling “massively” to get temperature into the tyres after the two safety car restarts – and bolster when Romain Grosjean’s long-running Haas turned into a bit of a rolling road block.

“Once the tyres were in temperature it wasn’t actually that tricky,” Leclerc said. “I expected worse.

“We’ve done quite a good job, I think, with the set-up of the car and with the balance of the car. That was very nice to drive today.

“I think we were pretty lucky having the Haas in between the McLaren and myself. Whether I would have been able to keep them behind or not, I don’t know but it would have definitely been quite a lot more difficult.”

It wasn’t, though, and Ferrari will take great heart from the performance of one side of the garage. Even if it was still flattered by one Red Bull being out of the picture and Racing Point underachieving once again.

Team boss Mattia Binotto was full of praise for Leclerc for “patiently listening to the engineers, saving the tyres for the entire race” and the team for the work at Maranello that went into preparing its Silverstone set-up.

The concern for Vettel’s side of the garage must not be ignored, though.

“We cannot be happy with the problems we had on Friday, which are reliability problems and installation problems which simply did not help the situation of Sebastian,” Binotto admitted.

Though the lost track time because of an intercooler problem in FP1 and pedal assembly issues in FP2 and FP3 can only really account for part of Vettel’s struggles.

In the race he started 10th and on softs, which was a disadvantage – but the early switch from everybody (except Grosjean) to hard tyres neutralised the different strategies.

Vettel should have been able to progress from there, but actually ran outside of the points for most of a miserable grand prix in which he was mugged by Pierre Gasly’s AlphaTauri, and looked set for a 12th-place finish after the recovering Red Bull of Alex Albon passed him late on.

He was even told he was P12 after the race before his engineer corrected himself, just part of a telling ‘exchange’ in which Vettel remained completely silent even after Binotto had come over the radio to sympathise with his struggles. Vettel only spoke when he was almost into the pitlane entry and was asked for a radio check.

“Yeah it was a very tough race,” he said immediately. “I had very little confidence in the car. Similar to quali. Struggling lap to lap, trying a lot of things but nothing really was a breakthrough.

Tyre failures for Bottas and Carlos Sainz Jr promoted Vettel to 10th, but if ever the four-time world champion has scored an unsatisfying point it is this one.

“I couldn’t challenge anyone,” he said. “Many of those behind me were a bit faster and managed to get past, as I was struggling massively to find grip in this car, even though I tried lots of different things this weekend.

“I didn’t have the required pace and so my confidence level is quite low at the moment, because I’m struggling to get a feel for the car and every time I try and push, I lose the car.

“We need to have a look at this problem together with the engineers.”

The inquest will be well under way with a view to either finding a clear problem, or trialling solutions to make Vettel more comfortable.

It’s not the first time he has felt unhappy in the SF1000 this season, having endured a chastening season opener in Austria, and a low-downforce set-up was never likely to play to Vettel’s strengths.

So unless Ferrari finds an obvious problem with Vettel’s car, a Silverstone repeat this weekend bodes poorly for its outgoing driver.

Vettel’s departure from Ferrari at the end of this season is coming because he is seen as surplus to requirements at Maranello. Races like the British GP will only reinforce that view, especially when they make Leclerc look so good.