Mercedes’ Formula 1 engine progress has been labelled a “surprise” by Honda, which Red Bull driver Max Verstappen says has been out-developed despite “big steps” of its own.

Honda and Mercedes were the only two engine manufacturers to upgrade their specifications between the aborted Australian Grand Prix and the opening round of the 2020 F1 season in Austria last weekend.

However, Mercedes said its engine focus was only on reliability, whereas Honda also chased performance.

Mercedes enjoyed an advantage of half a second in qualifying for the first Red Bull Ring race, although a significant part of that appeared to be Red Bull’s car having a small balance issue that then had a bigger knock-on effect in terms of Verstappen’s pace. 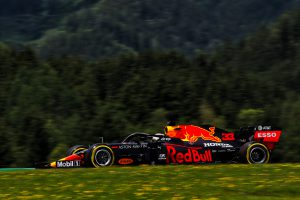 But after the first performance-dependent session of the season, the Red Bull star and his team’s engine partner have both admitted that Mercedes has strengthened its engine significantly since last year.

Honda F1 managing director Masashi Yamamoto said: “In practice we were seeing what we expected from the dyno, especially on the long runs as well.

Asked by The Race how pleased he was with Honda’s steps, having changed specification since testing, Verstappen said: “I think we made big steps but clearly Mercedes made bigger steps than us.

“We have to keep pushing.

“There’s still performance again but not only from the engine also from the car, so we just have to push on both sides to become better.

“But clearly Mercedes has done a really good job over the winter.”

Red Bull’s car looked on-edge during testing back in February but this was played down at the time by the team.

Verstappen and team-mate Alex Albon then had more dramas in practice in Austria last week.

It has been suggested that Red Bull’s issue is caused by aerodynamic parts losing rigidity and causing a minor stall, which means the drivers lacked confidence and still had a straightline speed penalty that was part-drag but also part-engine when the teams switched to full qualifying mode.

“If you look at the data, there are not many corners where we are slower,” said Verstappen.

“I think most of them were faster, but I wasn’t really happy with the balance throughout the whole corner so from entry to mid-corner and around here you’ve got a bit of confidence to push in high-speed corners.

“We just need to figure out how we can make it a little bit more balanced and then I’m sure we can be closer.

“I don’t say we will beat them in qualifying but if we can be within like two or three-tenths of qualifying, then it’s definitely game on in the race.”

There is no allowance for in-season engine development, unless for reliability reasons, as part of F1’s bid to save costs.

Engine manufacturers will instead be able to re-homologate their engines for 2021, and they will be afford one upgrade that season and in 2022, then no upgrades in 2023 and 2024.

“We will work on reliability if we think we need to, but because we cannot do anything about performance we are now focusing our development onto the 2021 power unit, which will be the same as everybody else,” said Yamamoto.

“That’s the attitude we will take from now on.

“After finishing the first round we saw some issues of course, especially our performance in qualifying which is something we have to try and improve somehow within the regulations.

“But we were able to see a good performance in the race and we think we can compete against Mercedes, so we just want to continue constantly competing against them this season, that’s our target.”