High-rake is giving Red Bull a key advantage over Mercedes

Red Bull showed a decisive qualifying pace advantage over Mercedes at a hot Paul Ricard to take only its second pole position of the 2021 Formula 1 season, and it’s in part thanks to its high-rake concept.

Red Bull’s Max Verstappen dominated French Grand Prix qualifying with a spoon profile rear wing, bigger than that used in Baku, but smaller than the conventional wing on the low-rake Mercedes. Around the particular demands of this track where the soft tyres were overheating by the end of the lap, this downforce level appeared to let Red Bull have its aero cake and to eat it – giving it straight-line speed comparable to the Mercedes but still greater corner speeds in the final sector. 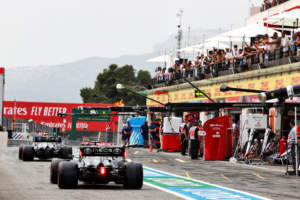 “We’ve taken a bit of the downforce out of the car,” confirmed Christian Horner confirmed to SkySportsF1.

“You can see from the size of the rear wing for us and Mercedes. We’re using less energy in sector two, so we’re going faster down the straights because we’ve got less resistance there, we’re still managing to do a good time in sector three, so that’s helping us to generate a competitive lap time around here.”

Toto Wolff said it was a choice that would not have worked for Mercedes: “Our simulation showed if we’d put on our lower downforce wing it would have been slower. We would be losing in the corners much more [than Red Bull].”

Possibly the defining advantage of a high-rake car is that it derives a greater proportion of its total downforce from the underbody, with its more aggressive angle of attack creating more negative pressure. The downside is that given an equivalent wing, the high-rake car will tend to carry more upper body drag as the rear of the car sits higher.

However, when you come to a circuit where the ideal wing level straddles two choices and the high-rake car will retain more of its downforce with the smaller wing which can be used to counter the extra drag of the upper body inherent to a high-rake car.

This all sets up a fascinating prospect into the race where the tyre challenge is the newly-mandated high minimum pressures, which is expected to be controlling blistering. The circuit is tough on tyres, and as we’ve seen so many times this season, dominating on Saturday doesn’t guarantee success on Sunday.