Is Gasly now one of F1's elite drivers? Our verdict - The Race
Skip to content
Formula 1

Is Gasly now one of F1’s elite drivers? Our verdict

Pierre Gasly’s French Grand Prix qualifying performance continues a rich vein of form that has led his AlphaTauri team boss Franz Tost to declare he “belongs among the best drivers in Formula 1”.

Gasly will start his home race sixth on the grid having arrived at Paul Ricard fresh from a podium finish in the Azerbaijan Grand Prix, where he defeated Ferrari’s Charles Leclerc in a thrilling two-lap fight after the final restart.

That was Gasly’s third podium since losing his Red Bull drive in mid-2019 and follows his shock, stunning victory in last year’s Italian Grand Prix.

“He is continuously learning and he is so far doing a really good job,” said Tost.

“He has shown fantastic qualifying [performance] and also very good races and one of the highlights was of course the last two laps in Baku, where he could keep Leclerc behind him although he had some technical problems.

“This shows that Pierre has achieved another level and for me, he now belongs among the best drivers in Formula 1.”

Here are our writers’ verdicts on whether Tost is right to rate Gasly so highly – and what that means in the context of his Red Bull future.

Gasly is one of F1’s ‘clutch’ drivers

Gasly has now scored three podium finishes since losing his Red Bull drive, all three earned by mastering the peaks of his team’s slightly randomly performing cars and grasping the opportunities that unusual races have created.

It is not chance that has put Gasly on the podium more than times than any non-Mercedes, Red Bull or Ferrari driver over the past three seasons. It is quality. Each individual occurrence has an element of luck involved. To get lucky three times means there’s something more at the heart of it.

To borrow a phrase from US sport, Gasly is now an undisputed ‘clutch’ driver. He thrives in critical situations. AlphaTauri brings out the absolute best in him and when there’s something big on the line, Gasly gets it done.

The question is whether this is just Gasly thriving in a special environment that loves him, or if he’s learned from his Red Bull problems and could replicate this in a top seat. Because if Gasly is as good as Tost says – and the evidence of the last 18 months is overwhelmingly in his favour – he deserves that chance again.

AlphaTauri/Toro Rosso has always been an inconsistent team, but Pierre Gasly has been a godsend for it. Since his brief career upgrade with the mothership Red Bull, which didn’t work out, he has really been a stabling influence to AlphaTauri.

Red Bull is a one-driver team that lives and dies for Max Verstappen – and rightly so.

But Red Bull needs to widen its vision and realise that drivers are different and the way they achieve their optimum performance is different. 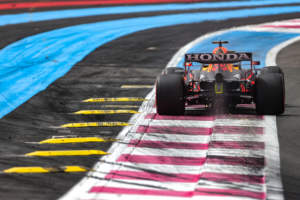 Verstappen has always been able to white-knuckle his cars but Gasly needs confidence. At AlphaTauri he has that and he has a team that believes in him.

Week in, week out he has put in 100% and when the occasion arrives – like last year at Monza – he is there to reap the reward. He’s also got a couple of other podium finishes, which is basically all you can do for that team and for the team it’s all that can be expected.

Is he capable of taking on what are now the top-line drivers? Yes, in the correct environment without doubt. Is he a bit fragile? Possibly, but an arm around the shoulder and a team that believes in him will give him the confidence in a way that Red Bull, as a team, simply doesn’t know how to do.

It’s very difficult to know where he could go, and he might just be better staying where he is. Gasly has everything at AlphaTauri that a driver could want. No, it’s not a ‘works’ team but he can get satisfaction from getting one over the big boys and if a real opportunity arrives he should have the confidence that he will be on plenty of shortlists.

This is an impossible debate

The idea of ranking drivers is intrinsically flawed but we love doing it anyway.

The fact that the machinery muddies the water just makes it all the more intriguing but the reality is it’s a complex, sophisticated sport with a near-infinite array of imponderables and who is doing the best job is not even a quantifiable question because the circumstances of each mean their tasks are not the same.

Would Gasly be able now to go up against Verstappen as a team-mate and be at a similar level? Or would he look just as he did last time in that situation?

Is the AlphaTauri a genuinely good car and would any of, say, the top 10 drivers deliver a similarly strong showing in it?

Gasly is at a high level for sure. But how difficult is his task relative to the others who might be among the elite? How would he show in the same car as Lando Norris? Or Carlos Sainz? Or Valtteri Bottas?

Gasly’s not among the elite yet

Gasly has performed strongly since he was busted back to what’s now called AlphaTauri in the middle of 2019 and continues to get better.

He’s a driver who knows his game well, has a great relationship with the team and has delivered consistently well over the past couple of years.

Having said that, good as he is, he’s not yet in that elite bracket. That’s a very small group of drivers, the ones who you would bank on to have a run at the world championship in a car capable of doing so. And it’s no disgrace not to be regarded as being at the level of Lewis Hamilton and Verstappen as precious few are.

Currently, Gasly is a driver who you would regard as an excellent leader for a good midfield team or consider as a strong second driver for a top team.

But while he’s shown admirable determination in revitalising his career after the blow of being dropped by Red Bull, he’s yet to convince that he’s the most adaptable driver on the grid.

He’s stunning in a car that allows him to attack the corner and offers a strong front end and predictable rear, but even in the past couple of seasons, there have been times when he’s struggled far more when the front axle is limited.

But what’s beyond question is that he’s a driver who is capable of executing both qualifying laps and races consistently well and certainly one of the better drivers on the grid even if he’s not one of the few very best.

What’s more, he’s got admirable fighting spirit and verdicts like that are just the kind of thing that spur him on, which means there will be even more to come.

He needs to prove he can handle a top team

There is no doubt that Gasly is in the form of his life right now and is one of the standout drivers of the season, but I wouldn’t rank him among F1’s elite yet.

Gasly is clearly a great driver, he wouldn’t be a race winner otherwise, but he’s doing it in a team where he is fully comfortable and has very little pressure.

His stint at Red Bull still raises question marks, and while it can be argued that his struggles there were more to do with Red Bull than him, to really be classed as one of F1’s elite he needs to prove his mettle at a frontrunning team while dealing with the pressure that comes from fighting for titles.

If he can do that and continue to thrive, then that will be the moment his reputation moves to the next level.

There’s top, and then there’s elite. In Lewis Hamilton, Max Verstappen and probably also Charles Leclerc, F1 has one of the finest top tier driver groups it’s ever seen.

Gasly’s not at that level. But the current ‘tier 1.5’ that he’s in is very, very good too. They just have more lapses than that top-top group (like Gasly rather wasting the first two grands prix of 2021 in a very competitive car), are less adaptable and more likely to make mistakes.

They’re still as good as a few drivers who’ve won world championships in the last three decades. But they’re probably at their best achieving over-and-above for pretty good teams, and would be found slightly wanting if they went up against one of those true greats in a title fight for a top squad with all the weight of expectation involved. That feels like a fair summary of Gasly’s place in F1.

He will be a world champion one day

Pierre Gasly is a confidence driver. When he has a team behind that’s willing to tweak and develop the car to his needs, he thrives. It’s a big part of his reasoning of why he’s driving better than ever right now.

So it’s a case of Gasly finding a team or project that can be built around him and can give him the platform to truly shine – and it’s unlikely he’s going to find that in a front-running F1 team, certainly not at Red Bull.

This leads to me explain my slightly attention-grabbing headline, and that’s Gasly can be a world champion outside of F1. I’m sure he’s got plenty of years ahead of him in the championship and whose to say he won’t follow the likes of Sergio Perez in getting a second chance in a top team?

However, when he does decide (or is forced) to depart, his phone is not going to stop ringing. Whether it be a return to Formula E following his excellent cameo four years ago or racing at the 24 Hours of Le Mans, Gasly will be successful with the right backing and faith placed in him.

For me, he’s not in F1’s elite tier, but there’s no reason one of the strongest midfield performers of the last two years can’t go on to have plenty of success outside of it in the future.