Mercedes’ bid for Verstappen review to be heard on Thursday

Mercedes has been summoned to the stewards at 5pm on Thursday at the Qatar Grand Prix to present its case for the Lewis Hamilton/Max Verstappen incident in Brazil to be reviewed.

Hamilton tried to pass Verstappen on the outside of Turn 4 but Verstappen braked later, ran wide and both cars had to take to the run-off area. 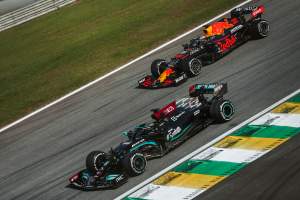 The incident was noted by the stewards but not investigated.

Although Hamilton successfully passed Verstappen at the same corner a few laps later and went on to win, Mercedes has opted to activate its right to request a review.

Verstappen finished second and had he been awarded the usual five-second time penalty afforded drivers who are deemed to have forced another driver off-track, he’d have dropped to third behind the second Mercedes of Valtteri Bottas.

Verstappen leads Hamilton by 14 points in the drivers’ championship while Mercedes has an 11-point lead in the constructors’.

If the review is granted and the stewards subsequently decide to give Verstappen a five-second penalty, it would cut his lead to 11 points and extend Mercedes’ advantage to 17.

The hearing has been set for 5pm in Qatar on Thursday via video conference and is to determine whether the right of review exists in this case – which means whether “a significant and relevant new element is discovered which was unavailable to the parties seeking the review at the time of the decision concerned”.

After the race the FIA admitted that Verstappen’s forward-facing onboard camera was not available at the time of the initial check of the incident and they made the decision not to investigate without that evidence.

Red Bull has also been summoned to the meeting with the stewards.

Verstappen/Hamilton incident
Thank you for your feedback!