Lewis Hamilton’s Styrian Grand Prix pole position lap was an exhibitionist performance from the Formula 1 world champion described by his Mercedes team boss Toto Wolff as something not of this world.

Hamilton traded fastest laps with Max Verstappen for much of a Red Bull Ring qualifying session held in conditions that started off tough and became atrocious.

The two drivers, who have virtuoso wet-weather performances on their CVs already, consistently seemed a class apart – although others threatened to get in the mix in the top-10 shootout as the rain intensified.

“He was balancing the car on the edge, aquaplaning, the throttle control was incredible” :: Toto Wolff

In the end, though, Hamilton was on pole by 1.2 seconds. His team-mate Valtteri Bottas, apparently thwarted by a glazed brake, was 1.5s slower in fourth.

“You know, very rarely you see performances that are just not from this world,” said Wolff.

“When you look at the onboard on his lap, I mean he was balancing the car on the edge, aquaplaning, the throttle control was incredible.

“And I can’t remember that we have seen 1.2 seconds between first and second.” 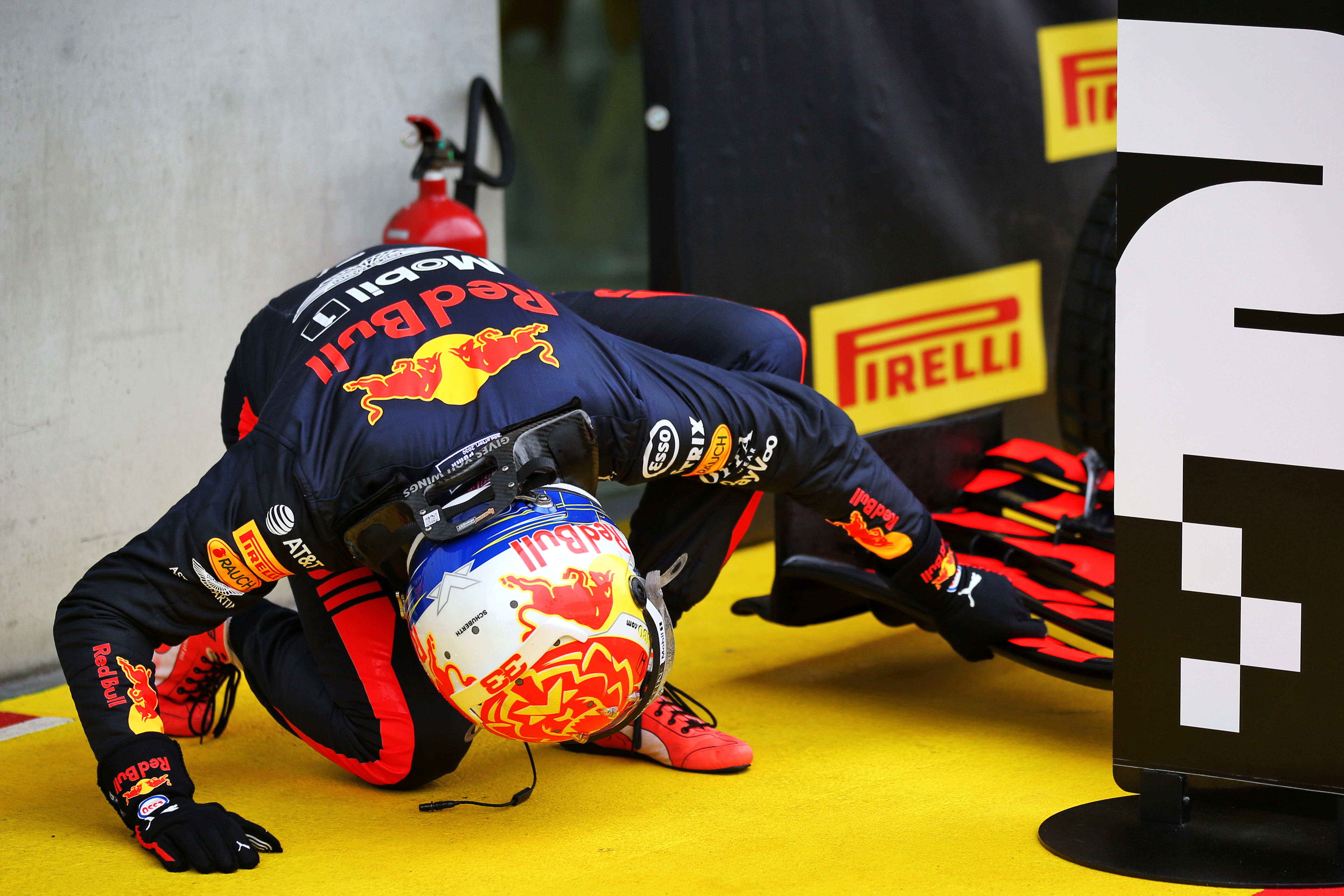 Verstappen’s half-spin at the penultimate corner flattered Hamilton somewhat, but it shouldn’t detract from the quality of the final 1m19.273s of Hamilton’s qualifying – half a second quicker than his second-best lap, which was already fastest by 0.7s.

Hamilton said it was “as close to perfect as I could really get it in those conditions” and was particularly chuffed to set it as the rain continued to pelt down. 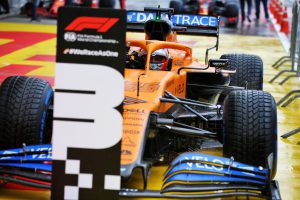 He compared it to his famous 2008 British Grand Prix victory at a sodden Silverstone, when he lapped everybody except the other drivers on the podium.

“Honestly it was a fantastic lap, the last one,” said Hamilton.

“The importance of managing your time out there, managing your battery pack, knowing when to use the few laps that you have on the qualifying modes, creating the gap, not making a mistake when it counts…

“It definitely takes me back to times like Silverstone 2008, because you’re really at one with a car and you’re not fazed at all. 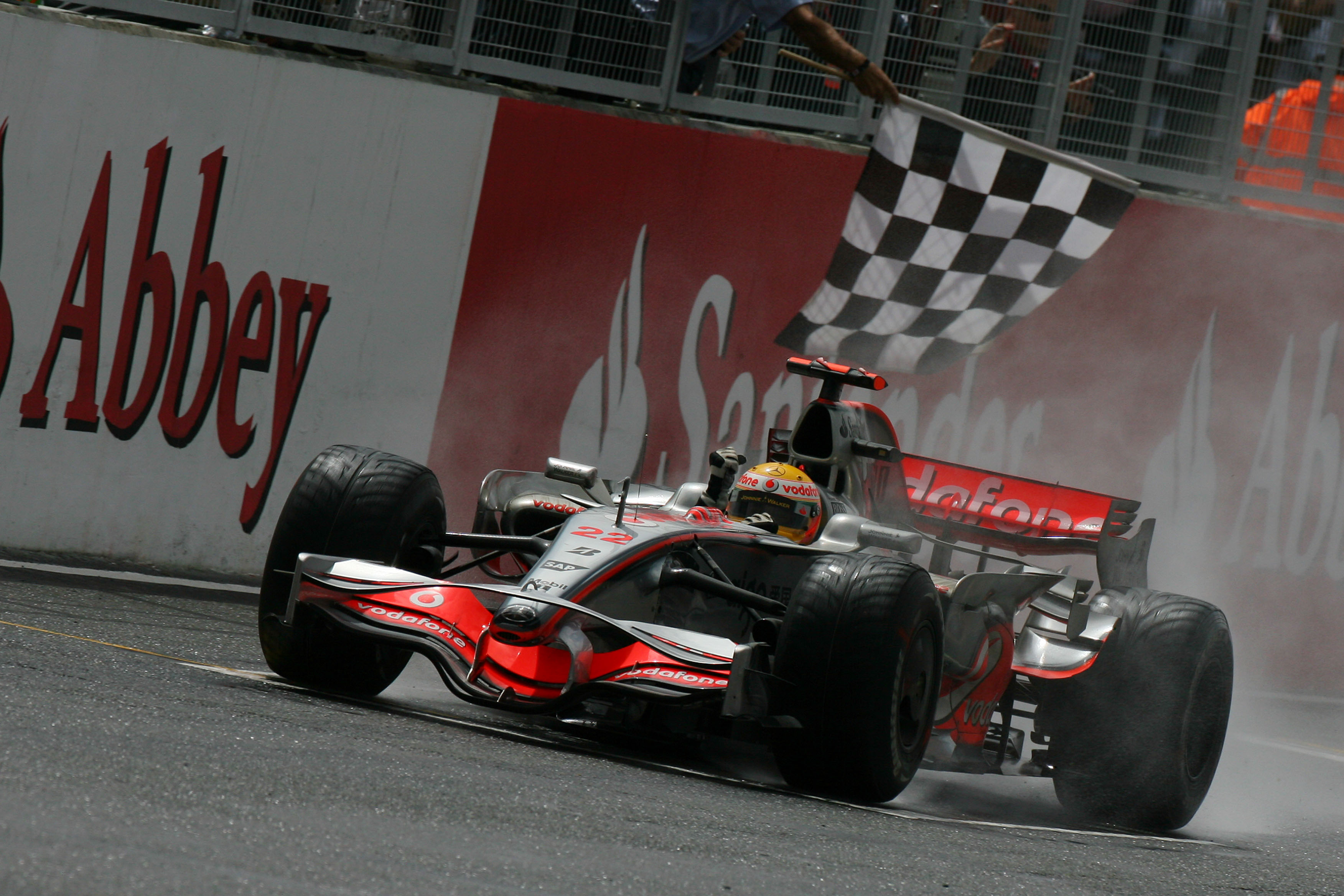 “You have to be very dynamic with your driving from corner to corner because the wet patches arrive, the puddles are shifting about with the cars that are driving ahead of you which is a massive challenge.”

Without throttle and steering traces it’s impossible to say precisely where Hamilton’s lap time came from but there some subtle and not so subtle differences in how he, Verstappen and Bottas attacked their fastest laps.

Hamilton was much more aggressive with moving his car to the inside in traction zones, namely the exits of Turns 1, 3 and 4. He was also much wider through Turn 3, whereas both Verstappen and Bottas aimed for the apex.

In between his two fastest laps Hamilton had an almighty aquaplaning moment up the hill which he somehow caught, but he had to back out of the lap. 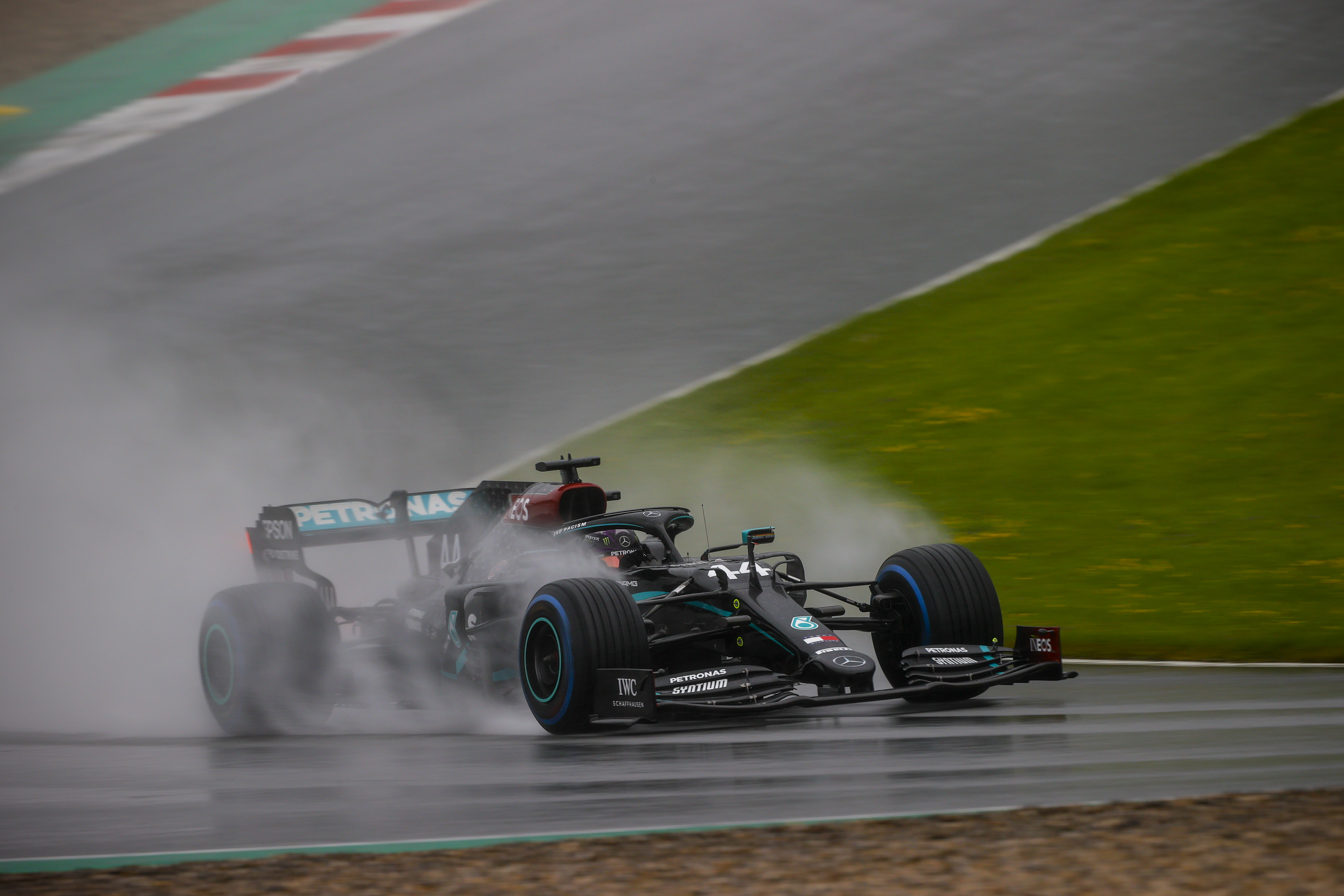 Aborting that early at least gave him some time to recharge his battery, and put a bit more distance between himself and Bottas having previously been driving into quite a prominent cloud of spray.

The next time, on his pole lap, Hamilton changed his line and remained committed through the kink before Turn 3 – Bottas, after a similar but smaller wobble himself, was less assured.

“It’s down to focus, it’s down to how you study the tracks. Probably your innate ability to be dynamic and manage the trickiest of conditions with the pressure on you” :: Lewis Hamilton

The rest of their laps after Turn 4 were quite similar, although Verstappen was the outlier with a much wider line into Turns 6 and 7, perhaps a legacy of his tendency to search for grip on the outside with karting-inspired lines.

Hamilton’s execution couldn’t be faulted, though.

“I think driver and car merge into one,” reckoned Wolff.

“Where a perfect car with the tyres in the right window and perfect drivability on the power unit, come together with skill and intelligence of a racing driver.

“And only then you see this kind of performances.” 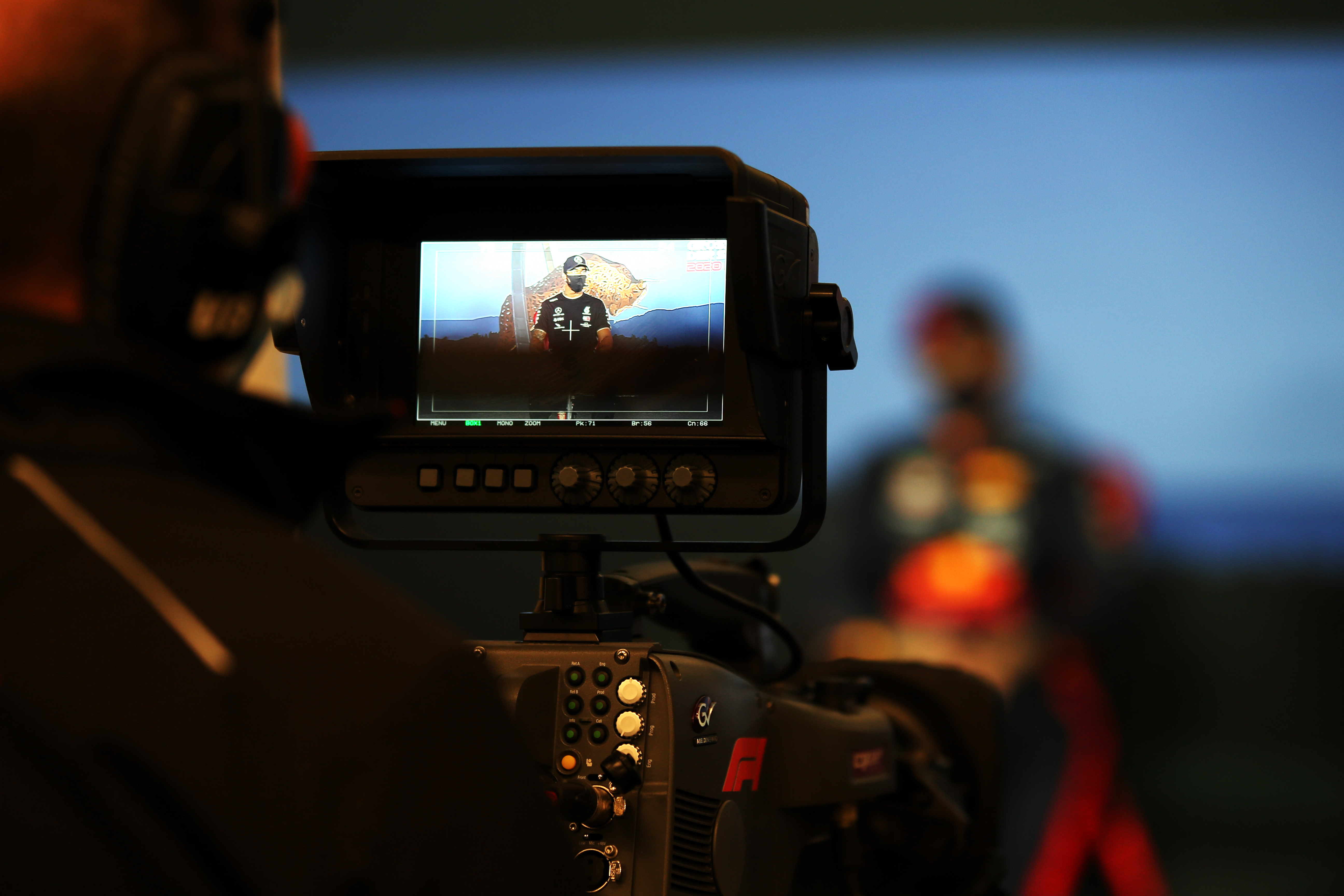 In Hamilton, Mercedes has a driver who is capable of complementing his car like very few others.

Admittedly Verstappen was caught out by the slowing Ferrari of Sebastian Vettel making his way into the pits, but even the Dutchman – who often finds grip where others can’t – ultimately didn’t have what it takes to match Hamilton on Saturday.

Hamilton looked uncomfortable when asked to pinpoint the reasons for his wet-weather prowess after qualifying.

“It’s down to focus, it’s down to how you study the tracks,” he said. “I think probably your innate ability to be dynamic and manage the trickiest of conditions with the pressure on you. 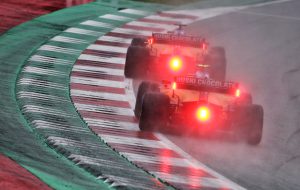 Gary Anderson: Why McLaren was the standout car in the wet
Read more

“That’s generally what the best athletes in the world do.

“In the last moments of an NBA game, and you’ve got Ray Allen taking that three-point shot, when that one counts…that’s really what makes those individuals stand out.”

Unlike a last-gasp throw to steal a victory at the buzzer, Hamilton didn’t actually need his moment of magic in qualifying to take pole.

But he didn’t know that. And it was as good an example of an F1 driver at his peak under pressure as this qualifying format can create. 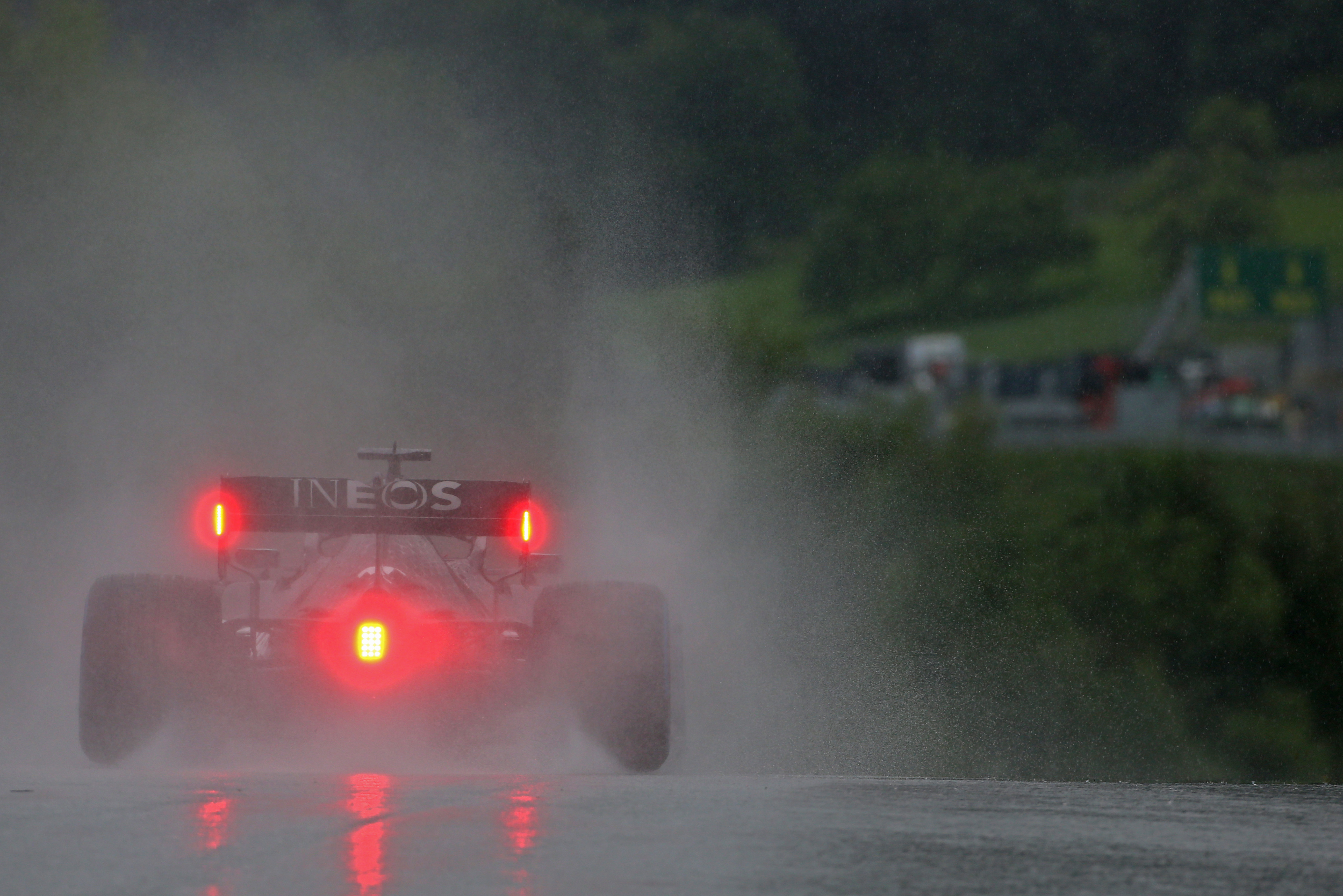