Hamilton battled back from third place to pass Verstappen and early race leader Valtteri Bottas to win the race, having lost second place to Verstappen when he was caught out on a restart after an early safety car.

After capitalising on a small error from Verstappen which gave Hamilton a run into Turn 1 with DRS on lap 11 – and then successfully fighting off a round-the-outside Turn 3 attack from the Dutchman – it took Hamilton another nine laps to catch and pass Bottas at the same place.

From there he edged away to take a relatively comfortable win, with his margin exaggerated when Bottas and Verstappen both took late pitstops in an attempt to claim fastest lap.

Verstappen got ahead of Bottas just after the proper pitstops. Red Bull pitted Verstappen first, and while Bottas rejoined ahead of him, the Mercedes couldn’t bring its tyres up to temperature quickly enough. Bottas got out of shape at Turn 3, allowing Verstappen to pounce with DRS on the run to Turn 5.

Bottas tried to fight back later in the race, almost getting in DRS range of Verstappen, but the Finn fell to five seconds adrift when an exhaust sensor briefly robbed him of engine power.

Verstappen appeared to win their late-race battle for fastest lap, by 0.016s, but his time was taken away for a track limits violation, meaning Bottas claimed the point for Mercedes instead.

The second Red Bull of Sergio Perez claimed a lonely fourth place, having run very long on his first stint, enabling him to take soft tyres at his only stop. Until Verstappen and Bottas pitted again to claim fastest lap, Perez briefly had that bonus point thanks to his strategy. 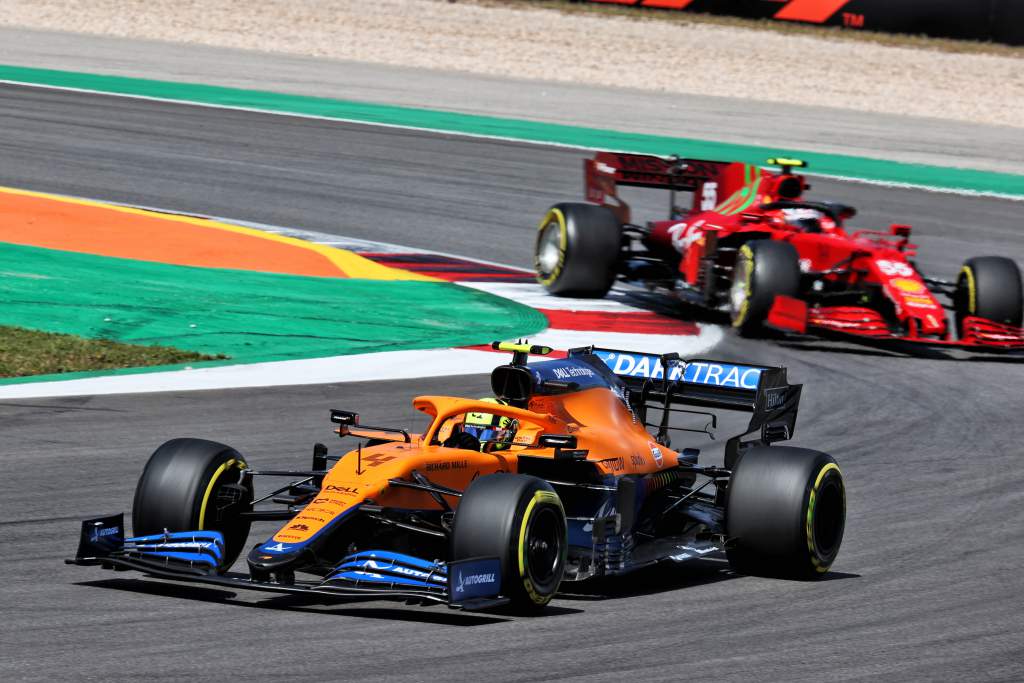 Lando Norris won the battle for best of the rest with fifth place, just about keeping Charles Leclerc at bay throughout the second half of the race.

Leclerc claimed sixth, having been let through earlier in the race by Ferrari team-mate Carlos Sainz Jr when it became clear that Sainz’s use of medium tyres didn’t work out in comparison to the majority of drivers who took hards at their pitstops.

Sainz’s race was miserable from then on, dropping him out of the points as he fell to 11th.

Esteban Ocon claimed seventh for Alpine, while a charging final stint from his team-mate Fernando Alonso was good enough to take eighth behind him.

After his disappointing Q1 elimination in qualifying Daniel Ricciardo raced his way into the points, making up several places at the start and then running a long first stint in a race where slow tyre warm-up and low degradation meant drivers could attempt to stay out rather than immediately responding when any cars they were battling came into the pits.