Lewis Hamilton has suggested he has personally “done well to avoid” major contact while racing closely with title rival Max Verstappen during the 2021 Formula 1 season so far.

The pair have gone wheel-to-wheel in all four of the opening grands prix, with the level of intensity in the dicing increasing over that time.

In Bahrain Verstappen had to relinquish the lead having exceeded track limits while completing a late pass on Hamilton, but at Imola it was Hamilton who came off second-best as he flew over the Tamburello kerbs while trying to go around the outside of his Red Bull rival at the start.

Hamilton gave Verstappen just enough space while overtaking him in Portugal, and then had to get out of the way in Spain as Verstappen went down the inside of him into the first corner to take the lead.

“I think I’ve done well to avoid all the incidents so far,” said Hamilton ahead of the Monaco Grand Prix when asked about the likelihood of a collision with Verstappen this season.

“We’ve got 19 more [races] to go and we could connect. Hopefully not.”

Hamilton has intimated repeatedly this season that he is trying to play the long game and is therefore more likely to prioritise the championship and give way in tight situations.

“The good thing is there is a nice balanced amount of respect between us,” Hamilton added.

“He feels perhaps he has a lot to prove. I’m not necessarily in the same boat there.

“I’m more long-term, ‘it’s a marathon not a sprint’ mentality. Which is ultimately why I have the stats that I have.

“I’ll continue with that and do everything to make sure we avoid connecting.”

Having won three of the four races so far, Hamilton holds a 14-point lead over Verstappen going into Monaco.

What’s interesting about Hamilton’s statement is what is left unsaid, but appears to be implied.

He talks avoid avoiding the incidents “so far” but accepts that there might come a point where something happens. 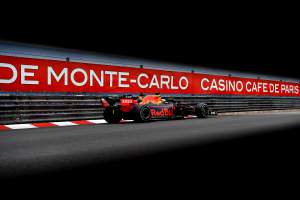 Gary Anderson: Why Red Bull could have the edge in Monaco
Read more

But there will be a moment where we are into the run-in, at which point it turns from the marathon Hamilton talks about into the sprint finish. There may therefore come a time when the irresistible force meets the immovable object and Hamilton isn’t willing to, as he puts it, “avoid the incidents”.

Hamilton’s wording suggests he feels he’s the one who has had to make accommodations on track, but there could be a moment when he feels the need to put a line in the sand and not be so generous.

Verstappen, of course, will also be weighing all of this up. He knows that for now Hamilton is willing to yield so will take advantage of that, but he will also know that there might come a time where he doesn’t.

So how far can he push it? Right now, he can only guess – but he’s right to take every advantage he can. It’s all part of the game that goes on in a close title fight, with drivers second guessing each other and balancing up the risk versus reward.

It’s impossible to know who will call it right. Hamilton has the experience advantage, but he’s not been up against Verstappen before in this context. So either could prevail.

It’s all about knowing your enemy. Hamilton knows Verstappen will be aggressive and doesn’t want things to boil over at this stage in the season, and Verstappen knows that.

But Verstappen also knows that there could eventually come a reckoning. The question is, when and if that actually happens.