Hamilton claimed pole by three tenths, ending points leader Verstappen’s pole streak in the process – although he’d already outqualified Verstappen at Silverstone, only to drop behind in the sprint race that determined the official pole.

Notably, only the two Mercedes drivers recorded their fastest Q2 times on the medium tyres, with every other car in the top 10 – including Verstappen – set to start on the softer tyre. 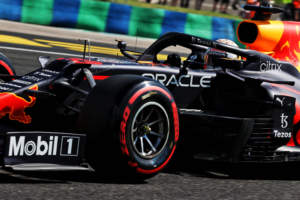 The opening runs in Q3 had established a Mercedes 1-2, with Hamilton 0.565s clear of Verstappen, who complained of “a massive lack of grip on this set”.

Verstappen then ran behind a leisure-paced Hamilton on his out-lap on the second set and only just managed to get a flying lap in time, which was an improvement – but still left him a tenth off Bottas and four tenths off poleman Hamilton, despite neither Mercedes improving on their final attempts.

Perez, behind Verstappen on his final run, didn’t get to start his flyer at all, but still remained fourth, narrowly seeing off AlphaTauri’s Pierre Gasly and McLaren’s Lando Norris – with Red Bull describing what transpired to Perez as “gamesmanship”, presumably from Mercedes. 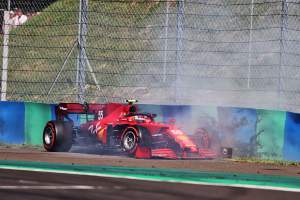 Charles Leclerc was the sole Ferrari in Q3 after Carlos Sainz crashed out, and took seventh, ahead of the two Alpines of Esteban Ocon and Fernando Alonso.

Sebastian Vettel did just a single run in Q3 and ended up completing the order in the final segment.

Sainz spun and hit the barriers at the final corner of his first flying lap in Q2, resigning himself to a 15th-place start at best, pending any potential penalties.

Sainz is ok, but his Ferrari has sustained a lot of damage #HungarianGP 🇭🇺 #F1 pic.twitter.com/3V4qER5f36

The Spaniard tried to drive back to the pits after the left-side impact, but the front wing broke off and got caught under his SF21, stopping it in its tracks.

Daniel Ricciardo was in the top 10 when Sainz’s shunt brought out the red flag, but team-mate Norris ultimately booked a Q3 place at his expense.

Ricciardo will instead share row six with Aston Martin’s Lance Stroll, the pair both around a tenth off Vettel in the final Q3 transfer spot.

Both Alfa Romeos had made the second segment, and Kimi Raikkonen ultimately ended a four-race run of being outqualified by team-mate Antonio Giovinazzi, beating the Italian to 13th place by 0.019s. 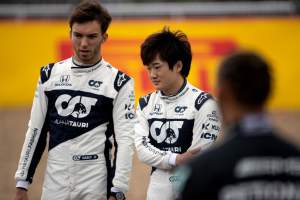 Yuki Tsunoda’s difficult Hungarian GP weekend continued, with the AlphaTauri rookie adding a Q1 exit – translating to a provisional 16th place on the grid – to his Friday crash.

The Canadian had a tenth in a half in hand over the Briton after the first sector, but ended up a tenth short in 18th and complained of “cutting” on the radio.

Nikita Mazepin was the sole Haas representative on track and placed 19th, with team-mate Mick Schumacher’s VF-20 not repaired in time – meaning he was forced to miss qualifying after a practice shunt for the second time this season.