Hamilton thrown out of Interlagos qualifying over wing issue

Lewis Hamilton has been disqualified from Brazilian Grand Prix qualifying and will need to start the sprint race from the back.

Hamilton qualified fastest at Interlagos to earn pole position for Saturday’s sprint race but an issue with his rear wing was referred to the stewards on Friday evening.

He has been disqualified from qualifying and may have to start the sprint race from the pitlane if Mercedes needs to change his rear wing to a different specification. If not, he can at least line up at the back of the grid.

Mercedes will not appeal the decision, saying “we want to win these world championships on the racetrack” in a tweet.

It was determined that Hamilton’s rear wing failed a check relating to its upper elements, which open up when the drag reduction system is activated.

Initially it was suggested that the distance between the upper elements was more than than the maximum 85mm allowed when the DRS is activated but it has been revealed that the elements did not have the required integrity when tested.

There is a device that tests whether these elements deform under a certain load by exerting force on them.

The wing should not open with less than 10Nm of force otherwise it could be affected by strong air pressure, which would potentially give a straightline speed advantage.

The stewards said this test was repeated four times with two different gauges. 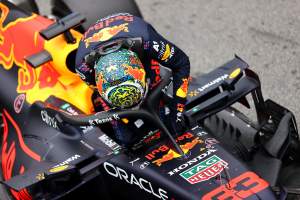 Mercedes had to report to the stewards at 7.15pm local time on Friday but the case was adjourned until Saturday morning to attain and assess rear-facing footage from the onboard cameras.

The rear wing was removed and sealed and Mercedes was not allowed to check it for damage or signs of an issue which is what it believes was the likely cause of failing the test.

Hamilton is chasing a 19-point deficit to Max Verstappen in the drivers’ championship.

He already has a five-place grid penalty for Sunday’s grand prix because of Mercedes’ latest internal combustion engine change.