Mick Schumacher’s accident at the Swimming Pool was the most spectacular moment of the Monaco Grand Prix, with the gearbox separating from the rest of his Formula 1 car.

I wouldn’t have liked to have been where Mick was sitting, but the longer any accident lasts and the more spectacular it is with bits and pieces flying off all over the place, the better it usually is for the driver.

He lost the rear, which pointed him right and sent him into the inside crash barrier front-on. He bounced off, which sent him sideways and backwards across the track. The left-rear then caught the end of the Tecpro barrier.

That then concertinaed along the Armco barrier as the car slid along sideways. The resistance this built up as it folded under the impact was enough to break the gearbox off the back of the engine. 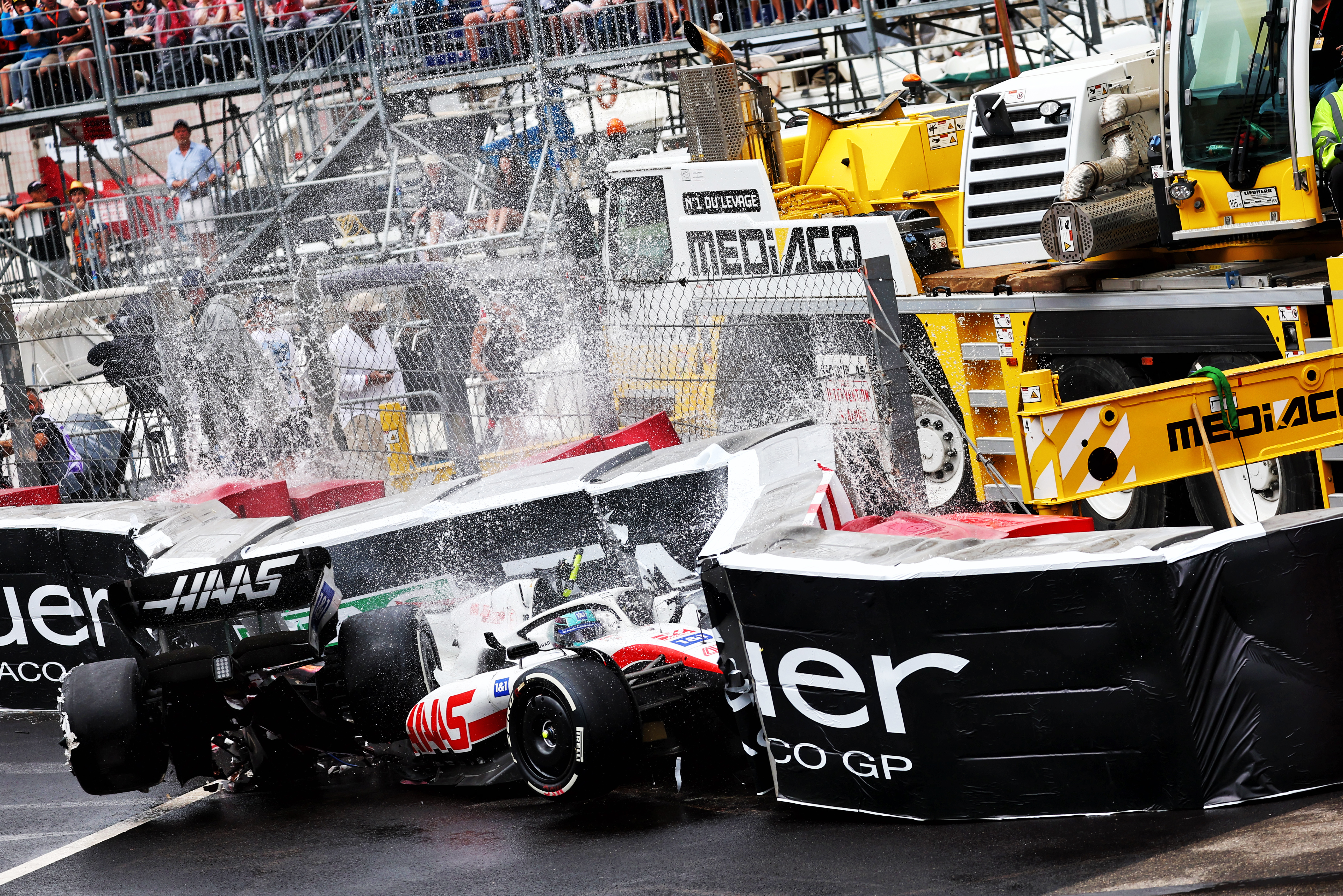 That’s the one thing I would say here is that the end of the Tecpro barrier should have been anchored more securely to the Armco retaining post, or had anchors of its own to stop it from being pulled along with the car.

This turned the Haas round and it then went nose first into the final part of the Tecpro barrier at the entrance to the slower second part of the Swimming Pool. By the time this happened, the car had thankfully lost a lot of speed, so that impact was not as big as it could have been. 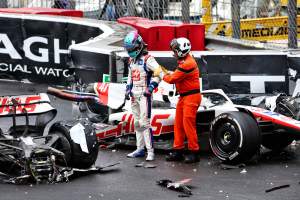 Initially, the virtual safety car was activated, which became a full safety car and then a red flag when everyone realised the Tecpro barrier required sorting – personally, I felt that took too long.

It was a big impact and although Mick reported he was OK over the radio quickly, it was clear the barrier would need to be repaired. There were bits of car, including the rear end, spread all over the track. Puncture paradise, as Yuki Tsunoda might say.

But what made the accident so dramatic was the fact the rear end of the car broke away from the engine. The question is, why?

Think back to Romain Grosjean’s accident in the 2020 Bahrain Grand Prix, when the engine and gearbox were torn off the car – taking most of the rear bulkhead with it and exposing the fuel tank.

After that, the FIA asked the teams to study carefully how the car might break up in a high-impact accident. Part of this was to find a way to ensure that the gearbox came off the engine before the complete unit broke away from the chassis, reducing the risk of a repeat of the Grosjean fire.

A tolerance of +/- 0.2mm will be permitted on all of the above dimensions, all dimensions refer to the centre of the studs. All dimensions in this Article refer to studs fitted symmetrically about the car centre plane.

Any part which provides an additional load path from the survival cell to the gearbox, with a connection to the power unit, may only do so if this is incidental to its principal purpose.

The objective of defining the X-Y-Z coordinates and size of these fixings is to make it easier for a team to change engine supplier or gearbox supplier. However, the details of all four engine suppliers’ packages have deviated so much over the years that this rule has outstayed its welcome – and with that probably compromises the structure of some cars in some areas.

As you can see from the regulations, you can either use four or six gearbox-to-engine fixings. In the picture below, the four fixings that Ferrari, whose power unit and gearbox Haas uses, are circled in red. 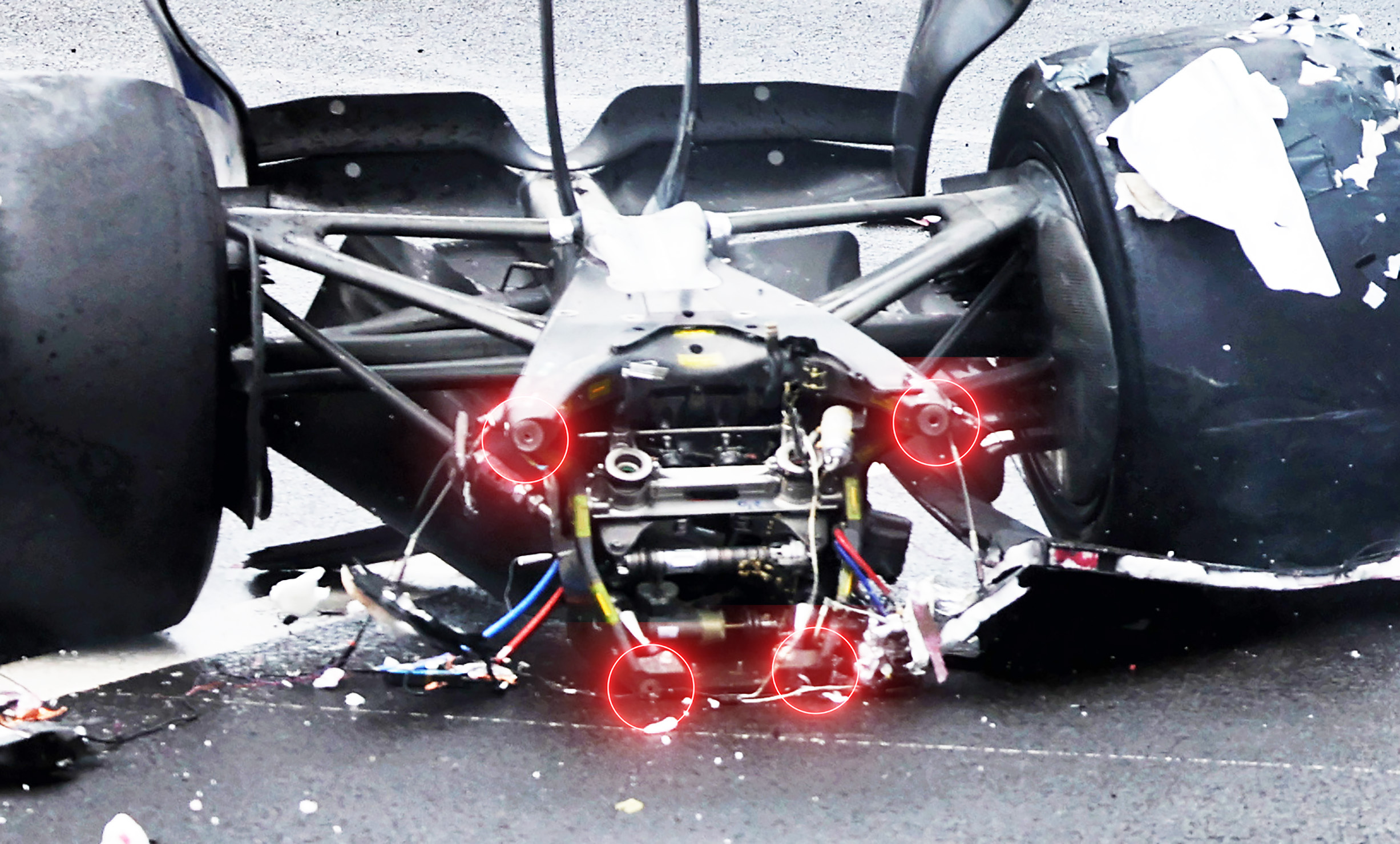 A closer look shows that the gearbox is still more or less intact and there are no engine casing parts still attached. This means that the fixing studs have either broken, or the retaining nuts have popped off with the load. Either way, it’s a little worrying not just for Haas, but also for Ferrari.

This isn’t the first time this has happened this year. In Saudi Arabia, Schumacher crashed during qualifying, an accident that had more or less the same end result – albeit with a bigger impact into a concrete wall. The gearbox didn’t separate from the car in the impact, but it did part company under its own weight when marshals lifted the car to recover it. 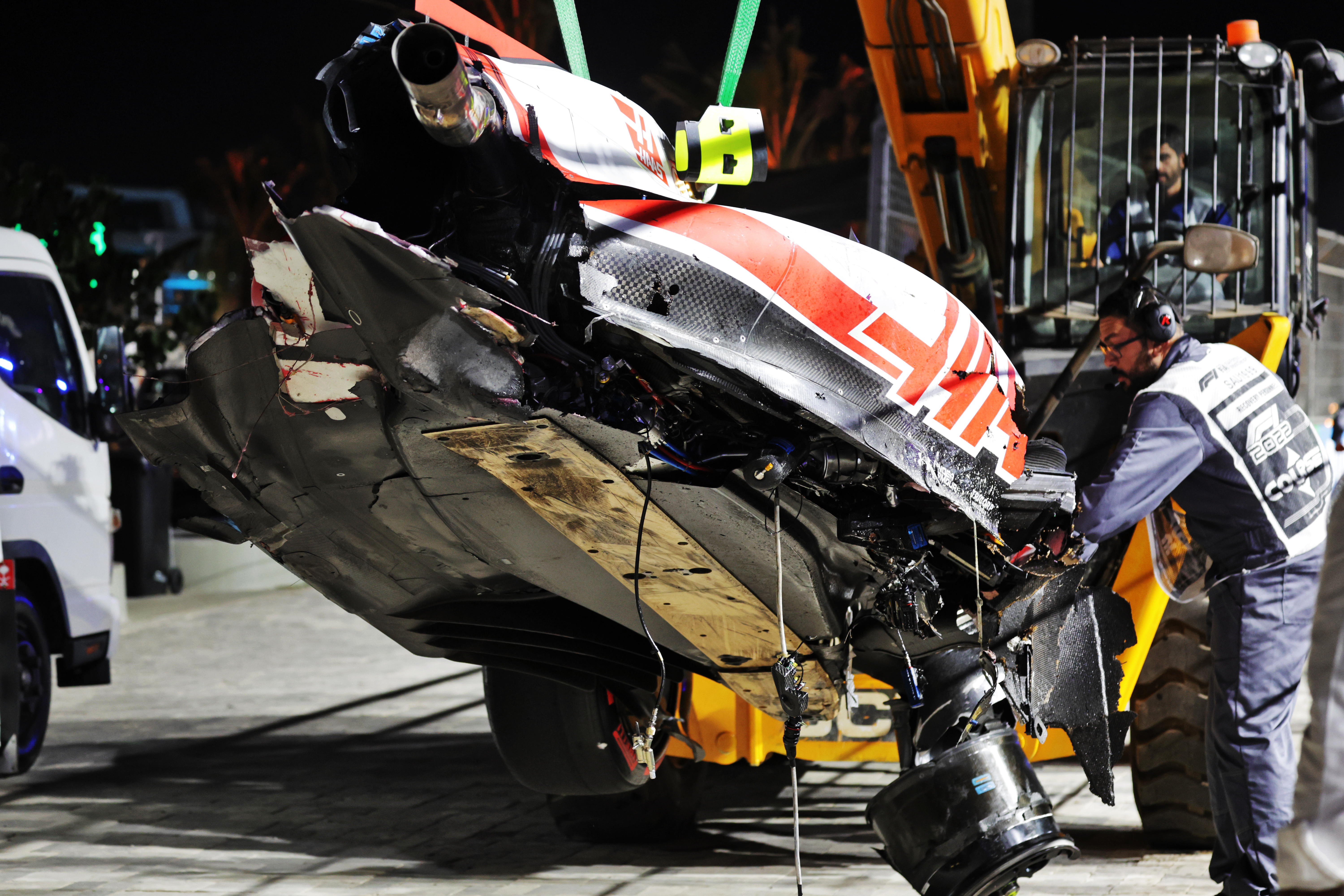 Looking at Schumacher’s Monaco car, the rest of the car has a bit of damage around its periphery but it’s all stuff that you’d expect to lose in a crash like this to decelerate the survival cell. That’s the important part that contains the driver.

F1’s safety regulations have been continually improved since the deaths of Roland Ratzenberger and Ayrton Senna at Imola in 1994. We can thank everyone involved in that process for the many drivers who have been saved from injury or even death over the years.

It’s got to the point now where some are saying the cars are too safe. I don’t agree with that because you can never cut back on safety.

However, some of these younger drivers might just need to step back and recognise the fact they are not infallible. They need to respect their own safety, because you can’t legislate for every situation and an accident with much greater consequences might just be around the corner.