There’s been lots of talk in Formula 1 about freezing power units and equalising performance, brought on by Red Bull’s desire to continue to use the Honda engine package once the Japanese manufacturer has pulled out following the 2021 season.

But as always, this is all about the manufacturers looking after their own interests. There’s nothing wrong with that, but a much wider view is needed when it comes to these proposals to ensure they are consistent and deliver the best outcome for F1 as a whole.

What needs to be factored into these discussions is what the enthusiasts and viewers really want from F1. These two groups might sound like the same thing and could therefore be boiled down to “fans” but there is a reason for separating them. 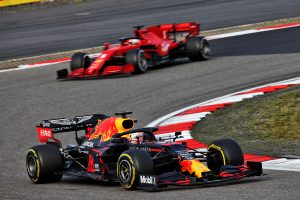 The enthusiast has an understanding of the complexity of F1, but the casual viewer doesn’t and we need to remember that the casual viewer is the largest proportion of the audience F1 wants. They are the reason sponsors want to promote their product and without such partners, F1 will very quickly become a club series.

So what do these enthusiasts and viewers want? First and foremost, competitive races that keep them interested from lights out to chequered flag with the result not a foregone conclusion. But races like the Sakhir Grand Prix, which is probably the best race I have watched in the last 10 years, don’t come along very often.

I don’t think anyone would have complained about Mercedes, Red Bull or Ferrari in their years of dominance if the competition was a bit closer. For a team to dominate as these three have done since the turn of the millennium simply shows that they put together the best package during that era.

We all complained when Michael Schumacher was winning everything, then when it was Sebastian Vettel’s turn at Red Bull and now it’s all about Lewis Hamilton. It’s often questioned in terms of ‘is it the driver or the car’ but in these cases, it takes two to tango. It was never simply about one part.

You can prove that simply by looking at the second driver in those dominant teams. Schumacher had Eddie Irvine, Rubens Barrichello and Felipe Massa, Vettel had Mark Webber and Lewis Hamilton had Nico Rosberg and now Valtteri Bottas.

It’s not just the good old, normally-aspirated internal combustion engine that makes a difference. Today’s power units are so complicated

They are very competent drivers and race winners, but only Rosberg was able to snatch a championship away from a dominant team-mate. As I always say, the cream rises to the top and the case of these three top drivers, who between them have won 18 drivers’ championships with five different teams, just shows that.

And if we look at the three main elements that make up a winning package – the chassis, the power unit and the driver – it proves that the driver is still a very important piece of the jigsaw, especially when it comes to winning championships.

The chassis regulations keep changing in the interests of better racing. It will always be difficult to come up with rules to create, or even to design, a car that travels through the air generating forces to give it grip without being affected by turbulence from the car in front. And we know that a fast car allows you to qualify up front, at which point it doesn’t matter if you can’t follow and, under normal circumstances, the race is in the bag.

So this brings us back to the question of the power unit. Of course, there are differences between them and that has always been the case, and unless it becomes a one-make engine formula, more or less like in the old Ford DFV days, there always will be. And even then, there were differences between DFV engine builders.

The main problem is that it’s not just the good old, normally-aspirated internal combustion engine that makes a difference. Today’s power units are so complicated, so we now have:

So instead of one difference, there are now six or even more devices that can affect the outcome from one manufacturer to another. And on top of that, it’s how you use all of these systems together that gets the best out of it.

After all, harvesting and deployment doesn’t come from a Halfords manual, it’s down to the depth of knowledge and simulation you have within your team.

Looking at each power unit manufacturer and trying to understand their reasoning behind their current positions is very revealing.

Why would Mercedes agree to anything that might make it less competitive? It has shown for seven years that it has the best handle on these hybrid regulations and it has a winning package.

Toto Wolff talks of the beginning of the end of Formula 1 If any kind of engine freeze is implemented, I think this is fairly dramatic.

I have been involved in F1 since the early 1970s and have seen many changes, but it still exists and I’m pretty sure it will still be in vogue for years to come.

Ferrari has suffered this year with its power unit performance as a result of the series of technical directives produced following its ‘confidential settlement’ with the FIA. So Ferrari is pushing very hard with its 2021 engine.

It has had to burn the midnight oil and if Ferrari is successful and takes a big step forward for 2021 it would be in its interest to get a power unit freeze from the end of 2021.

As far as allowing manufacturers who haven’t done as good a job to have different fuel flow regulations to level the playing field, as suggested by team principal Mattia Binotto, then, for me, this is a no-no. If you believe the speculation about what it was up to previously, perhaps it has experience in that area from pushing into the grey areas in 2018 and 2019?

Renault started the hybrid era with a package that didn’t produce the power required and was unreliable. But it has worked through that and, as of right now, probably has just about the second-best power unit.

Part of that is down to Ferrari shooting itself in the foot, but Renault must keep its focus. Although still behind Mercedes, it is in a reasonable place.

Of course, Renault is obliged to supply Red Bull and AlphaTauri by the regulations if a deal is not struck to continue to use the Honda engine. So it’s possible Renault will be willing to support Red Bull’s position but not before showing unwillingness to comply without protest.

I have grouped these two together because Honda is pulling out at the end of next season and Red Bull is pushing for this freeze to allow it to take on Honda’s power unit project.

Red Bull has always been very vocal about problems with its engine suppliers. When it was with Renault, there was still plenty of finger-pointing and stone-throwing. Surprisingly, it has done the same with Honda. At the smallest problem, it’s very quick at dividing blame for who is or was responsible for any problem – especially if it’s on the Honda side.

Building ‘replicas’ of a current package is one thing, but keeping developing it is a completely different beast – and massively more expensive.

But why should Mercedes, Renault or Ferrari agree with this freeze or any sort of power unit performance equaliser? Especially as these three know that if the tables were turned and one of them was requesting this freeze that the answer from Red Bull would be a very short and sweet, ‘no’.

Everyone hates the idea of a handicap system and I completely agree, but unfortunately, it already exists. It’s called budget.

In the end, it’s a spiral: big-budget, success, attract better people, bigger sponsors, more success and round and round it goes.

But what matters is that the enthusiasts and viewers are still engaged. In order to ensure that there needs to be a little give and take from all the engine manufacturers so the best is made of what we’ve got now before the next generation of power units comes in, whatever form that takes.

Performance balancing won’t be the answer and certainly not by changing the fuel flow because then it will be too easy to play the system. This is where the FIA and F1 come into play and make sure whichever engine company is struggling really is struggling and has the opportunity to improve its performance but without giving it something for nothing.

By knocking some heads together and, as in days of the engine freeze during the 2.4-litre V8 era, allowing some common sense changes if one or more manufacturer is falling too far behind, we could have something that works for everyone.

After all, what we all want to see is closer racing without one manufacturer rushing off into the distance and embarrassing the others.