Gary Anderson: What F1 must learn from this confusing farce - The Race
Skip to content
Formula 1

Gary Anderson: What F1 must learn from this confusing farce

Eighteen years ago in Brazil, we had a race that had very similar conditions to what we saw at Spa. But eventually, some logic and reason came into play and eventually we had a race – in fact, one of the best-remembered races in the past 20 years.

Yes, the start was delayed and got away late behind the safety car, but after eight slow laps it got under way. There were various incidents and accidents, yellow flags and in the end a red flag when Mark Webber had a huge accident and Fernando Alonso collected the debris.

That race ran to the letter of the regulations and the red flag was shown just after the 75% distance had been reached. By understanding the regulations on that day, it allowed us – Jordan and Giancarlo Fisichella – to win the race. Yes, the result was confused for a few days, but in the end we got the trophy.

That day at Interlagos, the teams, fans at home and thousands of people in the crowd got what they came for – a race and that was a great thing. Of course, I would say that because of who won, but I’m sure everyone at Spa today wanted a real race to happen. Instead, everyone was confused by what was happening and the outcome was bad for Formula 1.

If the same scenario happened today and I was on the pitwall running a team, I would have no idea what decisions to make. The FIA are showing their relative inexperience in these changing conditions.

When the late Charlie Whiting ran the show, he stuck to the regulations. He was hard but fair and we all knew exactly where we stood. It’s so far away from that now that something needs to be done.

The teams, and especially the guys on the pitwall trying to run the cars, will be as upset with the questions over the radio to the FIA as the spectators who were not being able to see the cars running. They have paid good money to spend their weekend in Spa and see the F1 cars up close, but it’s a farce to have to spend the whole day in the rain without a proper race.

No one pushes for safety more than me and I completely understand any decisions that reduce that risk. But if we follow that through, we should just stop racing in the rain altogether. 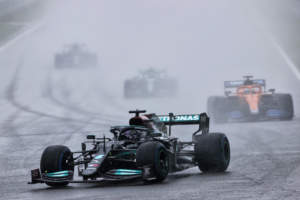 We have seen times like this when races have had long periods under the safety car conditions, such as Fuji in 2007 and Korea in 2010. Going back even further, the 1976 Japanese Grand Prix at Fuji was delayed by rain but with time running out, they got on with it.

There needs to be a long, hard look at the regulations after this. Michael Masi didn’t seem to realise it was legal for Sergio Perez to start the race given the wording of the rules, so if the intent is for a driver that crashes or breaks down on a reconnaissance lap not to start then the rules need to say that.

Likewise, we need clear rules on what happens in these conditions. The three-hour time period to cover the whole race was meant to make that all clear, but then the FIA found a way to overrule that using the International Sporting Code.

The focus seems to have been simply on ‘technically’ getting a race done. By that I mean that we had two laps under the safety car before the red flag and then half-points were awarded. No matter how brilliant Max Verstappen was to get pole positions in the wet conditions, that’s hardly a grand prix win. After all, he was keen to get going.

This was more about ticking the boxes to comply with the contracts with the race promoter and broadcasters. If it was a serious attempt to get a race going then they would have continued to run under the safety car for a bit longer. 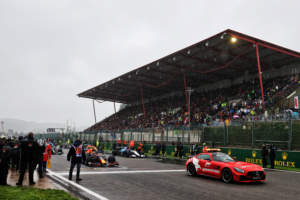 I’ve suggested a way to attempt to do this before. After a lap or two under the safety car, the safety car should pull in but the yellow flags stay out. The leader dictates the pace with no overtaking and they can feel out the conditions and build the pace and clear off the worst of the water. We know how much water can be moved by these cars as the speed builds.

The uncertainty with race control also meant that the fans had no chance of knowing what was happening. We had a few laps under the safety car that were officially formation laps but the race didn’t start – but at the same time the three-hour race limit clock was running. Try explaining that to the fans at home.

One thing I would say is that it’s not practical to put the race off to the Monday. The people who really make these events happen are the marshals and most of them will be doing their day job then. It takes a lot of people to put a grand prix on and a lot of them won’t be available.

I have sympathy for the situation the FIA and Michael Masi were in. It’s a fast circuit and the visibility in these conditions was terrible so you can’t just send the cars off. But eventually you have to find a way to get some racing in and it’s down to the drivers to be responsible. And we have seen races held in these kinds of conditions before.

The only time we shouldn’t have a race is when the water is so deep the car simply aquaplanes and rides on top of the water. If it’s about vision, then we really need to do something within the technical regulations to reduce the spray. The regs are changing for next year so is this an opportunity to increase the size of those mudguards.

I’ve said before that the decisions on this shouldn’t be made by race control. Instead, it should be down to the experienced, top drivers – say the world champions – to make the call. If Lewis Hamilton, Sebastian Vettel, Fernando Alonso and Kimi Raikkonen collectively said it’s OK, then that’s alright by me.

Formula 1 has to learn from this. It’s time to tidy up the regulations so they are clear, make sure race control knows them and also do better at both ensuring the crowd at the track and the fans at home get a race – and understand what is happening.