It has taken a while for the Formula 1 teams to get on top of the new-for-2022 rear wings and start to introduce their full new ‘family’ of assemblies for the different circuit requirements.

This process is still ongoing as teams build a better understanding of the trade-offs and compromises involved, but the recent Canadian Grand Prix weekend produced some interesting case studies. 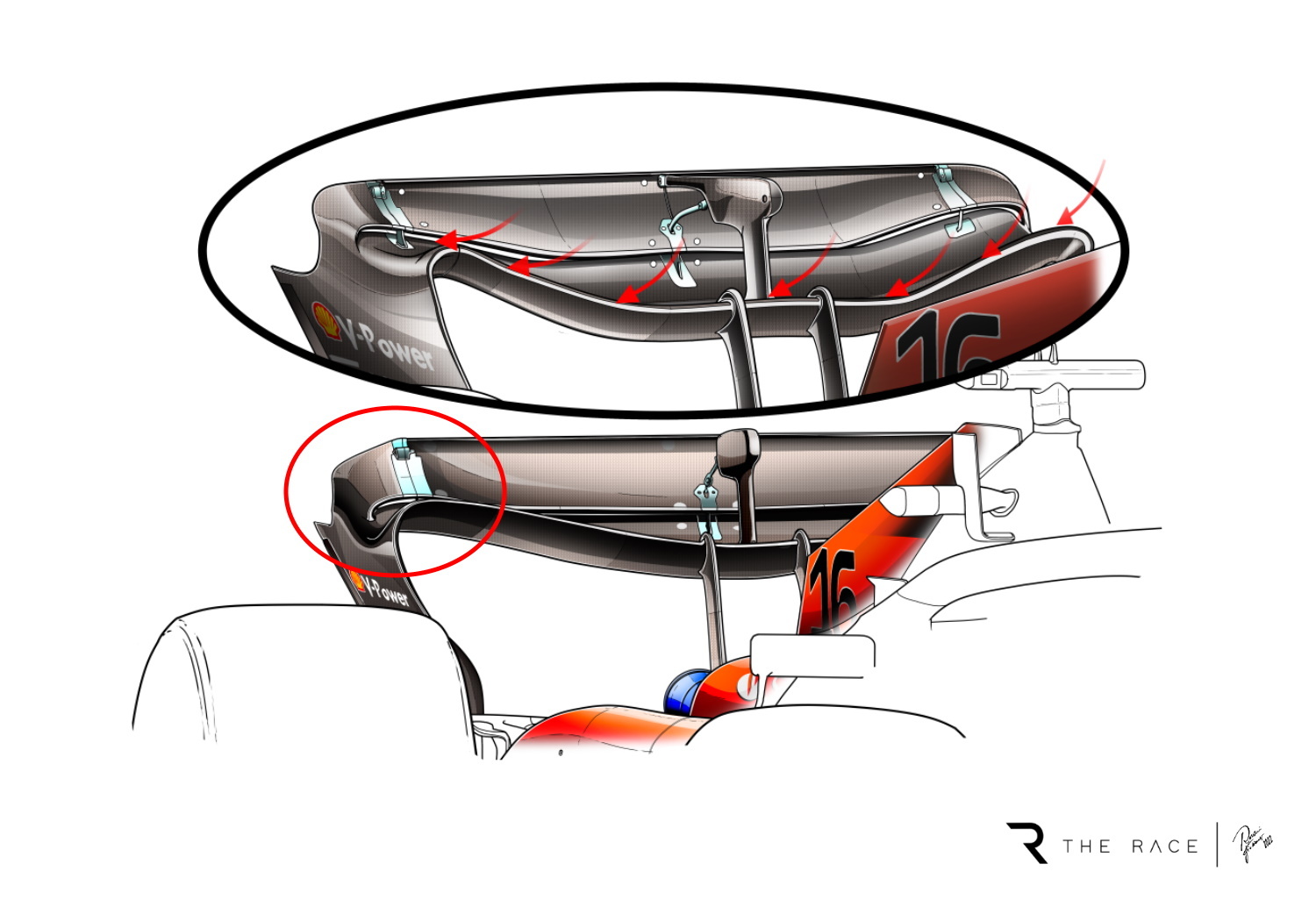 In Montreal, Ferrari tested – and on Charles Leclerc’s car raced – a new specification of rear wing, while Mercedes split its approach with Lewis Hamilton on the latest low-downforce version and George Russell on an earlier, higher-downforce, version. 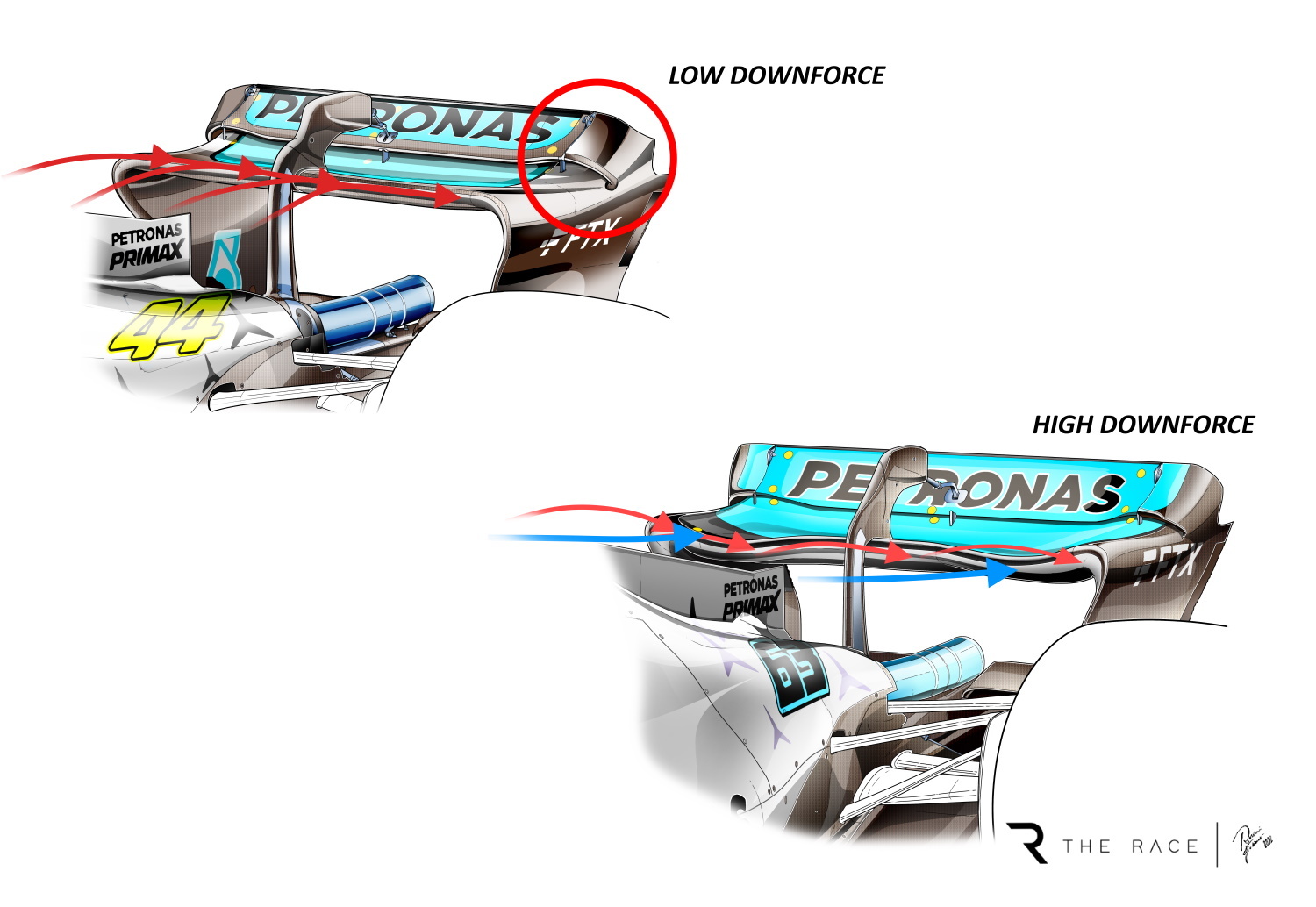 It’s the endplates circled in red on both illustrations that interest me. It’s strange to see two teams as far apart as Ferrari and Mercedes in terms of car concept turning up with a similar solution in this area.

Up to now, we have seen that the trailing edge of this outer corner intersection from the wing flap element to the endplates has been a simple radius. This has meant that this area created upwash combined with some level of outwash.

But for this new philosophy, the wing flap detail drops away immediately outside of the DRS outer pivot point.

This will mean that when the DRS is active, the drag reduction will be increased. Having reduced the two-dimensional expansion that the airflow had to do on the underside of the wing surface in that area, it also means reattachment in this area will happen faster and be more consistent.

It also looks like the mainplane on Ferrari’s new version has a shorter chord on the outboard end. 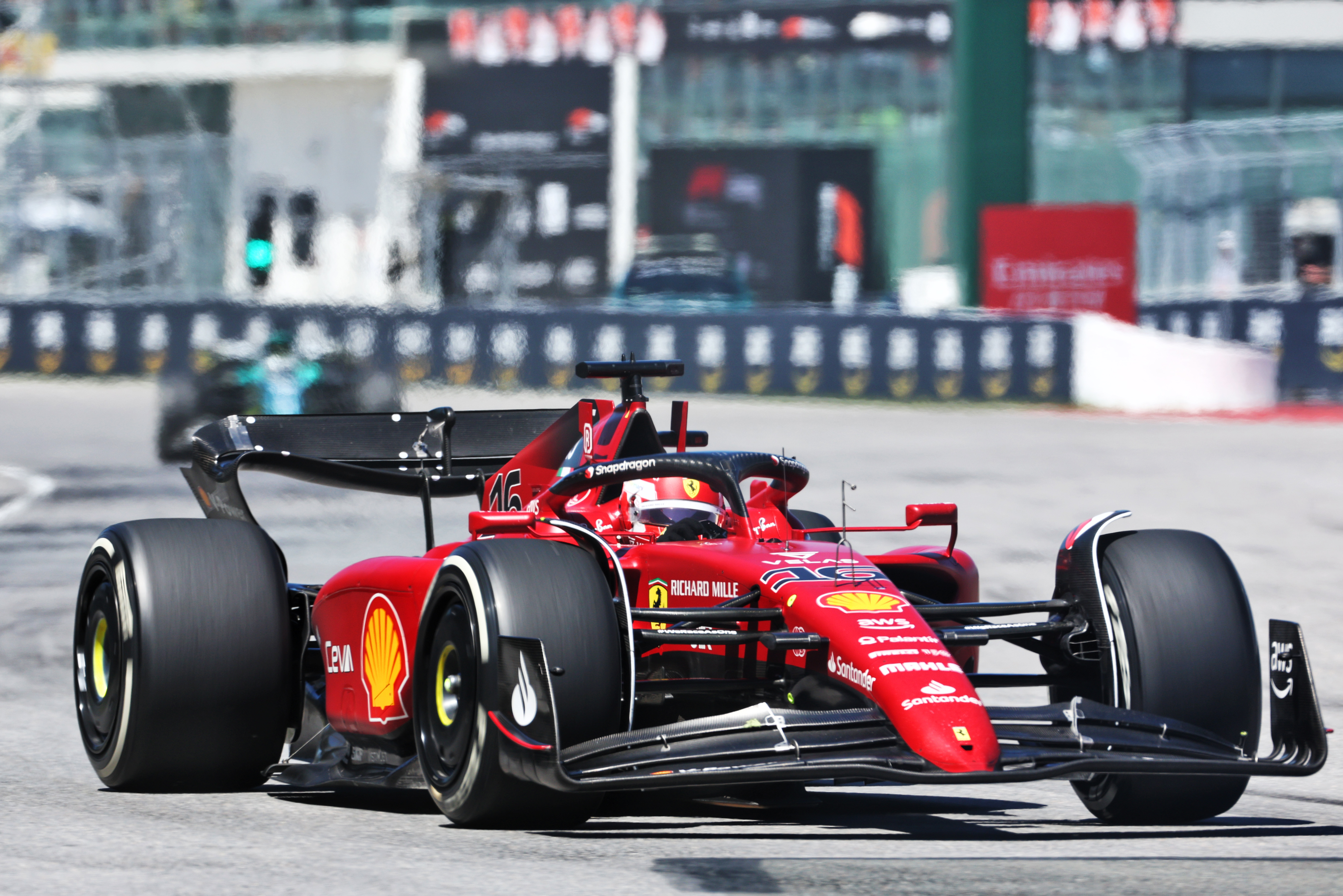 We can also see its design trend is to use a much deeper central wing section. Ferrari is trying to produce the maximum load from that area which in turn will help with the extraction of airflow from the diffuser, doing this whilst reducing the wing section as it moves outboard is to improve the overall efficiency.

Being as consistent as possible with this design philosophy means that the effect the rear wing wake has on the underfloor will also be more consistent, meaning there are fewer surprises in how the car affects the overall airflow.

By contrast, Mercedes seems to have changed the philosophy of the overall rear wing package.

Yes, the outboard ends of the new flap follow the same design trend as Ferrari but its new version has a more uniform mainplane leading edge (red arrows) meaning that it believes with its ‘zero sidepods’ the angle of attack of the airflow on the rear wing is more uniform.

On the older, higher downforce version, the central section of the leading edge sweeps upwards slightly. This indicates that the flow direction in this area is arriving at an increased angle of attack (see the red arrows compared to blue arrows), again meaning that the airflow coming around and over the zero sidepod section of the car has a lower angle of attack.

In the race in Montreal, Hamilton was faster than Russell in all the end-of-sector speed traps. Through the main trap on the back straight, which is the fastest section, Hamilton hit 331km/h (206mph) compared to Russell’s 307km/h (191mph).

Carlos Sainz, running the old Ferrari wing, hit 331.3km/h (205.9mph) in the main sped trap, with Leclerc 342km/h (213mph) on the new wing, so the Mercedes difference was far bigger than for Ferrari.

If this was down solely to the rear wing – and I am sure both had the use of DRS at some point – then it suggests it’s a major step in the correct direction.

The team itself said Russell ran a higher downforce level, but personally, I suspect there is probably a little bit more to it than that and that softening and raising the car slightly after Hamilton struggled on the Friday has rewarded Mercedes much more than expected.

Having a car beating itself to death on the track surface at high speed from a combination of porpoising and bouncing is not the best way of going about optimising your maximum speed.

Who's excelled in the first half of the 2022 Formula 1 season and who's wasted their potential? Here are our team-by-team report cards

Formula 1 has finally approved its new engine regulations for 2026, paving the way for ‘new’ manufacturers such as Audi and Porsche to enter F1 in the near future

Team-specific excellence or a sign of burgeoning series popularity? The Race takes a look at what Alfa Romeo's 32 new partners say about Formula 1's popularity

The races that saved – and then made – Formula E