The car changes for Formula 1 in 2022 aren’t only about aerodynamics, with one of the most interesting areas being how the teams approach their suspension concept and geometry both at the front and rear.

The new 18-inch wheel rims having a larger diameter opens up a whole new can of worms in terms of the wishbone layout.

Aerodynamics have been the dominant factor in car design for many years now and the poor old tyre has always come off second best. I always say don’t complain about the tyres until you give them the best chance of operating within their design constraints, and now is the time for the balance to shift. 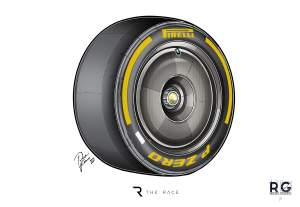 If the car had a good balance in the high-speed corners in 2021, the trend was to understeer in slow-speed turns. I don’t see why that will change in 2022, but with the change to bigger rims and the reduced sidewall height the suspension geometry is going to be more important because you will be able to have more control over the tyre tread belt – which is the part of the tyre that gives you the grip.

But there are also changes to the wishbone layout. Gone are the cranked top wishbone pick-ups that Toro Rosso and Mercedes pioneered in 2017 and that many teams followed. For 2022, the wishbone-to-upright pick-up has to be inside the inner plane of the front wheel.

Also eliminated are the extreme outer pushrod-to-upright pick-up positions that effectively allowed the teams to lower the front ride height for slow corners when more steering lock was applied. 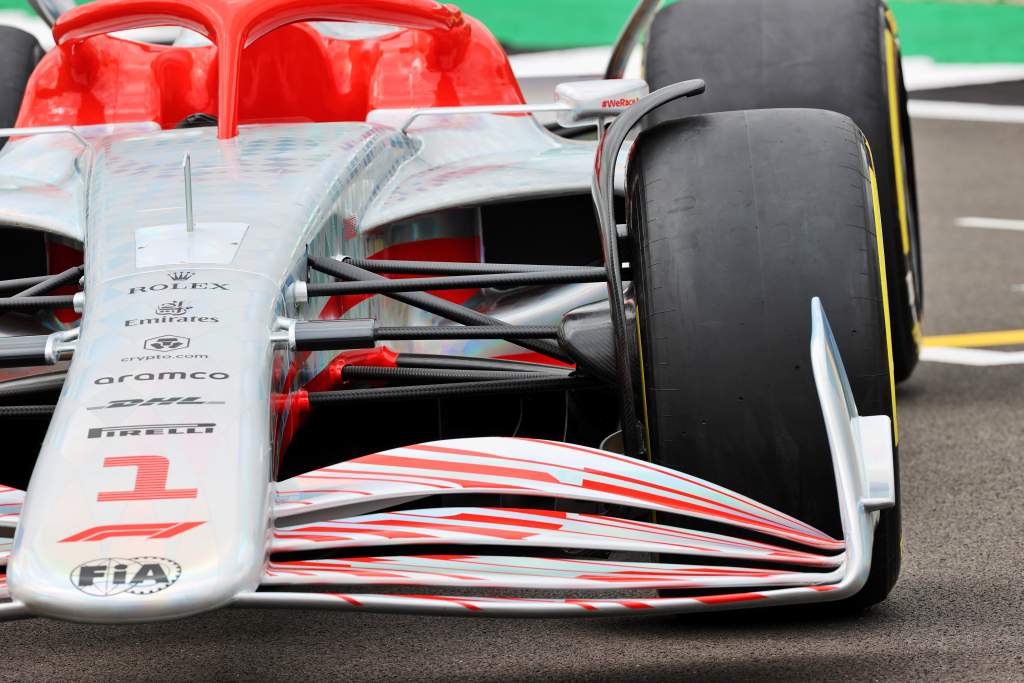 For 2022, the maximum amount of ride height change you can generate at the centreline of the car when 12 degrees of lock is applied is 2mm. Before that, it wasn’t controlled. This also allowed you to jack weight around the car, which you can still do as long as the ride height doesn’t change too much.

In the regulations for 2022, there is also a relationship between kingpin inclination and castor that will reduce the amount of camber change you can create when steering lock is applied. Both of these changes will induce more understeer in slow corners, one because the front ride height will be higher than ideal, two because the tyre contact patch will be smaller than ideal. 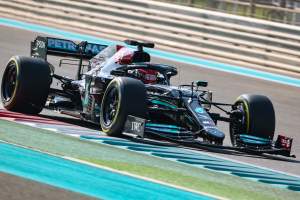 The tyres have a slightly larger diameter, so it is not just a simple reduction of 2.5-inch in the sidewall height – it’s more like a 2-inch reduction – or in today’s money 50mm.

This means that the relationship of the tyre-tread belt and the rim stays more in tune with each other. That can cause problems between the amount of camber you need to run for high-speed corners with high g levels relative to the tyre contact patch in slow lower g-level corners.

There are also more regulations to make sure the front and rear suspension work independently. In the past, this has been a bit vague but for this year remote helper springs or dampers mounted somewhere in the sidepods and hydraulically operated have also been outlawed.

So for the design teams, it’s a whole new kettle of fish to get your head around. Everything that supports the car at each end including the rocker, heave damper, third spring, torsion bars and anti-roll bar will need to be packaged somewhere in its own operating area. 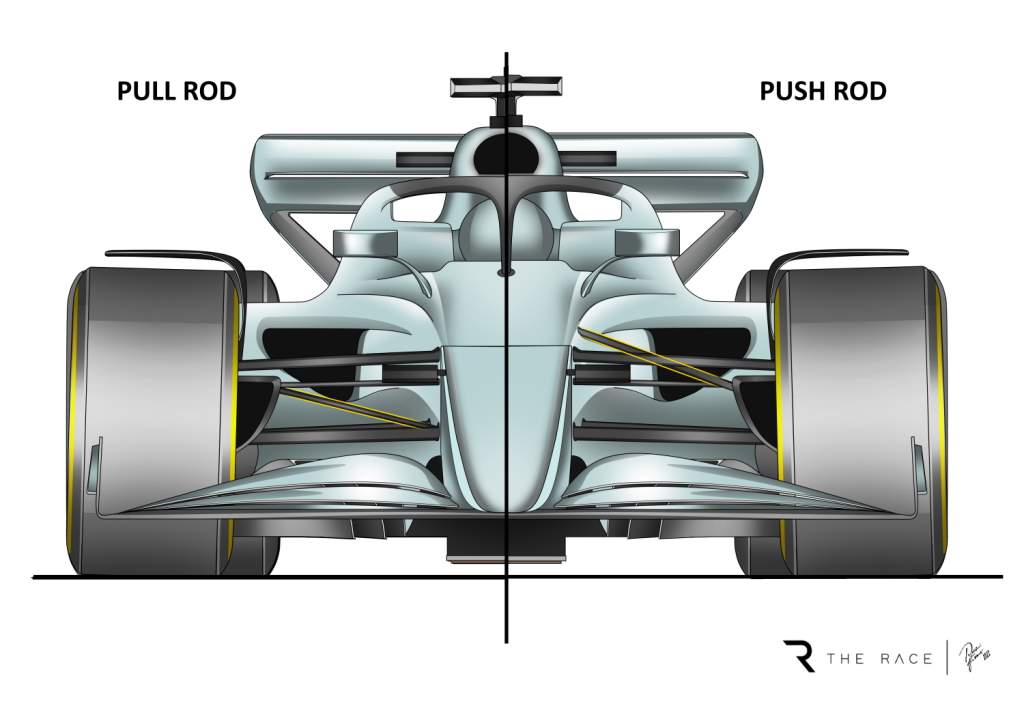 With the larger diameter wheels and the lowered chassis height in the area of the front suspension, I wouldn’t be surprised to see a few teams go from the common pushrod suspension to a pullrod suspension set-up.

Ferrari went that way in 2012 and McLaren in 2013, but during that period getting the chassis height to its maximum for aerodynamic reasons outweighed the benefits of the reduced centre of gravity by having that gaggle of bits mounted low in the chassis instead of high up. 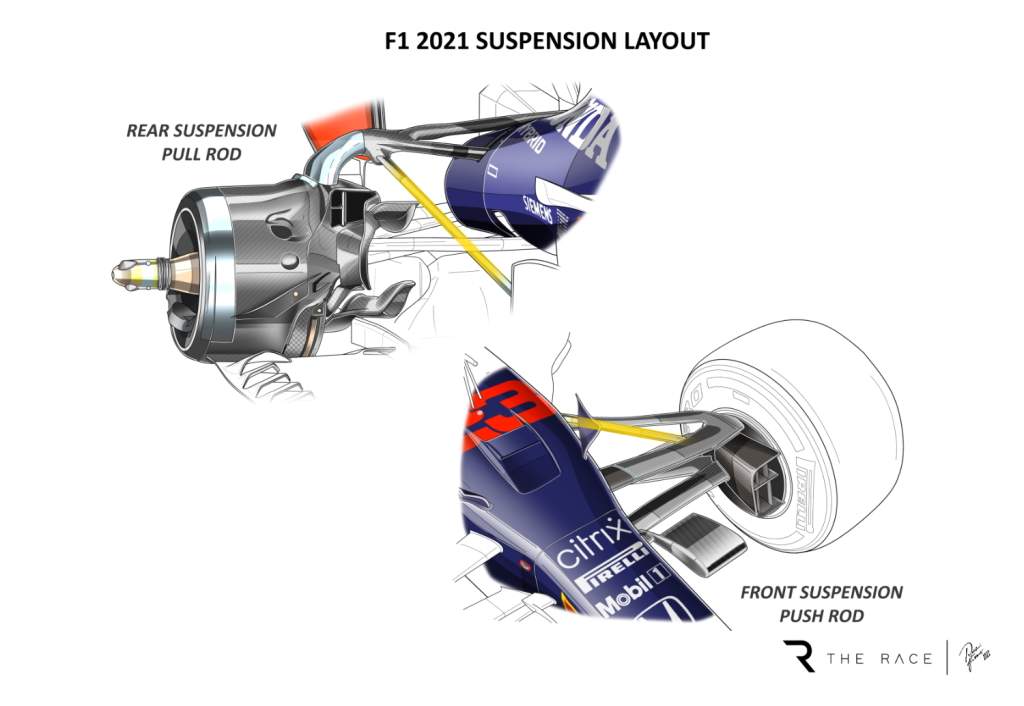 As for the rear suspension, it has been very neatly packaged inside the bellhousing between the engine and gearbox for quite a few years. So I don’t really see a need for major changes to that inboard section of the suspension.

However, Mercedes showed a couple of years ago that there were still aerodynamic benefits from the diffuser by relocating the wishbones themselves. As the diffuser is going to producing more downforce this year, that same philosophy and research direction will still be valid.

For me, the suspension concept is the big area where you need to get it right from day one. The mainstay of the car – the chassis, which all the suspension mounts are part of – will long since have been committed to and any changes in suspension layout will be very difficult, if not impossible.

Aerodynamically, you can see what others have done and follow that trend if necessary. But if you have tripped up with the suspension layout then you are stuck with it.