Haas tweeted a short video of the new car emerging from the garage during its promotional day of running in Bahrain ahead of the start of pre-season testing tomorrow.

The VF-21 is heavily based on last year’s unsuccessful VF-20, as the team has opted not to spend its two available development tokens on the basis that it would be “pointless” to make short-term investments in what team principal Guenther Steiner described as a transitional season. 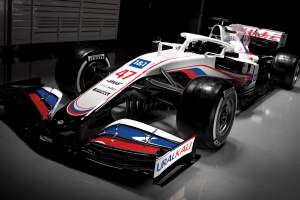 Nikita Mazepin was behind the wheel of the car, and Haas will be limited to a maximum of 100km of running today using Pirelli’s demo-specification tyres.

The VF-21 was in its new livery, which uses the colours of the Russian flag, and unlike the renders that were released of the car earlier this month the car was in genuine 2021 specification.

This includes the adaptations for the 2021 regulations, including the new floor that tapers towards the rear wheels.

The engine is understood to have made gains of over 20bhp this season after last year’s struggles.

Haas will not develop the car in season, but will instead focus its technical resources into the all-important 2022 car for the new technical regulations.