Ferrari ended a more promising Hungarian Grand Prix weekend very disappointed with its performance and an overall situation that the Formula 1 team “cannot be happy at all” with.

For the first time this season Ferrari got both cars into the final part of qualifying and locked out the third row, a few tenths slower than the Racing Points around the Hungaroring but quicker than Red Bull’s Max Verstappen.

It was a stark turnaround in Saturday form after a miserable two weeks in Austria, where the car’s straightline speed deficit and weaker qualifying engine mode were harshly exposed. 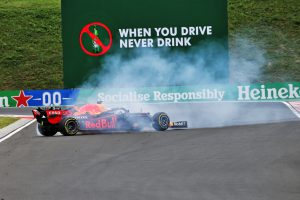 Track position is key for Ferrari given it has a faster race car than qualifying car so this was a golden opportunity to see how that compared more directly to the leading runners after a chaotic season opener and Charles Leclerc wrecked both drivers’ races at the start of the Styrian Grand Prix.

However, by the end of the race Sebastian Vettel was only sixth, and Leclerc failed to finish in the points entirely. Both cars were lapped, and even over a video call it was clear the team’s Sunday evening media debrief had a very glum atmosphere.

“Our race was very disappointing,” admitted Ferrari team boss Mattia Binotto. “We are all disappointed.

“After the quali we were hoping for a better race but it has not been the case. There is a lot to analyse.

“We need to understand our race pace, after a few races Ferrari cannot be happy at all of the current situations.

“It’s really disappointing. I think that we need back at Maranello our clear analysis of the performance of the car, of the team, and to address it as soon as possible.

“We need to work better.”

Ferrari was the architect of its own downfall with Leclerc, putting him onto soft tyres that were never going to last long. The team tried to pre-empt rain it was certain was coming, and was wary of the difficulty of getting medium or hard compound tyres up to temperature.

But others managed fine, including Vettel who effectively overruled the same strategy call a lap later. So Leclerc was a sitting duck and then out of sync with his immediate rivals, which led to him eventually being overhauled for even a single point.

“Putting Charles on softs was not the right choice, it put him in a difficult position and situation,” admitted Binotto.

“At the time we thought that putting him on softs would be right because we’re expecting rain shortly after but that has not been the case. Certainly it wasn’t the right choice.”

Digging into the race pace reveals a worrying picture for a car that’s meant to be quicker in race trim, especially on a circuit where the SF1000’s main flaws were better concealed

Ferrari’s push to fast-track its upgrades package has been well-documented but the Hungarian GP was the first opportunity to see it in action because of the team’s first lap disaster in Austria.

The result was disappointing enough as it pointed to a car that really wasn’t any quicker on Sunday than it showed on Saturday and a team that failed to make the most of the opportunity as well.

Vettel had a chaotic couple of races in Austria so this was his first experience of a ‘straightforward’ Sunday even if it still featured mixed conditions.

“Other people did better than us in terms of making their calls early on,” said.

“Obviously our ambition, our target is to do a better job than the others. So in that regard we fell a bit short.”

Digging into the race pace reveals a worrying picture for a car that’s meant to be quicker in race trim, especially on a circuit where the SF1000’s main flaws were better concealed. 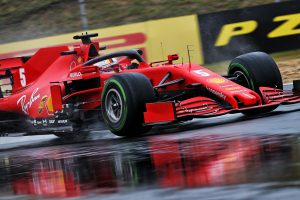 The danger of Ferrari relapsing to short-term thinking
Read more

Looking at the leading teams’ most comparable stints in the grand prix, Ferrari fared poorly. Vettel’s second stint was an average of 1m20.9s (with anomalies excluded), slower than Mercedes, Racing Point, Red Bull, McLaren and Renault. It’s difficult to draw too firm a conclusion from these stints because some teams ran longer after the initial switch to slicks than others, which skews the data.

“We’ve had three races, I had only two and the first one in Austria was very compromised,” he said.

“So in this regard it is positive, that the car’s performance on a Sunday was back to normal.

“But it’s also not a secret that our normal at the moment is not good enough to put people ahead under pressure.”

It’s also no secret that Ferrari’s finding this even tougher than it expected after insisting in pre-season testing it was in a spot of trouble.

But with no in-season engine development allowed and the car’s upgrades not transforming its fortunes, even in the midfield, this was a worrying end to the triple-header.

Ferrari was not expecting miracles in Budapest but would surely have hoped to head into the free week before the British Grand Prix with more of a spring in its step and some clear evidence of progress to use as a platform to progress.

Instead, apart from qualifying (which arguably flattered Ferrari given Red Bull underperformed) there’s little reason to think it will be anything other than a Q3-marginal car again at Silverstone.

And the team’s reserving its prognosis for a real recovery.

“It will take a long time,” is all Binotto would say. “I think patience will be required.

“As I said before, we need to improve all the areas, it’s not something that a simple trick will address it, or a simple solution.

“It will take time. How long? I don’t have the answer yet.”