Ahead of Wednesday’s hearing of the Renault protest of the Racing Point brake ducts, Ferrari has written to the FIA and Formula 1 chiefs requesting clarification on how the Racing Point methodology of ‘reverse-engineering’ its RP20 from last year’s Mercedes W10 can be considered as ‘design’.

Ferrari points to Appendix 6 of the F1 Sporting Regulations which state that a team can only use listed parts it has designed itself (the relevant section detailed below): 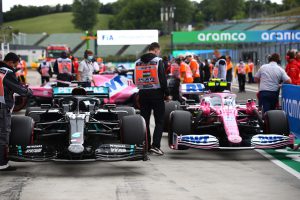 Ferrari is fully supportive of Renault’s protest, which aligns it also with the position of McLaren.

McLaren CEO Zak Brown said during the British Grand Prix weekend: “The majority of teams don’t like what Racing Point is doing.

“Whether it’s legal or not is up to the FIA to decide, but it’s outside the spirit of what F1 is.

“There’s always been a degree of copying but they have effectively admitted they replicated someone else’s car.

“The majority of us agree that’s not what F1 should be so we need to write regulations reflecting that.”

Ferrari has professed itself ‘perplexed’ at the pre-season interpretation of the FIA technical department that, having visited the factory and looked at the process used to create the RP20, it is satisfied Racing Point has met the sporting regulations.

McLaren, Ferrari and others argue that the Racing Point model is effectively a customer car by the back door and if customer cars are to be permitted, then the whole commercial agreement – which is otherwise said to be close to being signed – would have to be revisited.