The 2020 Formula 1 season was the most varied of the V6 turbo hybrid era in terms of winners and podium appearances, despite the very familiar story of Lewis Hamilton and Mercedes clinching the titles with ease.

For the fourth consecutive season, five different drivers won races but the number of teams that won rose to four – higher than in any of the previous six years in the hybrid era. There were also more drivers (13) and teams (seven) on the podium.

Ostensibly, that suggests the old adage about rules stability breeding closer racing being correct, although including the number of teams and drivers taking pole positions tells a different story.

Qualifying is the most representative indication of relative competitiveness, certainly in modern F1.

What’s more, it’s necessary to look at what might be termed ‘normal’ conditions to work out how many cars and drivers really could prevail in qualifying. 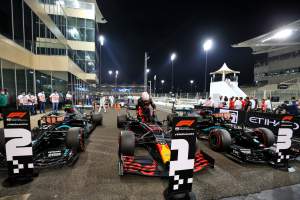 Last year, it was Mercedes almost all of the way. Verstappen’s Abu Dhabi pole was on merit, albeit assisted by the fact both Bottas and Hamilton struggled to extract the most from the Mercedes given tyre overheating.

But Stroll’s Istanbul pole position was circumstantial, the result of a fine performance but with the opportunity created by the wet, cold conditions in mid-November Istanbul.

You can take a similar approach to the victories. Pierre Gasly’s win at Monza for AlphaTauri was created by the timing of the safety car and red flag, while Sergio Perez’s in the Sakhir Grand Prix was only possible thanks to the Mercedes pitstop confusion.

Mercedes was only truly beaten on merit in terms of pace over the weekend once all year, again in Abu Dhabi.

A look at the gap between Mercedes, which has had the fastest car on average every year since 2014, and its pursuers is revealing.

Far from this presenting an encouraging trend, it suggests the variety at the front in 2020 was influenced more by problems, adverse weather conditions and mistakes than usual.

This is perhaps not a surprise given the condensed, rapid-fire season and the visit to unfamiliar circuits at times of year that often presented unusually cool conditions.

But there is a trend in the right direction if you look further down the grid, specifically at the gap between Mercedes and the midfield. 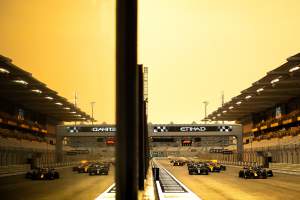 Since 2017, when the new aerodynamic rules cemented this big gap between the leading teams – usually three but dropping to just Mercedes and Red Bull in 2020 thanks to Ferrari’s disaster – has been closing consistently. On average, since 2017, the midfield has got 0.3% per year closer to the front each season.

If that trend continues this year, the leading midfielder would be just 0.9% off in 2021.

That’s still a big gap – a touch over three-quarters of a second around a 1m25s lap – but it’s definitely going in the right direction.

For more on the performance trends of individual teams in this era, it’s well worth reading Gary Anderson’s deep dive on the topic here.

But any such signs of progress will be rendered moot by the dramatic overhaul of the regulations in 2022.

That’s entirely necessary and given the tight constraints of the rules there’s every chance the spread of the field will remain at least as condensed, potentially even more so, in 2022 despite the usual F1 trends indicating rule changes stretch things out. That won’t start to become clear until pre-season testing in a year’s time.

Coming back to the original point, that of the variety of teams and drivers at the front, a comparison with the seven-year period preceding the V6 hybrid turbo era is instructive.

While on average the success is shared around a little more, particularly in terms of podium finishers, and the peak years are more varied, that figure of five different drivers and two or three teams winning also occurs frequently.

But for all the changes of rules, what’s essential to remember is that during the period in question the gap between the haves and the have nots has grown in F1.

The financial regulations, specifically the cost cap, introduced this year and the new Concorde Agreement that creates a more equitable share of the money shared by the teams will have an impact on the competitive spread – small at first but gradually growing in the long term.

How big an impact it will make, only time will tell. In the short-term, we can but hope that 2021 offers a closer fight at the front than what we saw last year, ideally with the midfield continuing to get a little closer to boost the chances of surprise results.