Sprint qualifying races will be held at three Formula 1 grands prix this season after team bosses and championship rulemakers finally agreed to try the new format.

The so-called Sprint Qualifying plan will feature a normal qualifying session on Friday that sets the grid for a sprint race on Saturday, which awards points to the top three finishers and establishes the grid for Sunday’s grand prix.

The first sprint qualifying will be held at the British Grand Prix, while the Italian Grand Prix will also be used.

Brazil was the third venue earmarked for the new format but has not been confirmed – the race is in doubt because of the COVID-19 pandemic and F1 has plenty of time to commit to the last trial, which it wants to be towards the end of the season.

HOW IT WILL WORK

Parc ferme conditions will apply from the start of Friday’s qualifying session which forbids the changing of “major components” for the rest of the weekend but “enough reconfiguration of the cars” will be permitted to make final practice on Saturday “a useful session”. 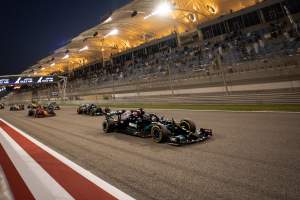 Weight distribution, engine and gearbox cooling can be adjusted after qualifying if the ambient temperature before qualifying and sprint qualifying varies by 10C or more.

Cars will be in full parc ferme conditions after the qualifying race.

If FP1 or qualifying is wet, teams will receive an extra set of intermediates but must return a used set before the qualifying race.

If ‘sprint qualifying’ is wet, teams can swap a set of used wet or intermediates tyres afterwards for a new set of intermediates.

Sprint qualifying had support from all 10 teams in principle but financial implications were known to be the main sticking point as the biggest teams felt they were already making huge efforts to meet the first-ever cost cap ($145m) that has been implemented for this season.

Mercedes and Red Bull had both voiced concerns that they had struggled to get beneath the budget cap and the potential for damage from sprint races would cause wider ramifications, as the amount of compensation being offered in advance was not sufficient.

To allay those concerns, F1 and the FIA have agreed that teams will be able to spend $500,000 on top of the budget cap to cover the cost of the three races, and there will be a mechanism for additional claims to be made in the event of accident damage.

Another concern over the idea was what it means for the weekend’s race winners.

The ‘sprint qualifying’ name is designed to differentiate it from the grand prix officially but some believe that will not matter when fans watch a Saturday race with a winner, especially as some points will be awarded as well.

Mercedes boss Toto Wolff said that the Saturday race “mustn’t dilute the attraction” of Sunday’s grand prix, while his Red Bull counterpart Christian Horner said it should be treated “almost like a pre-final” and it is made clear that a qualifying race winner is “not a grand prix winner”.