Our verdict on F1’s full plan for ‘sprint qualifying’ races

It’s official – Formula 1 will use a ‘sprint qualifying’ format in the form of an extra race on Saturday at three grands prix this year, and it has now announced full details of how the plan will work.

“We want to give fans engagement throughout the whole weekend,” said F1 managing director of motorsport Ross Brawn.

“Sunday’s grand prix is fantastic, and we don’t want to cannibalise that, but we want to lift up the engagement on a Friday and a Saturday.

“Friday is really for the aficionados at the moment. Watching practice sessions on Friday is fun but there is no conclusion to it.”

That’s what the man in charge of F1 thinks of it. Now here are our writers’ verdicts:

It shouldn’t be worth points

While completely open to Formula 1 experimenting with new formats, the awarding of points for the grand prix itself should remain sacrosanct. That’s not for reasons of tradition, which is a an insubstantial and universal argument used to defend any position of no change, but simply because it lessens the impact of the main event to have other parts of the weekend score too. 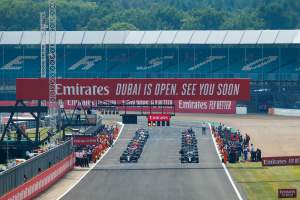 One of F1’s great appeals has always been the significance of the grand prix itself. The world championship is decided based purely on the results from however many grands prix are held during the season. The race matters, both for the current world championship and the history books.

A Saturday race that dictates only the grid doesn’t dilute that, but one that awards even a modest sum of points – in this case three for a win, two for second and one for third – does.

The points will have been attached to the race to raise the stakes, perhaps to ameliorate the fact that it’s a rather tame format tweak. But there already is a big prize at stake – pole position for winning the grand prix, which in itself confers a greater chance of a significant points haul on Sunday.

With the right format, there would be no need to incentivise the Saturday race – both for competitors and the audience – with a token sprinkling of points.

The sprint race idea has been around for a long time and originally came about because of the predictability of outcomes and a lack of wheel-to-wheel racing.

Addressing the latter point is the whole impetus behind the 2022 technical regulations, so probably the justification for a sprint race has changed. Now it’s just being pitched as something to inject a bit of variation into the weekend. It’s only for three races so let’s see how it goes. There’s a certain jeopardy involved in one of the title contenders maybe having a retirement on Saturday and therefore having to start from near the back on Sunday.

But there are always unintended consequences to changes in format, so these three races give an opportunity for these to become apparent.

Then, the desirability of continuing with the format can be judged from a better-informed place.

All we’ve really got here is an outcome that means the three grands prix in question will be 100km longer, and the first stint takes place a day early. How will that mix things up?

It sums up F1’s overly cautious approach that this is what it considers to be a brave new experiment. This is just fiddling around the edges.

This quote from the announcement stands out the most: “It also strikes the right balance of rewarding drivers and teams on merit while also giving others the chance to battle their way through the field on Saturday to increase their race chances on Sunday.”

What exactly about this format change is going to revolutionise F1 to the point that the cars that always qualify at the back can suddenly race their way through the field in a sprint race? That’s a deluded claim.

Perhaps there’s something they’re not telling us, and another change has been made that will allow Nicholas Latifi and Mick Schumacher to charge through the field to top-10 starting positions for Sunday’s race.

OK, it will be fun on the very rare occasions where a frontrunning car hits trouble in the sprint race – but even then, that driver has a full grand prix distance on the Sunday to make amends. And if the motivation for doing it is to mix up the grid then… let’s not have that argument again.

Looking for some positives: a larger percentage of the weekend’s track action being competitive rather than just practice is a good thing, because practice is dull. And who knows – if it turns out better than some cynics (hi!) expect, hopefully it will embolden F1 to try more ambitious things in the future.

F1 can do better than this

Last time F1 introduced a tradition-wrecking, tinker-y, gimmick-y addition, it was the fastest lap point, and I sure hated it.

And then the racing started, and I found myself doing a complete 180 – it wasn’t transformative or essential, but it was fine. It certainly didn’t ruin anything.

So, perhaps there’s a lesson in there for me to heed in pre-judging. But I will not be heeding it today – I hate this sprint race format idea and I think it’s both an egregious waste of time and a violation of F1’s core tenets.

Yes, there’s too much practice in F1 now, and FP2 seems ripe for chopping. Yes, an extra race start is nice. No, I don’t much care for the teams’ worries that this will create extra expenditure and engine part bureaucracy.

But I do care about F1 having one qualifying and one race, one polesitter and one winner. It works, it makes the GP weekend accolades special, and if you’re going to mess with it you should have a really good reason.

This is not that. This is someone’s first draft of an idea. F1 can do better than this.

And if this is the new CEO’s doing, and his idea of a best foot forward, then, quite simply, yikes.

An inoffensive but underwhelming experiment

Saturday races of any kind make total sense from a ‘give people at the track more to watch’ and give promoters/TV people something to sell. At worst it’s a sensible and inoffensive commercial experiment.

But it’s not something that I have high hopes or expectations for from a sporting perspective. I fear it won’t actually be that interesting to watch and it just helps the bigger teams more.

It’s fair to question whether this will have any actual fundamental sporting or entertainment advantage beyond dedicating more track time to racing rather than practice.

Only the biggest teams will be rewarded with points so in reality that probably just bolsters Mercedes’ and Red Bull’s tallies and helps their respective drivers.

And if any of the big guns has a qualifying drama or an early setback in the sprint qualifying race, they just have more time to make their way back to the front of the grid.

I’ll be happy to be proven wrong about this. And I firmly believe it’s right for F1 to trial such ideas instead of just blocking them for hypothetical reasons. But I have reservations about how successful it’ll be.

I don’t have any issues with a sprint race on a Saturday. I don’t think it is going to have a huge impact on the normal qualifying order for Sunday’s race and it should give fans at the track better value for money, with more competitive action to watch.

But I am not convinced by a full hour qualifying session on a Friday.

F1 has long been vocal about reducing costs over the last few years, so does it really make sense to spend a whole hour qualifying for an event that is in essence going to be a qualifying session for another race?

It would have been a much better approach to employ a short 20 minute session in which everyone battles it out for pole position. More drama and excitement all while reducing costs even further. A win-win for everyone.

Nothing about the sprint qualifying proposal excites me, but given it will only impact three of the 23 races it doesn’t bother me hugely either – it’s not like it will wreck the season either or completely skew anyone’s title bid.

Trying this idea with a three-race run in 2021 is also preferable to the times F1 has introduced concepts as fully-fledged parts of the regulations when they’d have been much better left as thought experiments (e.g. the attempt to adjust the not-broken-doesn’t-need-fixing knockout qualifying in early 2016 and 2014’s double points finale) and then had to backtrack.

So I just hope it uses these three events sensibly, takes a balanced view of the pros and cons, and then if there are more of the latter just focuses on the prospect of the 2022 tech rules revolution solving F1’s problems and lets sprint qualifying slip into the history books.