Formula 1’s proposed Saturday sprint race would reward the top eight finishers with points and determine the starting grid for the main grand prix on Sunday.

After being defeated in its quest to introduce a reverse-grid Saturday race at some grands prix last year, and again for 2021, F1 has devised a new plan for extra races and entertainment that avoids that contentious proposal.

This was first referenced by new CEO Stefano Domenicali last week but without any detail, and appeared to disconnect the race from the rest of the event.

However, it is now understood that the race would award championship points and be used to set the grid for the main event.

A qualifying session for the sprint race would be held in place of the usual second free practice session on Friday.

The sprint race would take place on Saturday, running at around one-third’s distance of the grand prix, and offer reduced points for the top-eight finishers, while also setting the grid for Sunday. 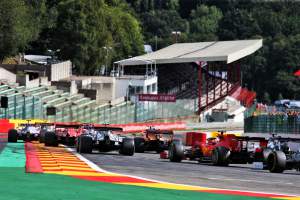 The Canadian, Italian and Brazilian Grands Prix have been targeted as the 2021 events where this format would be trialled.

F1 is believed to view the sprint race proposal as a compromise that sticks to the championship’s tradition of using a qualifying session to order cars in order of pace, while boosting fan engagement and offering more racing.

Replacing a Friday practice session, already reduced from 90 minutes to 60 for this year, with qualifying and then holding a race on Saturday would be expected to improve TV audiences and allow event promoters to attract a bigger crowd throughout the weekend.

It is likely to be discussed and voted on at a meeting of the F1 Commission on Thursday, when the mooted early engine freeze – key to Red Bull’s takeover of the Honda engine project from 2022 – will also be on the agenda.