Formula 1’s technical regulations will be tightened up next year to prevent the innovative Aston Martin rear wing endplate design first introduced at the Hungaroring being used.

Aston Martin’s interpretation of the regulations, which is completely legal, made it possible to bring back rear-wing endplates. The FIA had intended to outlaw such designs in order to minimise the turbulent airflow caused for a following car as part of its efforts to improve the ‘raceability’ of the cars.

But Aston Martin’s design team realised that by extending the permitted curvature of radius in this area, it was possible to create an unusually shaped endplate on the lower plane of the rear wing. This is what leads to the unusually bluff leading edge of the endplate.

This design has been used at higher-downforce tracks Hungaroring and Zandvoort, although the team used its conventional wing at Spa and Monza. Technical director Dan Fallows said the wing is “likely” to be used in Singapore given the high-downforce track will be well-suited to it.

Despite the design being legal, there was always the possibility that the FIA would tighten up the rules to prevent such designs becoming ubiquitous because of concerns it would work against the objective of the rules to improve the racing. 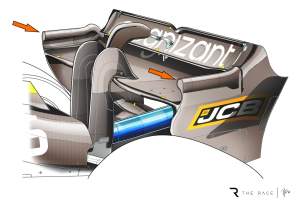 Although Aston Martin performance director Tom McCullough said when the wing first appeared that “we were able to show with simulations that it doesn’t have a material effect on that at all” in terms of its impact on the car wake, there are concerns that allowing these endplates to be adopted and refined by all teams would compromise the wake characteristics.

Aston Martin chief technical officer Andy Green told The Race that discussions in F1’s technical advisory committee have led to an agreement that the design will be outlawed for 2023.

“We completely expect it to be banned for next year because it’s not a route the FIA want to take, and they’ve told us that,” Green said. 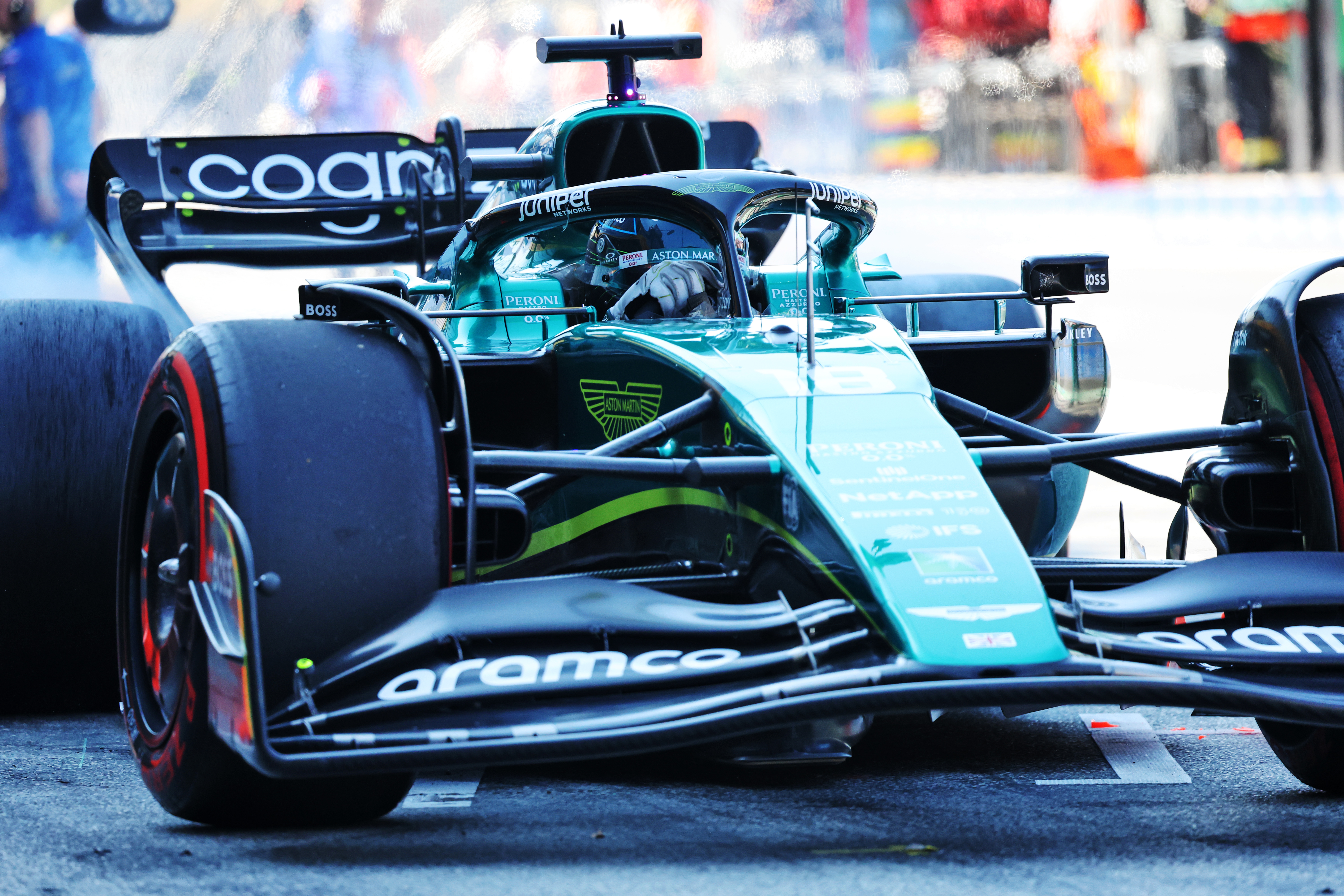 “We’ve had discussions in the technical advisory committee and everyone’s agreed that we will change the regulations slightly to not allow this design in the future.

“So the last you will see of it will be this year.”

When asked by The Race about the Aston Martin design, the FIA confirmed it was an unexpected one and that discussions are ongoing to adjust the regulations to prevent it being used from 2023 onwards.

“The endplate design wasn’t one that was anticipated for the 2022 regulations and the FIA is currently discussing potential adjustments for 2023 with the teams,” said the statement.

Aston Martin had to go through a lengthy process to prove the compliance of the design with the FIA, which started months before the wing was introduced in Hungary.

Green said that the FIA “reluctantly” agreed that the interpretation was legitimate even though it went against the intent of the regulations. As it was therefore legal, there was no grounds to stop Aston Martin using it. 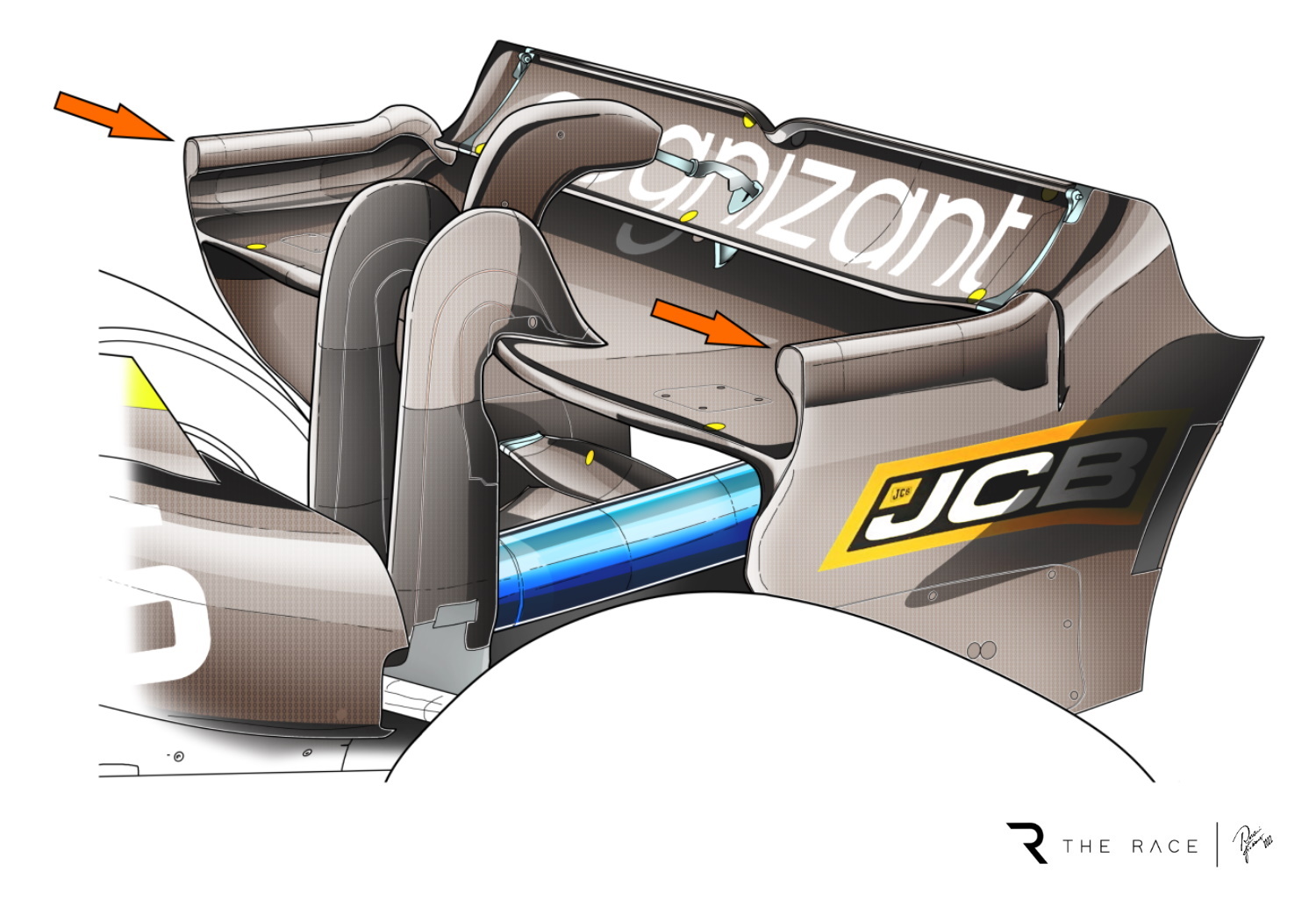 However, there is a principle in the regulations that allows the FIA to clamp down on designs it believes work against the objective of the rules. The Aston Martin rear wing design will set up powerful vortices that will be dragged along by the car and potentially contribute to the turbulent air behind it, rather than the airflow spilling off the edges of the wing.

“It was just part of our normal development, trying to read the regulations free of prejudice, which often can be [difficult] when you’re given the model of a car and F1 says ‘this is what your car is going to look like’,” said Green of the design process.

“It’s really difficult to read the regulations and come up with a solution that’s different. But you can do, you just have to wipe your mind clean of the F1 solution and that’s what we came up with. 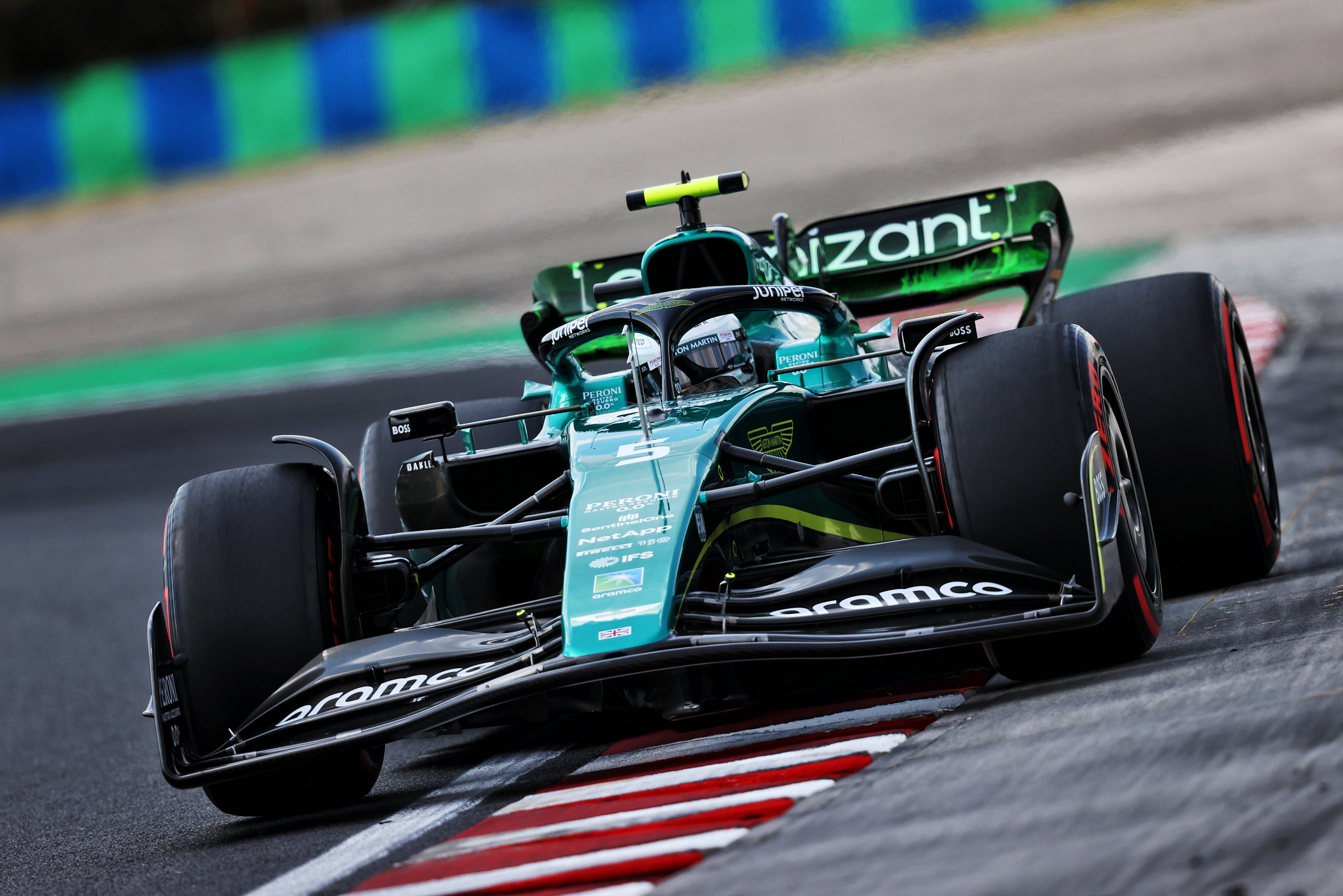 “It complies with everything that the regulations state the rear wing should be, it’s just not what they thought it should look like.

“We went through the process with the FIA over many months to make sure we were interpreting it right.

“They reluctantly agreed that we had interpreted it as written and they wouldn’t prevent us from running it because they could see no reason why.

“It was a good little morale boost for the team to show the rest of them that we do come up with our own ideas and we do have a clever bunch of people working here.” 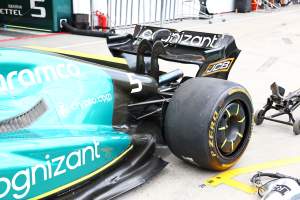 As The Race’s technical expert, Gary Anderson, explains, the design “is about containing the high pressure on the top of the wing for longer, partly by ensuring reduced transverse airflow and therefore delivering more downforce”. Aston Martin was able to do this efficiently enough to make it work on the high-downforce wing, although the team has said it could apply the geometry successful across the full range of wings subject to cost-cap constraints.

It’s likely most, if not all, teams would have adopted this design next year at least for high-downforce rear wing assemblies. But while Aston Martin can continue to use it to the end of the year, cost-cap constraints means it’s unlikely rivals will introduce their own version given the short shelf-life. However, were any to do so then Singapore this weekend would be the obvious time to do it.

While banning a completely legal design after a team has only had the chance to use it for half-a-season might appear unfair, it is in keeping with the objective of the rules.

Article 3.2.1 of the technical regulations refers to the “objective” of the regulations and the need for the FIA to ensure that the cars designed will “enable cars to race closely”. While this can’t be used to ban a design with immediate effect, the principle exists to allow the FIA to make modifications to close off such avenues in the future. Effectively, this does constitute an ‘intent of the regulations’ regulation.

“The reference to the intent in the regulations is in order to give a sort of moral high ground if something has gone off-piste,” said FIA head of single-seater technical matters Nikolas Tombazis last December.

“It’s to be able to discuss with the F1 Commission and to say, ‘Look, that was the intent, we shouldn’t forget it, we have a moral imperative to act on it’. 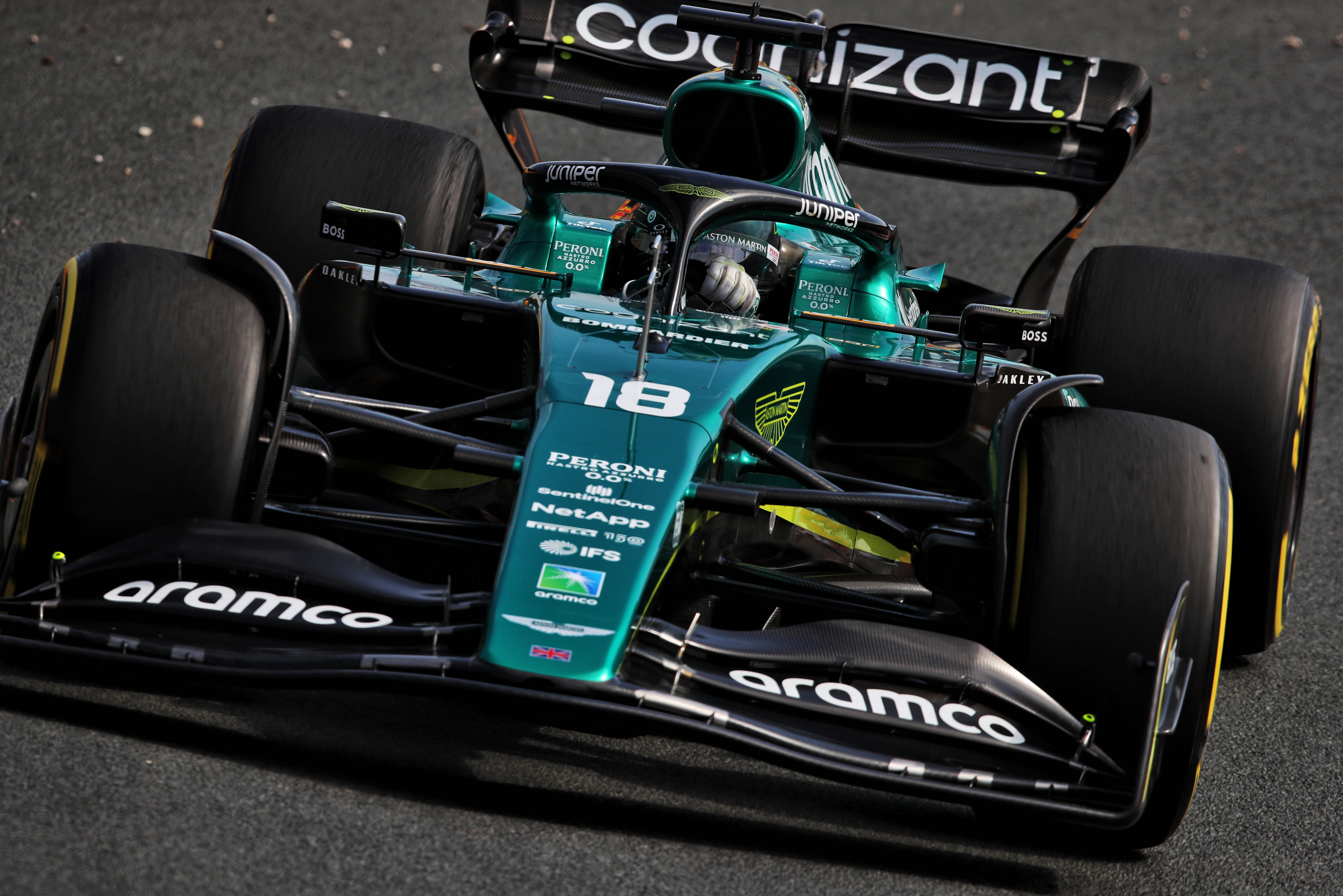 “It’s mainly to highlight the intention and to give us the position to discuss things openly and clearly with the teams and then the F1 Commission if we feel that things have gone astray for some reason.”

There was always the possibility that the regulations would be changed to prevent the Aston Martin design, although the new wording has yet to be formally signed off.

That won’t make it any less frustrating for the struggling Aston Martin team, which proved its ingenuity by coming up with an interpretation of the rules none of its nine rivals hit upon. But as team principal Mike Krack said in August, “if the rules are changing or these kind of design are not allowed, we will cope with it”.