The FIA has detailed how Formula 1’s pre-race anti-racism stand will be conducted at the British Grand Prix to provide “clarity and reassurance” to drivers concerned it was too rushed.

World champions Lewis Hamilton and Sebastian Vettel, plus the likes of Renault’s Daniel Ricciardo, had called on organisers to make the display more organised after an official ‘ceremony’ was held at the season-opening Austrian Grand Prix then made less formal at the next two races.

This led to a situation several drivers felt was “rushed” and not befitting the cause, and it also barely featured in the television coverage.

However, after intervention from the Grand Prix Drivers’ Association, F1 and the FIA have agreed to return to a similar approach to the one rolled out at the Austrian GP, making the End Racism stand a prominent and official part of the pre-race activity.

The formation lap will begin at 14:10 local time, and at 13:52.30 the PA system will alert drivers to walk to the “carpet runner” wearing black-coloured T shirts with the End Racism message on it.

A banner with the same message will be placed across the width of the track and the drivers will stand by their name card.

At 13:53, the drivers in their positions will be shown on the world feed and after a message acknowledging this is being done “in recognition of the importance of equality and equal opportunity for all”, the drivers will be free to make their chosen gesture.

Several drivers including Hamilton and GPDA director Romain Grosjean would like all 20 drivers to ‘take a knee’, but the FIA has reiterated that “as a mark of respect each driver, as an individual, may choose to mark this moment with their own gesture”.

The FIA has outlined several recommended gestures including kneeling, standing with their arms crossed in front or behind them or with their heads bowed, pointing to the message on their t-shirts, placing their hand on the heart or “anything else a driver may feel comfortable to do”.

The ceremony will be concluded after around 30 seconds with a message reiterating “this statement of support to end racism in the world”. 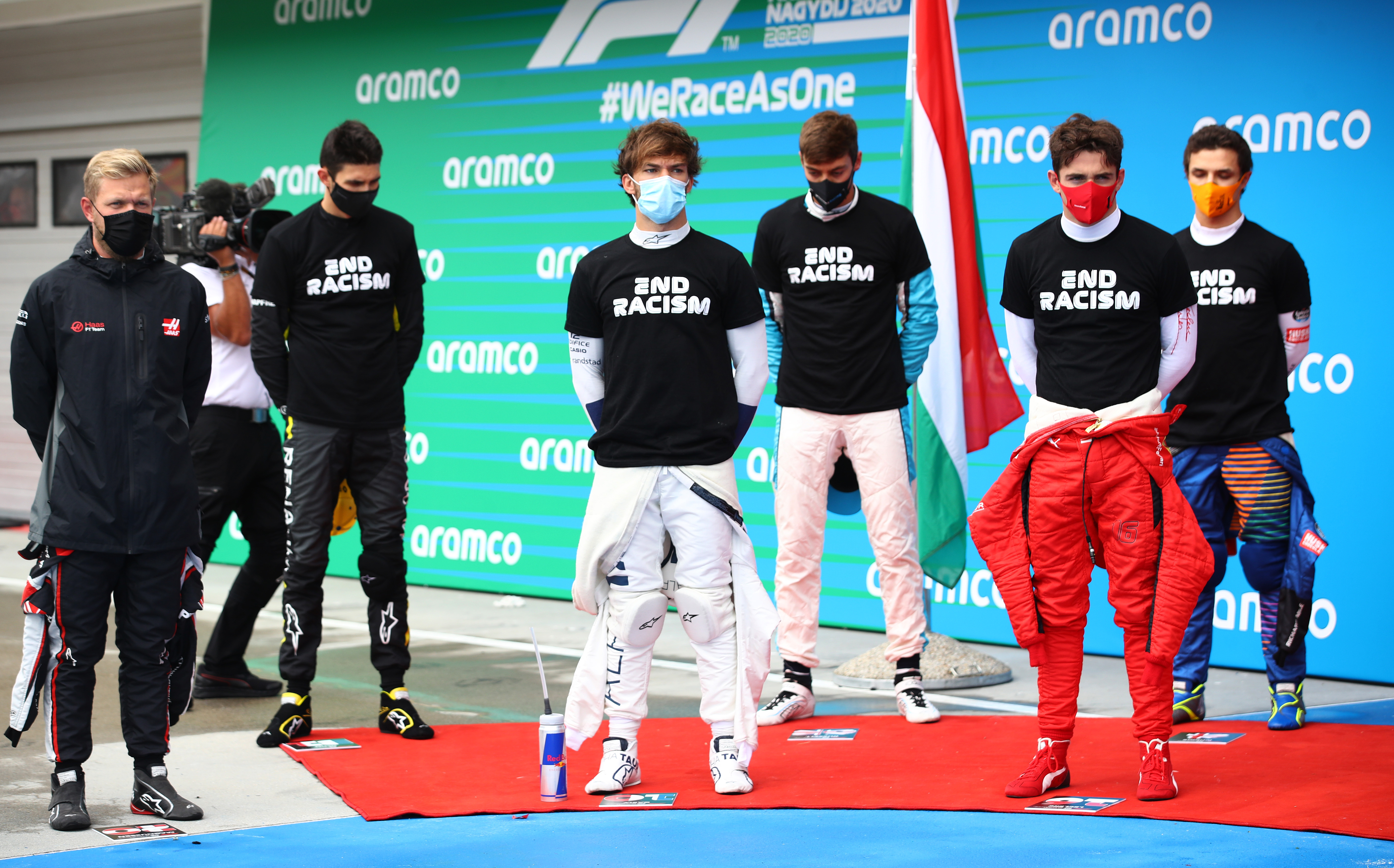 FIA race director Michael Masi wrote: “I hope the above is clear and provides some clarity and reassurance to the drivers.

“The FIA, F1 and F1 teams’ communication directors will continue to manage the media expectations on how this gesture will be marked, and that each driver is united in the call to end racism and will choose their own gesture at the determined time to mark this.”

After that the national anthem will be played before a two-minute ‘Thank you NHS’ Spitfire flyover, acknowledging the efforts of the UK’s health service.

This will be accompanied by a minute’s applause on the grid, in team garages and paddock and among personnel and marshals around the circuit.