Did Raikkonen stay too long in F1? Our verdict - The Race
Skip to content
Formula 1

Did Raikkonen stay too long in F1? Our verdict

Kimi Raikkonen has had one of the richest careers in modern motorsport. Whether it’s leaving Formula 1 for rallying, coming back with Lotus or avoiding retirement to switch from Ferrari to Alfa Romeo, he’s had a bit of everything.

At one stage he was undoubtedly among F1’s fastest drivers, but at 41 years old he’s stretched his career at the top level to the very limit.

Our writers assess if this was the right time for Raikkonen to call it a day, or if hindsight has proven he missed the opportunity for another, more appropriate ending to a sparkling career.

His later years didn’t inspire like his earlier ones

I thought Raikkonen attacked the challenge of slipping into F1’s midfield rather well and certainly felt he continued to contribute something to F1 after being pushed out of Ferrari.

Arguably this year was one too many. He’s slipped in qualifying even though some of his Sunday performances have been as good as any over the last few years.

But the post-comeback version of Raikkonen from 2012 onwards never captured my imagination the way his first career did – specifically his McLaren years.

The name will always conjure images of the outrageously fast Kimi who lit up the early 2000s and was surely the quickest driver in F1, if also the least lucky. Rapid qualifying laps, dominant race performances and engine failures – that’s how I’ll remember him.

With that in mind, claiming he stayed in F1 a year too long feels needless. For many people, Raikkonen will be loved for what he achieved much earlier.

He’s always had something good to offer

It’s been a long time since Kimi Raikkonen was at his best in Formula 1. But his longevity and determination to continue does him great credit.

The record for race starts he holds means little to him, it’s that of a driver who has had something to offer in F1 for two decades. And few drivers can say that.

While his later years lacked the razor-sharp edge of his brilliant best, when he was arguably the quickest driver in F1, he was still a consistent and intelligent performer.

He hung around in a top seat with Ferrari a little longer than his performance level merited, with Alfa Romeo his combination of sensitive and precise feedback and ability to deliver controlled and usually error-free race drives was of real value to the team.

While his peak didn’t last long enough, at his best he was astonishingly good and he merited at least one world championship from his McLaren years, with unreliability often his enemy.

His second career was very different, but his classy drives with Lotus in 2012/13 – and that great day at Austin in 2018 when he took his final win – show what he was capable of. 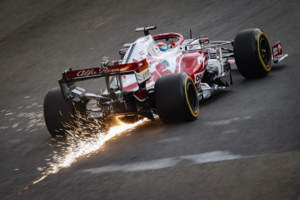 He may have gone on too long and it was frustrating that the driver of the first decade of this century was all too rarely rarely on show in the second, but by any standards it has been a remarkable career.

When we think of his longevity, it tells of someone with a genuine love of competition at the top level. But it will always be those performances in the silver McLaren that are etched indelibly in the memory.

Few drivers can say they were once the fastest in F1. Raikkonen can, and that means a lot.

It’s time for a young driver to get a chance

When it’s time to go it’s time to go, Kimi has been around more or less for 20 years, he has won many races and one world championship, that’s something that many F1 drivers can only dream about.

He is someone that just simply likes driving the wheels off a car. Unfortunately, since his world championship with Ferrari in 2007, he has not had the car to do so.

Yes, on a few occasions with Lotus or whatever it was called at that time, he put in some good results but the consistency of a competitive car was never there.

At Alfa Romeo he was treading water. If the occasion offered itself to him he would make the best out of it but when he was going home on a Sunday night he knew that, given a better car, much more was possible.

I think it’s very galant of him to throw in the towel, he could have kept going for a few more years but opening the door to a young driver like he was when he got his big chance with Sauber shows he understands what it’s all about.

Now Alfa Romeo has to make the right decisions and plan for the future, there are lots of young Kimis out there just needing a chance to show their talent.

The right time for Raikkonen to retire was probably when he lost his Ferrari drive to Charles Leclerc for 2019.

But Raikkonen doesn’t do conventional. And it was a pleasant surprise to see he enjoyed being an F1 driver so much that he was willing to step down the grid with Sauber/Alfa Romeo to stick around.

That was slightly unexpected for someone whose never given off much of an impression of being in love with F1. But he’s always been about the driving, and could take or leave everything else about the F1 circus. Moving down the grid, and the reduced attention that came with it, would have allowed Raikkonen to focus more on the bits of the job he’s always had enthusiasm for.

The time is right for Raikkonen, for F1 and Alfa Romeo to move on now. This is a decision that suits all parties.

This won’t be popular with the vast army of Kimi acolytes around the world but the enigmatic Finn should have packed up his helmet bag at the end of 2013, his second and ultimately disappointing season with Lotus.

The stats back this up. 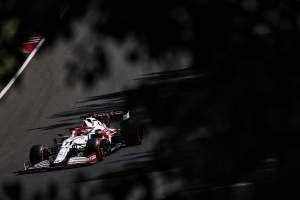 That is not to say that his first epoch was usually brilliant and between 2002 and 2009 he was a mighty force. All those things are true.

But the fact remains that he should probably have made more of the Lotus E20 in 2013 and at least properly challenged for a second title. After that he was simply racing for his own pleasure and an enhanced pension, and in patches he did it well.

Hindsight is golden but recent form proves decision is right

While Raikkonen’s switch to Alfa Romeo was seen by some as a career move too many, he proved in his first couple of seasons with the team that he still had something to offer.

He may not have shown the pace he had from his early days at McLaren but he was still capable of grinding out results and his first lap at Portimao last season demonstrated that he still had the racecraft of a wily old fox when given an opportunity. 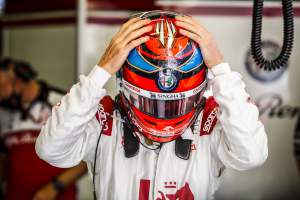 But for all that, it’s clear that big cracks have started to appear in Raikkonen’s driving standards this year and there’s been a sense that he’s not as motivated as he once was.

Unlike last year’s Portuguese Grand Prix, this year’s race ended embarrassingly after he collided with his teammate on the second lap – having been distracted by settings on his steering wheel – before having a very odd collision with Sebastian Vettel on the final lap of the Austrian Grand Prix.

And just last weekend, he had another unforced error, crashing into the pitwall in FP1, causing damage to his front wing.

With the benefit of hindsight it’s easy to say Raikkonen should have bowed out at the end of last season, but with regular errors now starting to creep in, announcing his retirement today is definitely the right decision.

Raikkonen won’t be ending his career on a high, but that doesn’t matter.

Regardless of his recent performances, the blistering pace he showed early on his career coupled with his unique character and legendary team radio exchanges means fans will always hold him in the highest regard.