Mercedes’ petition to get the Brazil incident between Max Verstappen and Lewis Hamilton reviewed will not be ruled upon until Friday.

The Sao Paulo Grand Prix stewards reconvened virtually on Thursday at 5pm in Qatar to hear from Mercedes and Red Bull representatives after Mercedes invoked the right of review process. 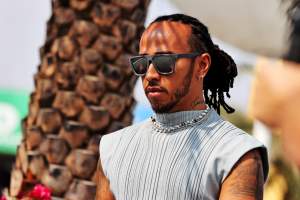 Mercedes wanted the stewards to reassess the Turn 4 incident between the two title rivals after Verstappen carried too much speed into the corner and went off-track, with Hamilton taking to the run-off as well after trying to pass Verstappen on the inside.

The incident was noted but not investigated and no clear explanation was given for the lack of action.

This initial hearing is simply to decide whether there is another stewards hearing to fully investigate the original incident.

The stewards’ discussion took place over several hours, with a brief interlude, before it was confirmed to The Race that the decision will not be revealed until Friday.

“Following today’s hearing with representatives from Mercedes and Red Bull, the stewards are now considering the matter and will publish their decision tomorrow,” a statement given to The Race said.

The same thing happened last weekend in Brazil when the stewards adjourned a hearing into a technical infringement regarding Hamilton’s rear wing after qualifying.

There will now be no information until Friday. First practice for the Qatar Grand Prix is scheduled to take place at 1.30pm local time Friday.

Verstappen leads Hamilton by 14 points in the drivers’ championship while Mercedes has an 11-point lead in the constructors’ standings with three races remaining.