Jenson Button has revealed how close he came to racing for Ferrari in Formula 1, with a possible move eight years ago progressing as far as contracts being drawn up.

In an interview with Motorsport News, Button explains that the move “almost happened” before he opted to remain with McLaren.

It was widely reported at the time that Button held discussions with Ferrari about a possible move for 2013, while he was also talked of as a candidate for the 2014 race seat that went to Kimi Raikkonen. 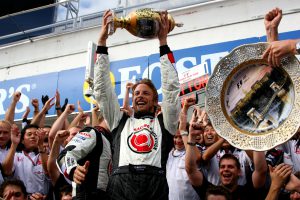 But it wasn’t revealed that the possibility of a Ferrari drive, which Button says would “possibly” have been alongside Fernando Alonso, had advanced as far as preparing contracts.

“Every driver would love to race for Ferrari at some point,” Button told Motorsport News.

“There’s just something about that team, even this year [2020] it’s tough for them and tough for motorsport fans to see them where they are, but maybe they needed this to come back stronger.

“But I would love to have raced for Ferrari and there was a good possibility sort of eight years ago but it just didn’t materialise at the end.

“Pretty much contracts were ready to go and it almost happened, but for many different reasons it did and, to be fair, I was probably better off where I was anyway at McLaren.”

Button joined McLaren in 2010 on what was originally a ‘2+1’ deal – meaning two seasons plus a third-year based on options in the contract. He made an instant impact, winning two of his first four starts for McLaren in Australia and China.

A new long-term deal was signed starting in 2012 to replace that, eliminating the possibility of a 2013 switch, which would tie in with Button saying that it would have been eight years ago.

Button raced for McLaren for seven seasons, with a further one-off appearance in the 2017 Monaco Grand Prix in place of Fernando Alonso. In total, he made 136 starts for McLaren, but his eighth and final victory for the team came in Brazil at the end of 2012 prior before its slump in competitiveness.

A move to Ferrari in 2013 could potentially have led to more wins for Button given that was when McLaren’s current victory drought begun. Ferrari won two races in ’13 and, after a poor 2014 in the first year of the hybrid engine regulations, it returned to winning ways with Sebastian Vettel in ’15.

Button’s move would also have had a significant impact on the driver market, particularly given McLaren might have faced having to replace both him and Hamilton for 2013.

Button is one of a number of big-name drivers who had discussions about a move to Ferrari during the 2010s.

Robert Kubica confirmed in 2018 that he had signed a deal to move to Ferrari for 2012 before his crash on the 2011 Ronde di Andora rally that kept him out of F1 for eight seasons.

Nico Rosberg and Mark Webber also had talks with Ferrari about a possible move, but opted to remain with Mercedes and Red Bull respectively.

MOST STARTS FOR McLAREN