Alonso used ‘anger’ to finally get the most out of Alpine

May 2 2021
By Valentin Khorounzhiy
6 Comments

Alpine Formula 1 driver Fernando Alonso says the Portuguese Grand Prix marked the first race of his return where he “was extracting the maximum of the car”, which was aided by him channeling the “anger” of his Saturday disappointment.

Portuguese GP qualifying marked a low point of Alonso’s tough F1 comeback so far, as he got eliminated in the second segment and got beaten by team-mate Esteban Ocon to the tune of nine tenths of a second.

But on Sunday the two-time champion shrugged off the poor qualifying to produce an excellent race from 13th on the grid, charging up the order to eighth place in the final laps. 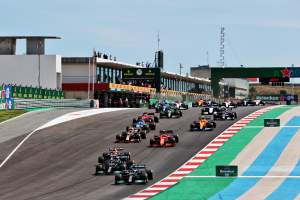 Having swapped for fresh hards after a long initial stint on mediums, Alonso battled past Daniel Ricciardo, Pierre Gasly and a struggling medium-shod Carlos Sainz Jr to come home in eighth place.

Perhaps even more encouragingly, he was only 1.059s off team-mate Ocon at the chequered flag.

Speaking to Sky Sports F1 after the race, Alonso described it as “good” and “fun” and said it represented a clear step change from his previous two grands prix.

“Bahrain I was more careful on everything,” he said. “You have to complete the first grand prix.

“Imola, I was so uncomfortable with the car, with the conditions. I didn’t feel good on the inters, the visibility [was low]. 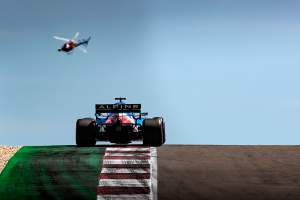 “So this is really the first race that I was extracting the maximum from the car and yeah, I was upset after yesterday’s qualifying, so today that anger was probably on track as well.”

Alonso stressed that the lack of grip “remains a mystery” that will need resolving, as he vowed “to get better next Saturday”.

“Barcelona, Monaco Saturdays are very important because you cannot overtake, so I still have some homework to do if I want to start a bit forward,” he said.

The Portuguese GP has tripled Alpine’s points haul for the season so far, and Alonso agreed the team was “in a different group of cars” at Algarve compared to Bahrain and Imola.

He added: “We were fighting with one McLaren, one Ferrari, things that were unthinkable in Imola, Bahrain, so I think we made a very big step forward in terms of the car performance.”