Albon totally thrown by car change on softs in qualifying

Alex Albon put his Q2 elimination in Sakhir Grand Prix qualifying down to failing to cope with the way his Red Bull Formula 1 car’s behaviour changed on soft tyres.

Albon, who is still yet to secure his Red Bull seat for 2021, failed to reach Q3 for the third time this season as he ended up 12th on the grid in Bahrain.

He said the car “just felt very different” on soft tyres, having focused on running mediums in final practice to save softs for qualifying. 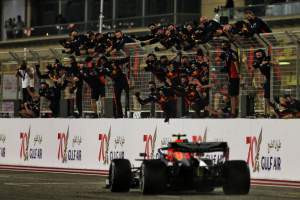 The task facing Albon after his inconclusive podium
Read more

Asked by The Race what the limiting factor had been, Albon replied: “I’d say mostly we had a balance [issue] in FP3, and really just did some balance changes to fix the car going to qualifying but I think lacking some soft tyre running in FP3 could have hurt us.

“With the soft tyre you gain a lot from grip at the apex basically. And it was just tricky to balance because we were missing some front in some places, and having too much front in other places, on the soft tyre.

“So it wasn’t so simple as just finetuning it with a flap or front wing, which is normally the case.

“It’s very clear where it is. I could tell you where I was slower without looking at the data.

“Obviously it’s a lesson learned and it’s more experience from my side, but it just meant that when it came to qualifying it was tricky to get the low speed and the high speed – Turn 7/8, that was really the main area where I lost out – feeling well balanced.”

Albon was 0.379s slower than team-mate Max Verstappen in Q2, which Verstappen topped. He went on to qualify third.

Red Bull has postponed its decision over Albon’s future to the end of the season.

It has repeatedly shown willingness to keep him into a second full campaign in its top team, but been frustrated that Albon cannot produce his best form consistently, or stumbles again after apparent breakthroughs.

Though he took his second podium finish last weekend, he inherited his third place when Racing Point driver Sergio Perez – who is Red Bull’s alternative option for 2021 – had an engine failure.

“I’ve had better ones,” he said. “It’s just frustrating really, because it was looking good on Friday and truthfully even Saturday, in the beginning, was OK.

“It was just one of those things where you drive your first lap in qualifying and it’s like, ‘oh, OK, this is very different to what we’ve been getting the whole weekend’.

“It’s not a nice feeling for anyone when it doesn’t come together. But the aim, or the focus, is not to be overly frustrated. We’ve still got Sunday.

“I’ve been in this position before and we’ve had good races. It’s just about putting it behind us and focusing on tomorrow.”