The Coanda Simsport duo of Josh Rogers and Mitchell deJong won their second BMW SIM GT Cup race in a row to earn themselves an extra $1200 each.

With four races in the series completed it means both Coanda Simsport and Team Redline have won two events each and will both have two different teams taking part in the BMW SIM Live event at the end of the year. 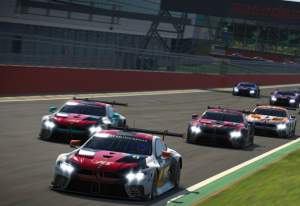 Rogers, who recently won his second Porsche Esports Supercup championship, took pole position at Road Atlanta and was unchallenged during his one-hour stint.

When deJong took over driving duties for the second half of the race he was able to extend the gap over second-placed entry Team Redline Red to 9.8 seconds come the chequered flag.

Previous winners Maximilian Benecke and Enzo Bonito were the pair of drivers that crossed the line in second. Since the drivers of both of the top two teams had already secured their place in the BMW SIM Live event, the tickets went to the team that ended the race in third.

MSi eSports were in the best position to begin with as Alejandro Sanchez qualified in second and kept that position until the pit phase.

During its stop the team elected to change all four tyres whereas most others only changed two, dropping them down to 10th place due to the extended stop.

Salva Talens replaced Sanchez and he worked his way up from 10th to fourth but was unable to overtake the second Coanda car driven by Jeremy Bouteloup and Charlie Collins for third place.

The final step of the podium means Bouteloup and Collins will join their team mates Rogers and deJong for the final event in December.

It wasn’t a perfect round for all of the Coanda entries as Dayne Warren was crashed into on the opening lap and eventually he took the decision to retire from the race.

At the start of the race Sanchez took a brief trip onto the grass which allowed Warren to pull alongside him, but as the MSi eSports driver Sanchez rejoined the track he turned into the side of Warren’s car and sent the Australian spinning.

The final race in season one of the BMW SIM GT Cup will take place in two weeks time and will include only 16 invited teams who have all failed to qualify for the BMW SIM Live final so far.

The top two finishers in the next race will both earn their places in the Munich based final before the second season of the BMW SIM GT Cup commences with a change of car for the drivers to race with.

7 mins ago GT No Comments