Toyota topped the first-ever Hyperpole qualifying session at the Le Mans 24 Hours in the hands of Kamui Kobayashi, Jose Maria Lopez and Mike Conway, but was made to work hard by the Rebellion Racing of Gustavo Menezes.

This year’s edition of the French classic has taken on a very different form, owing to COVID-19 related disruption and a newly-introduced qualifying format run between Thursday evening and Friday morning.

As expected, the popular public scrutineering in La Place de la Republique in the middle of Le Mans was cancelled, as was the Drivers’ Parade. More strikingly, the event is being held behind closed doors, with the swathes of campsites, restaurants, grandstands and surrounding areas leaving what is usually a bustling, hectic medium-sized city in the north of France, rather empty.

The condensed schedule has not, however, taken away from the spectacle of the event. Hyperpole was always going to be implemented for this year regardless of COVID-19’s efforts to reduce the itinerary. 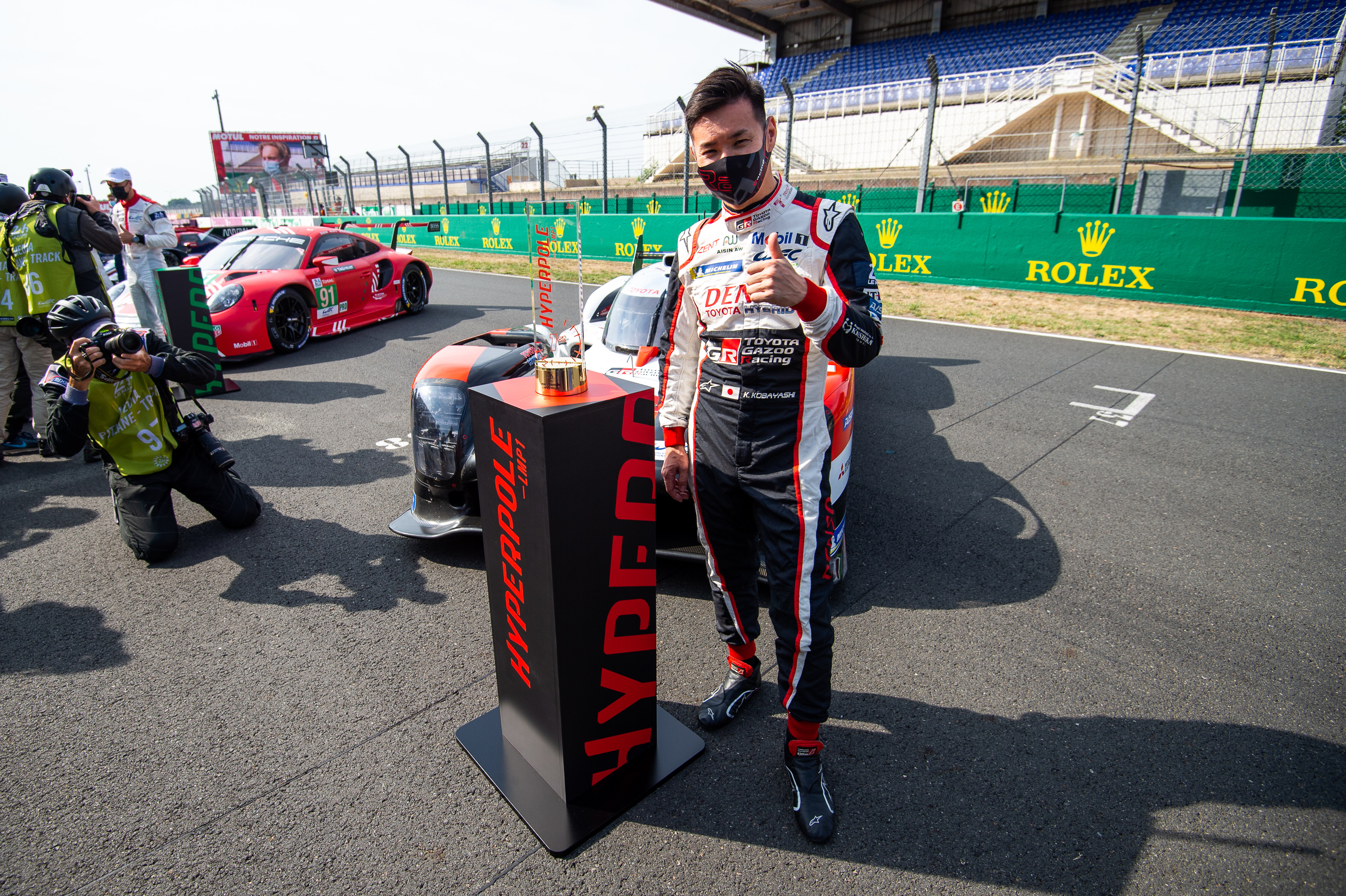 The Automobile Club de l’Ouest de France (ACO) and the FIA have moved away from the traditional three 90-minute qualifying sessions held over two days and brought in a compact 45-minute session on Thursday, after which the six fastest cars in each class (barring LMP1 where all five entries made it through) progressed to Friday morning’s half an hour Hyperpole session.

After topping both free practice sessions, drivers of the #8 Toyota Gazoo Racing TS050 – which has won the last two 24 Hours – Brendon Hartley, Kazuki Nakajima and Sebastien Buemi probably felt like they were in the pound seat ahead of qualifying. But it was the sister #7 car which topped the Thursday evening session.

Kobayashi came out firing in the Hyperpole, setting an initial benchmark of 3m15.920, some 1.504s quicker than Nakajima.

Practice did not give the impression that either Rebellion – which is brought closer to the pace of the hybrid Toyotas thanks to the Equivalent of Technology and success ballast introduced by the ACO and FIA – was capable of challenging the fastest times, but in Menezes the Swiss team threw a cat amongst the pigeons by posting the quickest time.

Menezes went nine-hundredths of a second quicker than Kobayashi, and although the Toyota was expected to pump in a quicker time, it was exactly the sort of uncertainty and excitement Hyperpole was intended to produce.

Kobayashi duly did improve, but only to the tune of half a second, while Nakajima was left rather rueful at being left on the second row of the grid alongside the #1 Rebellion – and winner of the 6 Hours of Spa last time out – of Romain Dumas, Bruno Senna and Louis Deletraz. 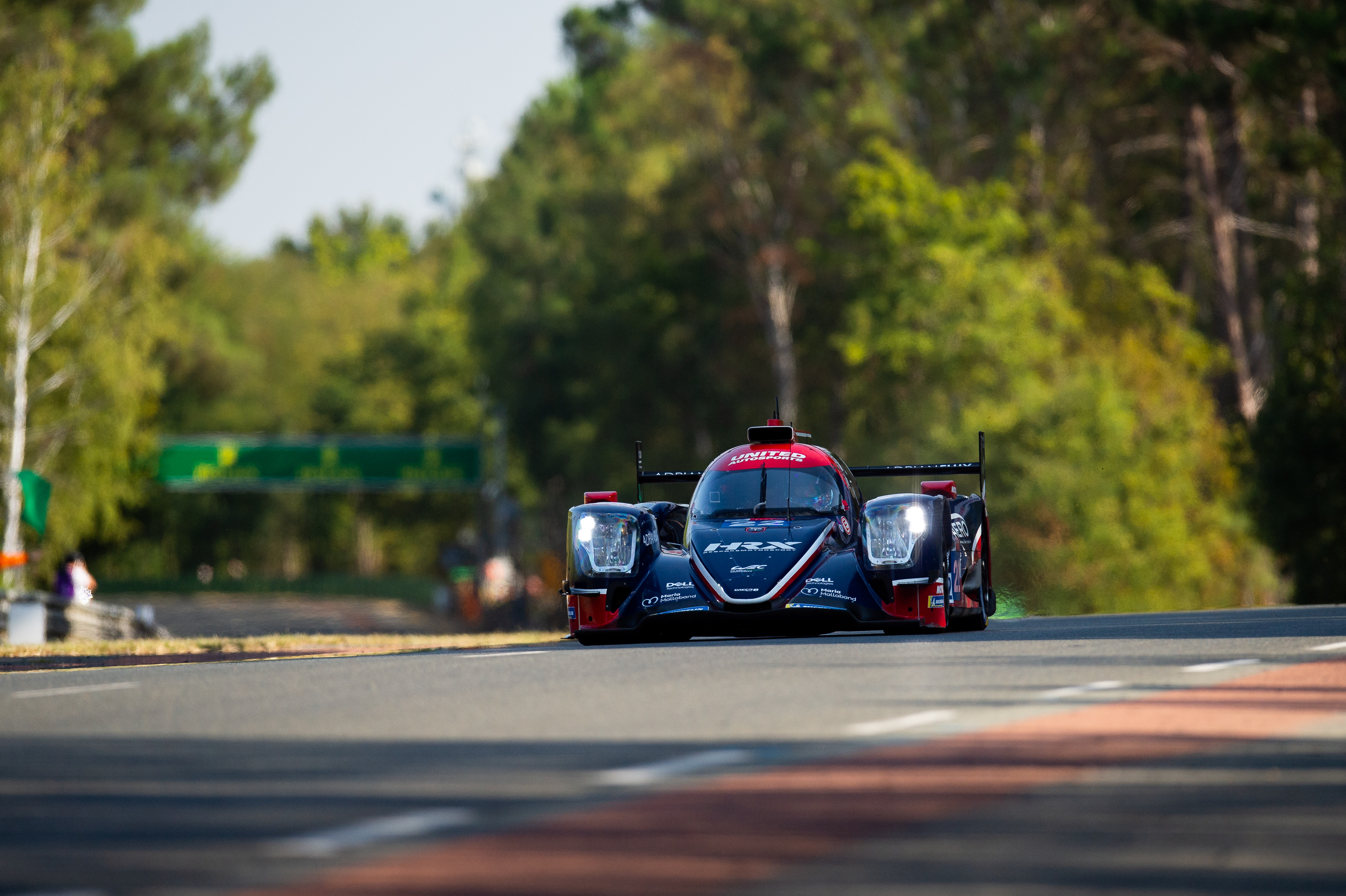 In LMP2, the United Autosports Oreca of Paul di Resta, Filipe Albuquerque and Phil Hanson will start from pole on Saturday after di Resta broke the class pole record time.

The class has the largest entry of the weekend, with 22 cars, and the action was frenetic and exceptionally close.

Jean-Eric Vergne was the closest challenger to di Resta in the G-Drive Oreca, finishing second-fastest, while the Racing Team Nederland machine of Nyck de Vries – shared with Frits van Eerd and Giedo van der Garde – was third despite a trip to the gravel at the Porsche Curves.

Others were not as lucky on Thursday, as both of the IDEC Sport cars suffered heavy damage following crashes in practice. The #17 of Jonathan Kennard, Dwight Merriman and Kyle Tilley was the first to hit trouble in second practice, putting the car out of qualifying.

Merriman, who was in the car during the accident, has subsequently been deemed unfit to race, with experienced Porsche driver Patrick Pilet filling in for the remainder of the weekend.

The second IDEC Sport car of Paul Lafargue was also heavily damaged in FP2 after going off at the second chicane, missing both qualifying sessions. Both cars will start from the back of the LMP2 grid.

With just six cars making it through to Hyperpole, a number of big names failed to make the cut. 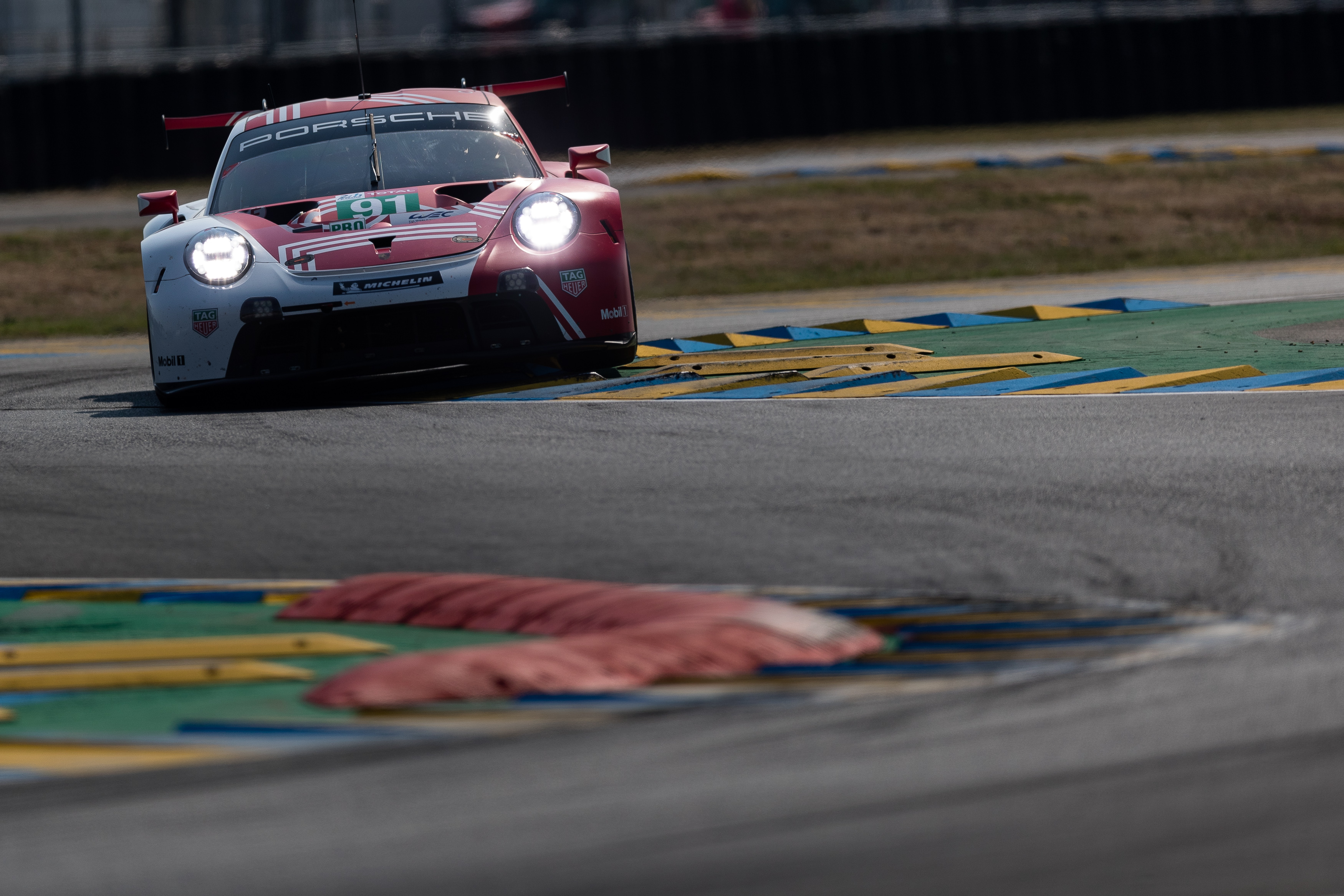 Porsche will start from pole in GTE Pro, with Gianmaria Bruni setting the fastest time in Hyperpole.

The Italian set a time of 3m50.874 to go two tenths of a second quicker than the AF Corse Ferrari of James Calado.

After topping practice on Thursday, the two Aston Martins of Marco Sorensen and Alex Lynn qualified the #95 and #97 Vantages in third and fourth respectively.

In GT Am, Luzich Racing’s Come Ledogar pipped the Dempsey-Proton Porsche of Matt Campbell to pole by just five-hundredths of a second in his Ferrari.

Team Project 1’s Matteo Cairoli was another three tenths behind in another Porsche. 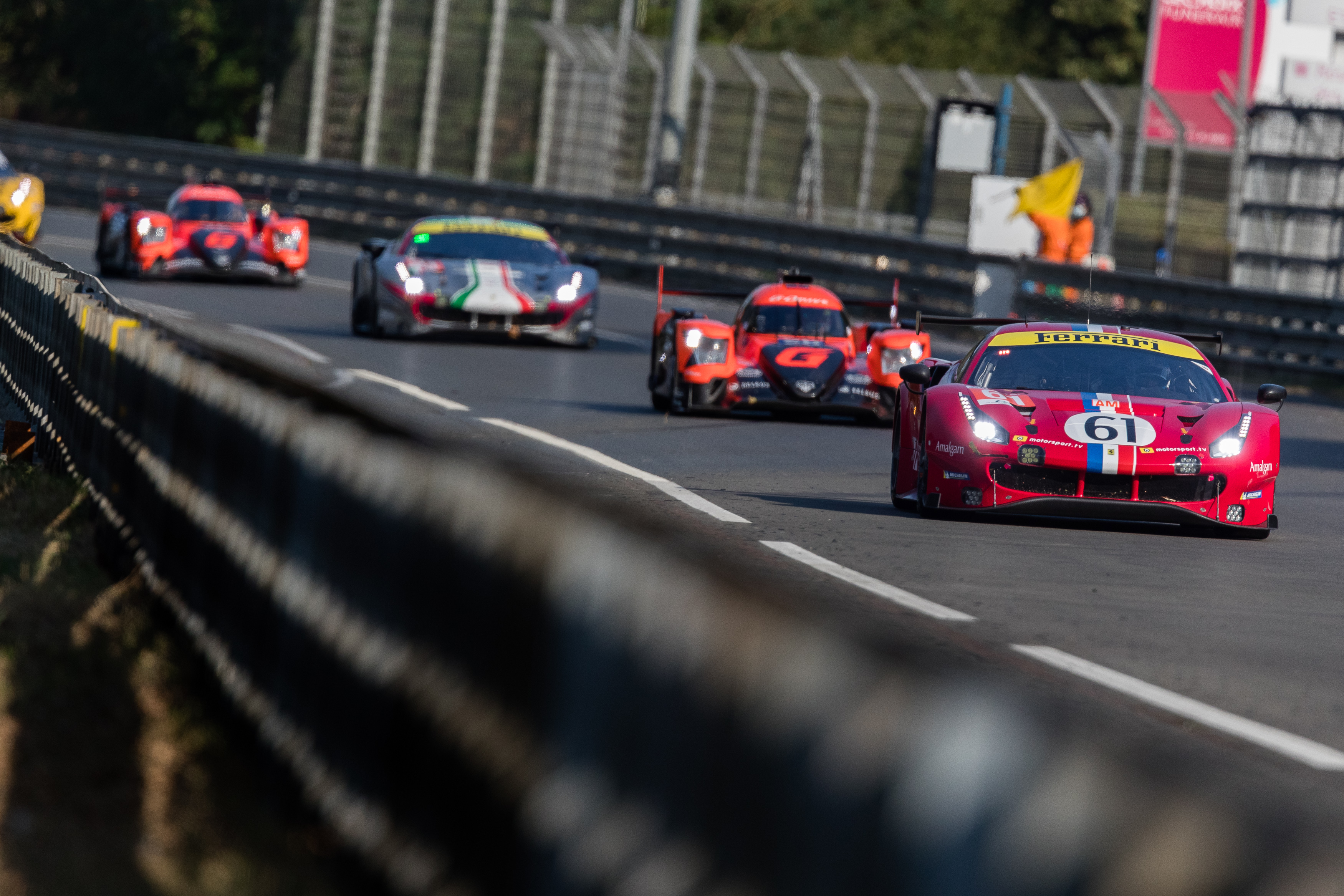 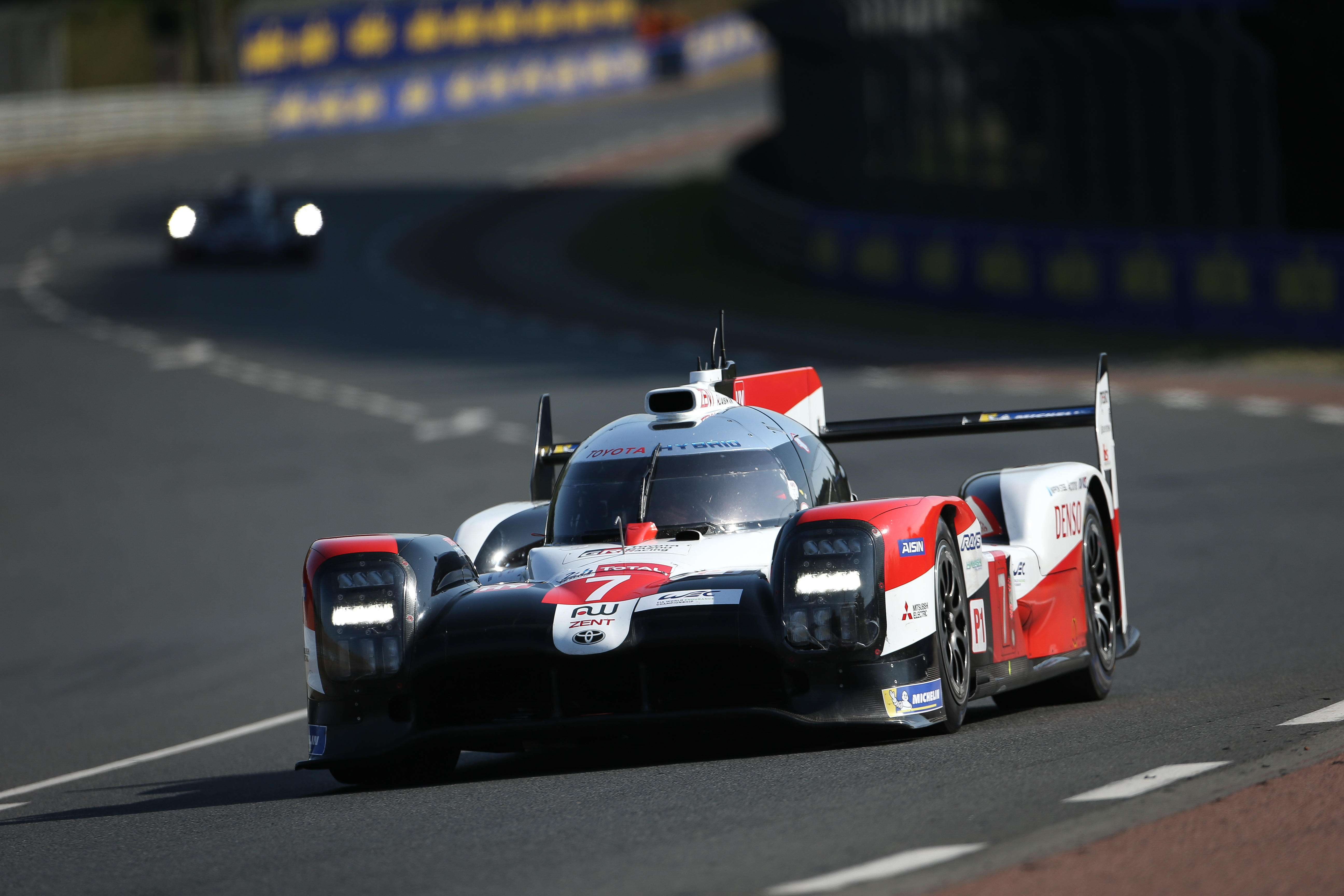 With Haas yet to make a 2021 signing, its current drivers face an "uncertain future", as Romain Grosjean names his favoured post-F1 options