May 29 2020
By Valentin Khorounzhiy
No Comments
Share this article

Reigning Le Mans 24 Hours champion Toyota has announced its line-up for the virtual version of the event this June, as have Aston Martin and Corvette Racing.

In the absence of the flagship LMP1 class from the virtual event, Toyota will field a pair of Oreca 07 LMP2s and will incorporate nearly its full World Endurance Championship driver roster, despite the rules only mandating two pro drivers – rather than simracing specialists – per car.

Aston will likewise have three real-world professionals in each of its three works Vantage GTE entries. 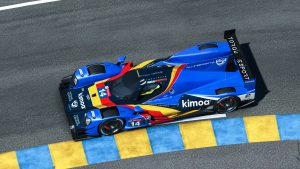 Another Pro Cup frontrunner Nicki Thiim will be in his usual #95 car with his regular team-mate Richard Westbrook and former junior single-seater prospect Lasse Sorensen, the brother of Aston Martin WEC driver Marco. That line-up will be completed by Manuel Biancolilla.

Corvette Racing has pulled out of the real-world Le Mans – which was initially scheduled for June but has now been moved to September 19-20 – this year, but will take part in the virtual event.

All-Star Series regulars Dennis Lind and Alen Terzic will join Tommy Milner and Jan Magnussen in the #64 Corvette C7.R, while the #63 car will be piloted by Jordan Taylor, Nicky Catsburg, Alex Voss and Laurin Heinrich.